Given the recent controversy about the lack of black editors hired at Marvel, one of our readers shared their review of the recent Comic-Con 2020 panel titled “Diversity and Comics: Why Inclusion and Visibility Matter” via the Comic-Con@Home 2020 channel on YouTube.
The panel was described like so:

This past year has witnessed the birth of transformational change in the social fabric. The Killing of George Floyd, Breonna Taylor, and Ahmaud Arbery (to name a few) has triggered a response to structural racism that has caused the nation and the world to take stock of its institutions. The growth of more diverse faces on the pages of popular comic books and in feature films has proven to be essential to reflecting the world in which we all live. And, despite the onset of an unprecedented pandemic, the inclusion of people of color, women and persons with disabilities and the LGBTQ community not only better reflects today’s culture, it has also proven good for the bottom line.

Diversity and Comics: Why Inclusion and Visibility Matter | Comic-Con@Home 2020
The poorly-integrated panel featuring race identity focused writers such as David F. Walker, hosted a good deal of credentialed award winners, and the panelists described a number of projects in which they were involved, yet nonetheless they still found it necessary to complain about a lack of opportunities, money, and too many white people. They bemoan the lack of a ‘Ministry of Culture’ in America that would give them salary (i.e., ‘comics socialism’) so they didn’t have to do crowdfunding like Kickstarter (which is hard!), and while they recognize offers stemming from Black Lives Matter riots as sort of cultural bribes, pseudo-reparations or a ‘black privilege,’ they don’t seem to be suggesting turning down any of the money (as the video’s description says, ‘it has also proven good for the bottom line’).
Check out some of these surprising highlights:
7:43 – taking “white space” into black/brown recreated space in graphic novels and TV (a.k.a. race-bending characters)
19:40 – need institutions to support creators with a salary (socialism > Kickstarter)
21:05 – ‘Ministry of Culture’ is needed to make space for certain creators that doesn’t involve the ‘revisionist implications of white folks’ to support comics
And an unexpected number of very anti-white, arguably racist comments and discussions.
If you aren’t sure how to analyze this video panel, here’s a simple exercise. What if all of these panelists were white, or any other race and saying this about a different race such as black, brown, or any other racial group? 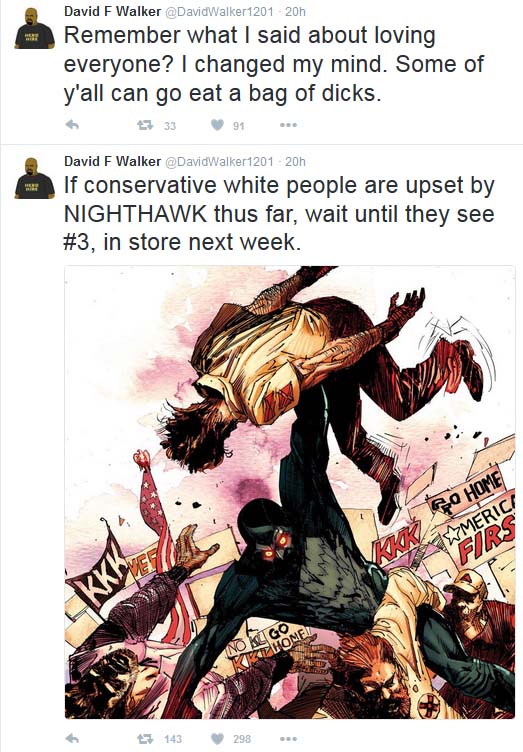 What this panel unintentionally suggests is that they are either unaware or unconcerned about their own possible racism. Since they seem to understand that they may actually be profiting off racism and racial violence, is that something they would promote in their own work to keep that money coming in? The bottom line is that the new racism, born in academia, and moving into popular culture, is just as ugly as the old racism. Hopefully these talented creators will awaken to that someday. They are in a land of opportunity.
Maybe when even the richest woman in the world is complaining about “white privilege,” we’ve reached peak identity politics. Is anyone surprised?

Billionaire Oprah lectures the rest of us:

“You still have your whiteness. That’s what the term ‘white privilege’ is. It means that whiteness still gives you an advantage, no matter.”

How do I get a refund on my white privilege??