Their philosophy is “Inside the Vault, it’s safe to be different.”

A year and a half ago, Vault Comics made one of the first public denouncements by a comics publisher of the comic customer revolt that had come to be known as “Comicsgate” after a mole using the Twitter name @LateNightComics who publicly aligned with the movement at first, one day started insulting Darwyn Cooke’s widow. 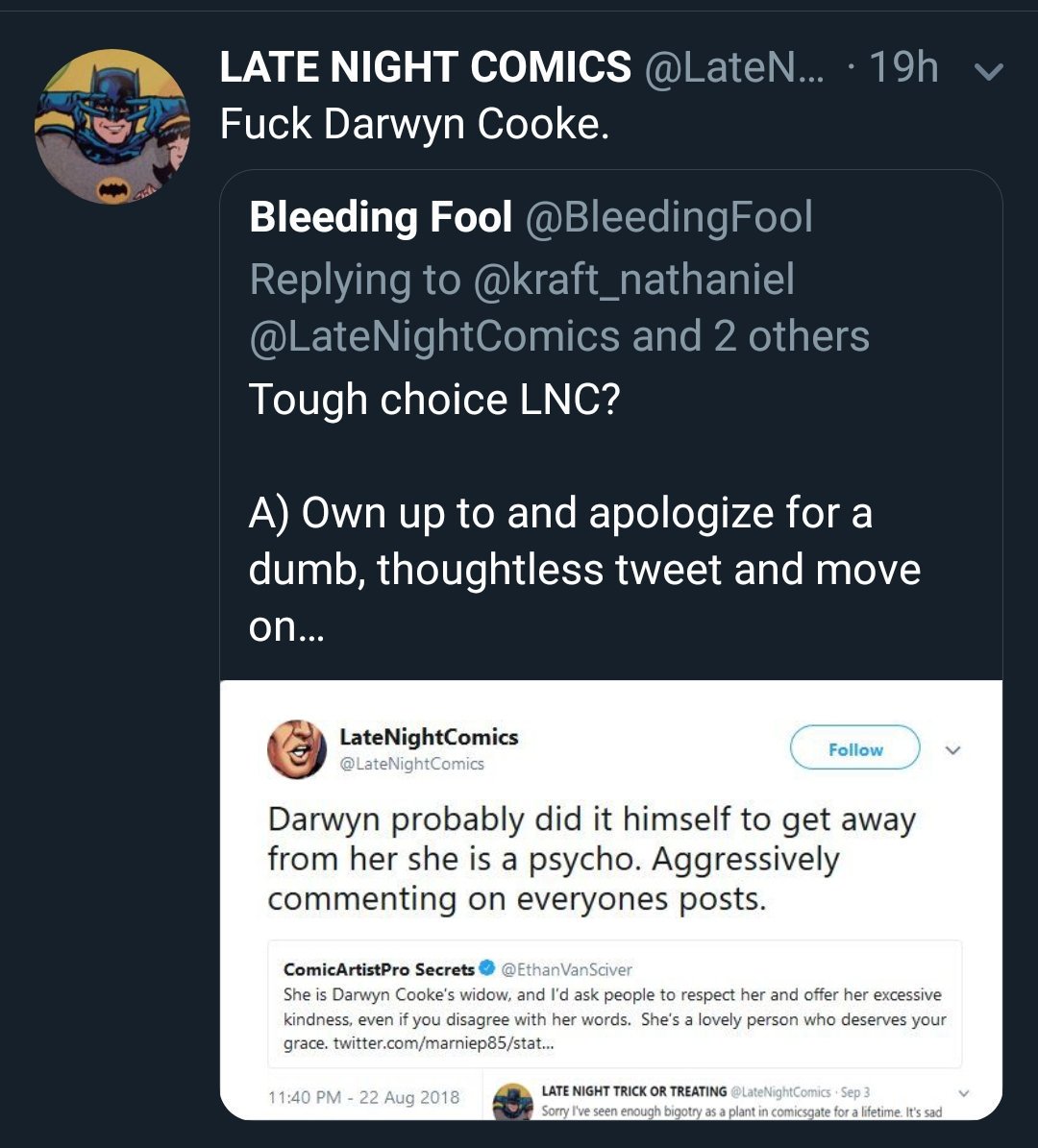 This character later claimed he had pretended to be pro-Comicsgate until he began aligning with creators and harassers who did everything in their power to trash ComicsGate on social media. For Vault’s part, they virtue-signaled to the ignorant press and were quickly praised by a like-minded sycophants and took this statement below as a gauntlet being thrown down against ComicsGate. 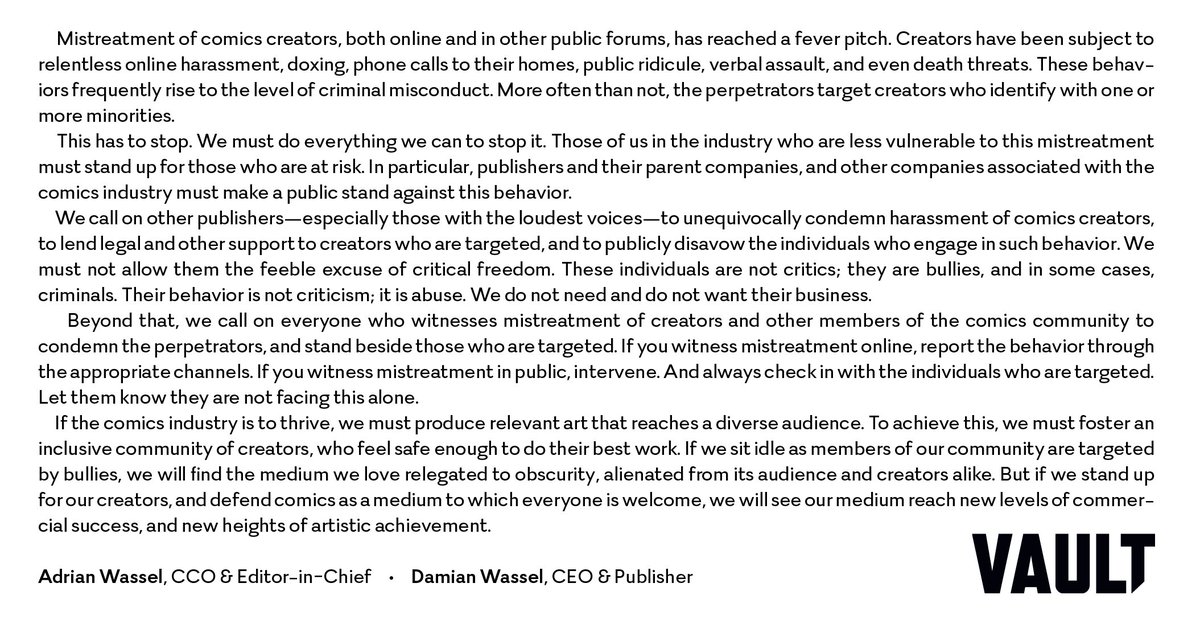 SyFy had the following to say:

Public reaction to the [Vault Comics] statement was as mixed as you might expect. Many of Vault’s fans, fans of comics in general, professionals and retailers applauded the statement of support, sharing thanks or their own words of solidarity with the publisher. Others offered skepticism that there was any harassment in the first place or demanded to see proof before accepting that there was a problem.

Speaking with SYFY Fangrrls in February 2018, four months after this statement was released, Vault Comics’ CEO Damian Wassel called the statement an act of solidarity with creators, saying, “I recognize that to a lot of readers, that’s a four-letter word that ought to be anathema to a businessperson. But Vault publishes creator-owned comics. We share in the success of our creators, and it’s only fair that we share their burdens too. We hope that everyone who works with Vault knows that we’ll support them to the ends of our resources. At the time we released the statement, we wanted to make sure everyone else knew our creators had someone standing beside them.” Wassel was quick to add that the statement did not represent “an opening salvo against comics fans,” who he called “an extraordinary audience; they are loyal, engaged, supportive, and deeply committed to the medium we all love.”

When asked if the environment has changed since September, Wassel stated, “Those who confuse harassment for criticism tend also to mistakenly assume that their right to speak freely entails a corresponding duty on everyone else’s part to listen. The truth is, no one owes them even the briefest second of attention. If the environment has changed, it has been in the following respect: the so-called trolls still rattle their sabers and growl from the periphery, but the rest of us grow steadily better at tuning them out.”

The character assassin known only as LateNightComics continued in his campaign. It was actual harassment, not criticism of Richard Meyer who was putting out his first indie comic book at the time “Iron Sights” and was one of the leading voices in the Comicsgate movement.

In a 2016 interview with CBR, the founders had the following to say about being a “creator owned brand”:

CBR: It’s also notable that you’re coming out and saying “creator-owned”” — a lot of companies sort of play with that terminology, but can’t quite promise what it means (instead using terms like “creator-driven” or some such). What can you share about the nature of the creator-owned dealt at Vault, and how important that is to the identity of the company?

Damian A. Wassel: We’re built from the ground up as a creator owned brand. It is essential to who we are. Our basic deal is this: we pay production costs, we split revenue fairly, and creators remain in creative control of their books. Of course we provide creative input and editorial support. But — at every level — we’re committed to giving creators the freedom they need and the respect they deserve. I think if you ask any creators we work with they’ll say the same.

CBR: What was your approach in getting the initial group of creators involved in the company? Some may be familiar to comics fans, but many won’t be. What were you looking for in this talent?

Adrian F. Wassel: Indie comics is a community. Sure, there are neighbors who play music really loud, really late, and neighbors who don’t want you on their lawn, and neighbors who hand out toothbrushes at Halloween, but there are also a lot of welcoming neighbors, who will go out of their way to help you because they know you’ll do the same for them.

Those are inspiring words and definitely a noble idea, but just because you make eloquent speeches and give inspirational interviews about how you’re a defender of independent comic creators and stand in solidarity with creators, all of the creators we know like to get paid. As our inspiration reported a couple of months ago, several Vault Comics creators were complaining of either “very delayed payments or complete lack of payments”. Damian Wassel, CEO of Vault Comics offered the following response:

In our second year of publishing, Vault fell behind on creator payments. For that we are forever sorry. We learned from our mistakes. We’ve improved our payment systems and payment communications, with the goal of issuing payments in full and on time. Meanwhile, we’ve worked to rectify all outstanding billing issues. While we’ve lost the support of some, we’ve also gained even stronger support from those who stood by us as we fought our way back. Back to paying creators on time. Back to seeing our series release regularly. Back to what brought us here in the first place: To do better by everyone in the industry, from creator, to retailer, to reader.

Rather hypocritical to claim to be in solidarity with your creators when you aren’t even paying them for their work! The question remains: is Vault current with their content creators or not? Attempting to parse those words would appear to be an exercise in futility. Would love to hear from those unsatisfied creators whether or not payments had finally been caught up.

Are they still paying the same page rates as they were in 2017?

Could Vault’s outspoken stance against customers who agree or align with the ComicsGate customer revolt have anything to do with their struggling finances?