Updated: George Lucas is Founding Member of “The Fandom Menace”

The Disney acquisition of Star Wars complicated things in the world of fandom and from it arose the pro-Disney fans and the anti-Disney fans (aka The Fandom Menace).

Bob released his book “The Ride of a Lifetime: LESSONS LEARNED FROM 15 YEARS AS CEO OF THE WALT DISNEY COMPANY” today and within it he openly discusses the difficult process of securing the massive acquisition deals of Pixar, Marvel, and of course Lucasfilm. He does not hold back at all and is very open about conflicts like Feige v Perlmutter, firing his ex-Film Studio Chief, the inner-workings of each deal and the relevant part for this sub, George Lucas’ involvement in the Force Awakens. It’s a very thorough look tbh and I do recommend people purchase it (ebook is $15) if they want all the details, especially about how Iger and Lucas formulated the sale.

On George sending his outlines for the Sequel Trilogy:

At some point in the process, George told me that he had completed outlines for three new movies. He agreed to send us three copies of the outlines: one for me; one for Alan Braverman; and one for Alan Horn, who’d just been hired to run our studio. Alan Horn and I read George’s outlines and decided we needed to buy them, though we made clear in the purchase agreement that we would not be contractually obligated to adhere to the plot lines he’d laid out.

He knew that I was going to stand firm on the question of creative control, but it wasn’t an easy thing for him to accept. And so he reluctantly agreed to be available to consult with us at our request. I promised that we would be open to his ideas (this was not a hard promise to make; of course we would be open to George Lucas’s ideas), but like the outlines, we would be under no obligation.

On revealing to George they weren’t following his plot outlines:

Early on, Kathy brought J.J. and Michael Arndt up to Northern California to meet with George at his ranch and talk about their ideas for the film. George immediately got upset as they began to describe the plot and it dawned on him that we weren’t using one of the stories he submitted during the negotiations.

On George seeing the Force Awakens for the first time:

Just prior to the global release, Kathy screened The Force Awakens for George. He didn’t hide his disappointment. “There’s nothing new,” he said. In each of the films in the original trilogy, it was important to him to present new worlds, new stories, new characters, and new technologies. In this one, he said, “There weren’t enough visual or technical leaps forward.” He wasn’t wrong, but he also wasn’t appreciating the pressure we were under to give ardent fans a film that felt quintessentially Star Wars. We’d intentionally created a world that was visually and tonally connected to the earlier films, to not stray too far from what people loved and expected, and George was criticizing us for the very thing we were trying to do. Looking back with the perspective of several years and a few more Star Wars films, I believe J.J. achieved the near-impossible, creating a perfect bridge between what had been and what was to come.

Suddenly, the “white slavers” comment becomes crystal clear.  SJWs will argue that George said The Last Jedi was “beautifully made.”  He did.  In an Eddie Hascal sort of way.

If you read my own review on The Force Awakens, you’ll see I had much the same reaction.  Nothing new.  Cannibalistic art design.  Boring stuff.

Many had that opinion and were slayed by the legacy media for it.

So how long before can we expect the legacy media to start calling George racist, sexist and/or misogynist?

Thanks to regular commenters Alexrd, That Junkman, Mike Sidious, Club Star Wars, and Lollifroll for the tip. 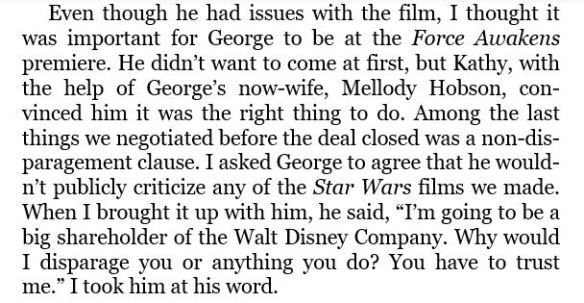 The sentence, “I took him at his word,” makes me wonder if Iger has some resentment towards George for his “white slavers” comments.

Thanks to Carlos Cuevas and egoshoppe for the tip. 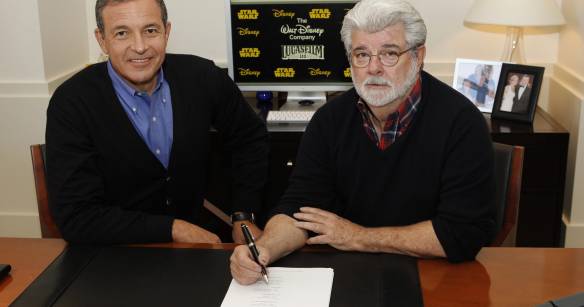 Thanks to Jar Jar Abrams for the tip.

Tom Berge: “George Was Not A Fan Of The Sequels”

Tom Berges from IGrewUpStarWars.com tells a story about a lunch he had with George Lucas at Skywalker Ranch.

After describing the nature of the lunch with George at Skywalker ranch, Tom states the following at the 1:25:00 mark:

“George was not a fan of what they did with the Sequels.”

“George, it turns out, wasn’t too keen on what they did with the sequel at this point.”

“That’s all I can tell you, cause that’s all we heard.”

“He said he didn’t like what they did with the characters.  That came straight from George Lucas’ mouth.”

So, Is Mollie Damon Accusing George Lucas Of Belonging To A Hate Group? 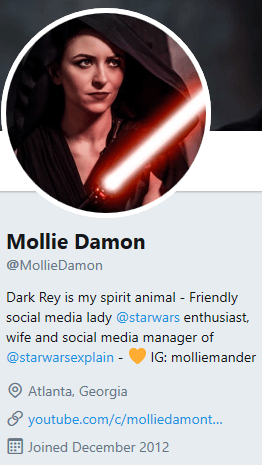 Recently, Mollie decided to publicly classify the Fandom Menace as a hate group. 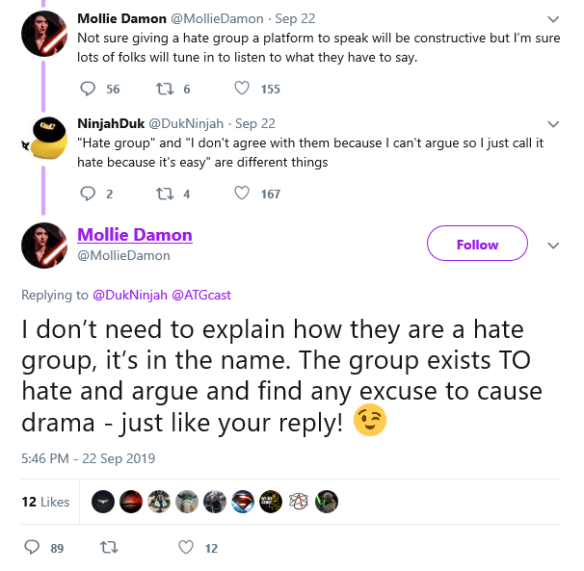 Yes.  No need to explain her uneducated assertions.  Things are however Mollie feels they are at any given moment.  How very constructive indeed.  Because the Fandom Menace is literally out there burning crosses and throwing Jews into ovens.  Or something equally stupid in Mollie’s progressive pea-brain.

But Mollie may have a problem now that Iger has outed George Lucas himself as a member of the prestigious Fandom Menace.  A story corroborated by Tom Berge.

Is Mollie saying that George Lucas belongs to a hate group?  Because that would seem to be the inference here.  It wouldn’t be the first time Lucas was inappropriately called out for “hate” by the legacy media.

Others are commenting too and a big shout-out to @Dataracer117 for digging up a lot of this too: