So leftist Polygon’s written about at least 10 Justice League stories they think are the best. There are some here that are worth reading – certainly the ones up till the end of the 80s – but there are predictably some others coming around the turn of the century decidedly simply not worth the effort. First, there’s the sugarcoated view of JLA’s Rock of Ages:

After more than a decade, the biggest guns in the DCU reunited as the Justice League in Grant Morrison and Howard Porter’s 1997 relaunch of the property as JLA. (It was the late ‘90s, acronyms were big back then.) Morrison and Porter took a back-to-basics approach in more than just the line-up, creating stories that were, in many respects, amped up versions of the weird sci-fi that original writer Gardner Fox had offered, and focusing on plot and spectacle while eschewing soap opera in a way that mainstream superhero comics hadn’t managed in more than a decade.

I’m afraid it wasn’t as back to basics as they make it sound, when you consider Hal Jordan was kicked to the curb in the worst ways possible a few years before, replacing him with Kyle Rayner. As I’ve said before, I realize a fictional character can’t be faulted, but the way said character made an ascension was throughly invalidated by the horrifically poor execution of the scripting in Emerald Twilight and the several Green Lantern issues that followed. The forced shock value death of Alexandra deWitt was by far what sunk it. And Morrison went along with this unquestioned when he cast JLA. How can you consider it great when a pall hangs over proceedings? 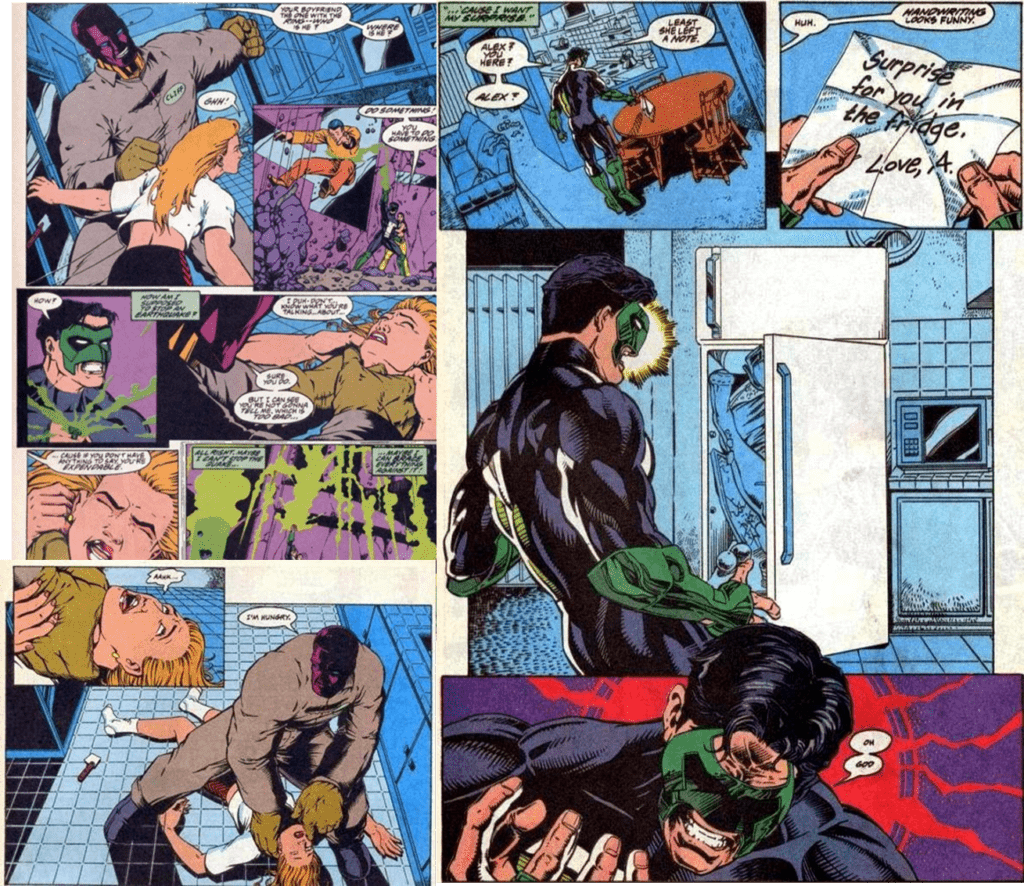 It’s just not so easy to get past it when you realize how Rayner was brought about, and the editors make no attempt to do a genuine fix of past mistakes. It’s fine to pass on the baton. It’s not fine to do it in poor taste. That’s why Wally West originally taking up Barry Allen’s Flash mantle worked well, while Rayner taking Jordan’s didn’t. Many of the problems plaguing Rayner continued for years afterwards, including the ludicrous reliance on the fridging of Alexandra by Major Force in Kyle’s origin, and no matter who was writing Rayner at the time, he lacked the very personality Hal’s detractors hypocritically complained didn’t exist, while simultaneously, it seemed like Kyle was written making very awkward remarks in conversations with other heroes and cast members, suggesting the assigned writers didn’t find it appealing to use him either. 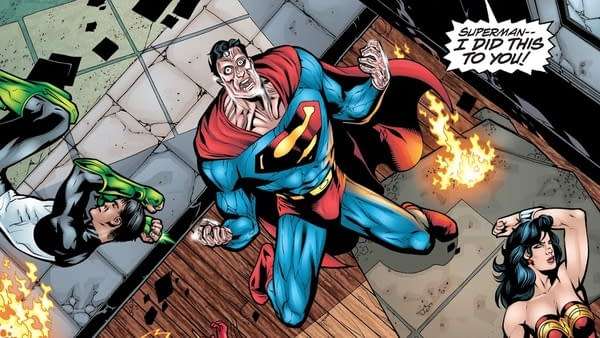 Next, I do honestly find Mark Waid’s Tower of Babel troubling:

Morrison’s run as writer on JLA was followed by a brief stint by Mark Waid, years before his award-winning Daredevil run. He came in hard with a storyline that starts with Bruce Wayne’s parents being dug up, and goes from there as Batman is revealed to have made plans to take down each and every one of his teammates should they ever go bad. It’s a good idea, complicated by the fact that someone has since stolen those plans and intends to use them for — Shock! Horror! — nefarious ends.

If Morrison had turned up the appeal of the very first Justice League stories, “Rock of Ages” made it clear that Waid was doing the same thing to the second generation of League, where the secret identities and interpersonal relationships of the team fed into the dangers they faced, making everything more personal while still almost impossibly dramatic — in other words, making the most of the soap opera that had been absent for the past few years. But then, what could be more dramatic than being betrayed by your best friend?!?

And what could be worse than this plot becoming the basis for Infinite Crisis at least 5 years later, if memory serves? Not to mention that in retrospect, the idea of Thomas and Martha Wayne’s bodies being dug up sounds distasteful, aside from being a precursor to a later Daredevil story by Waid where Matt Murdock’s father had his remains dug up and dumped on Matt’s desk in the office. In any event, I’ve been feeling the JLA title of the time hasn’t aged well, again, due to the forced casting of Rayner as Green Lantern, while an editorial mandate kept Jordan entirely on the outskirts after 1994’s horrendous Emerald Twilight, the lead-in to Zero Hour, and the tale demonstrating how a fictional character was being punished for the mistakes of the writers. Make no mistake, I think Waid’s Flash run was good, but this kind of scripting is decidedly tasteless. At least he reversed Alanna Strange’s fate during his run, jettisoning what was set up in 1990’s Adam Strange: Man of Two Worlds, and restoring the earthman’s humanoid wife to the living. 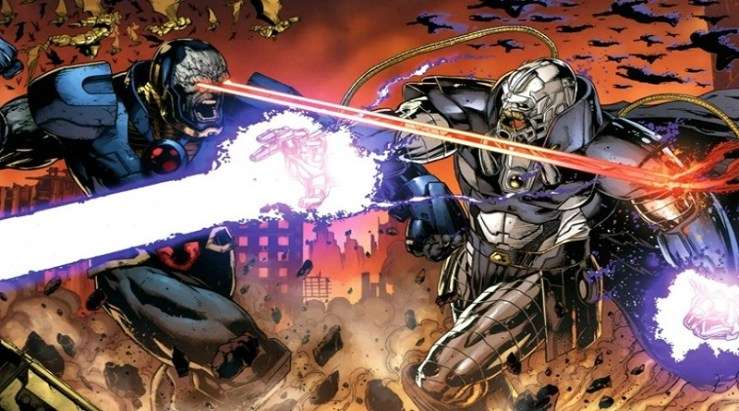 Another pretentious example given is the Darkseid War from 6 years ago, by none other than Geoff Johns, and there’s one more writer cited here who makes it worse:

It took almost five years, but the New 52’s recreated version of the Justice League peaked, as elements from multiple earlier storylines collided — along with teases of alternate and earlier versions of continuity — and Geoff Johns tried to go out with a bang. Crisis on Infinite Earths villain the Anti-Monitor returned to fight with Darkseid, while the Crime Syndicate from Earth-3 got stuck in the middle alongside the Justice League, and there’s also the creation of a new Green Lantern at some point, as well.

In the middle of all of this, the primary story by Johns and Fabok takes a break as multiple creators — including Steve Orlando, Rob Williams, and the Strange Adventures team of Tom King and Evan Shaner — tell stories of what happens when the Justice League gain the powers of Jack Kirby’s New Gods, because that happens, as well. For anyone looking to find a story that sums up the appeal of New 52 era, or simply wants to see what happens when Geoff Johns gets to tell the biggest story he can manage (with a little help), here it is.

I’ve long considered Johns a bad lot, having reevaluated whatever he’d written that I’d read in the early stages of his career. And his take on the League a decade ago, around the time Dan DiDio forced the New52 upon the DCU, not only limited its casting to the leading 7 superheroes, possibly excepting Martian Manhunter, it also featured a horrible backup tale with Billy Batson, put through the cliched obsession with making everything darker, which does nothing more than insult the intellect of adults as much as children. But no less insulting here is Polygon’s lionization of King, still one of the worst writers to remain on DC’s payroll. I consider much of Johns’ writings a whimper in hindsight, so to see them say he can manage a “big” story merely makes me shake my head.

Let’s be clear. I am a fan of the Justice League of America, and also the Justice Society of America. But I’ve long felt that after the early 90s, much of what made these team titles work in the past, whatever the tone, collapsed due to political correctness befalling the franchises (Gerard Jones was easily the first writer who really dragged things downhill), along with writers whose styles and approaches do not appeal to me. I feel sad saying this, but due to the disintegration of continuity and good taste in how things are handled, that’s why I don’t find these takes on the titles appealing.