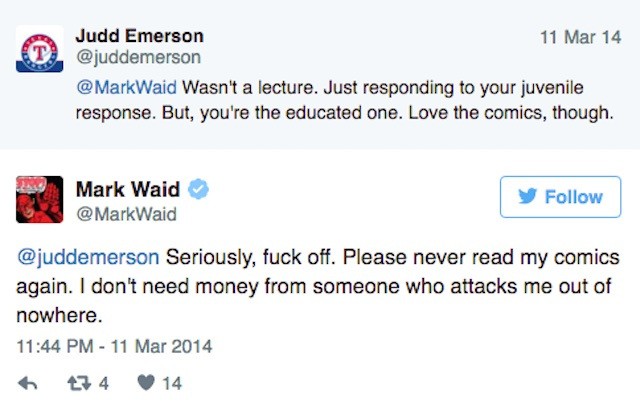 Some more dismaying information has come up about how comic writer Mark Waid has handled business with other people in the medium in the past. First though, the lawyer Waid allegedly hired to represent him in the lawsuit filed by graphic novelist Richard Meyer, has posted what looks like fan-baiting, following the arrest of mail-bomb suspect Cesar Sayoc, who was charged with sending packages to Democrat critics of President Trump:

So this guy, 56 years old, lived with his mom, was in debt, alt-right Trump fanatic, I’m thinking he shares characteristics of many members of #ComicsGate.

Btw, I charged @MarkWaid $1,250.00 for this tweet so please donate to the legal defense fund at https://t.co/byzUNkD9Nn 😏 https://t.co/DyIFUXgOfs

It should be noted that, whatever this Sayoc’s political leanings, he held the following twisted beliefs:

Sayoc at times posted many graphic images of gory violence — some from jihadist propaganda. Yet he was strongly opposed to Islamic terrorism. At the same time, he was a 9/11 conspiracy theorist who appeared to ascribe blame to George W. Bush, Dick Cheney, and “Zionist forces” for the “inside job.”

That doesn’t sound all that far removed from what the left tolerates, or even Ron Paul. On which note, it may not have been discussed yet, but what if this creature is a Paul-bot? He caused so much trouble for the Republicans when he was more active, did whatever he could to give conservatism a bad name under the guise of “libertarianism”, and his cultists, sadly, will continue their presence for a long time after, leeching onto more sensible people at every opportunity. All that aside, Zaid’s analogy is offensive and takes away the seriousness from the issue. He continued with the following:

These #ComicsGate ppl are so pathetic. They live for conspiracies. This guy, & I have no clue who he is, thinks I or @MarkWaid “false flagged” his YouTube video. 😂 As if we could care less. Heck, that’s why I don’t even mind giving him some attn here. ❤️https://t.co/ftVXsX2HH6

After reading some of his statements, I have to ask just what kind of lawyer this Zaid is supposed to be, spending all that time on social media ragging on what he dislikes. How does Zaid think he’ll make a persuasive case if he acts this contemptible, and drags in issues that should be left at the door while the case he’s representing is ongoing?

Anyway, that’s not the only concerning issue that’s come up. Setting his general rudeness towards customers aside, a former business partner of Waid’s has just spoken out against him on Facebook, accusing him of cheating them in a business venture: 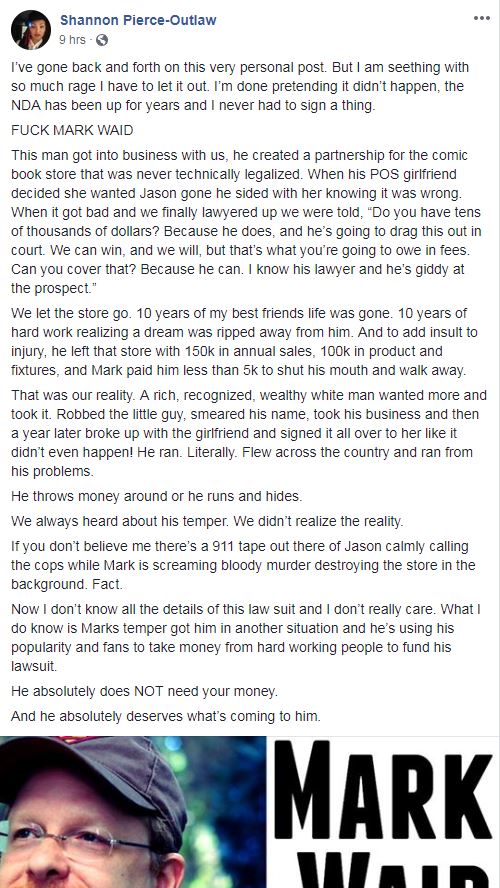 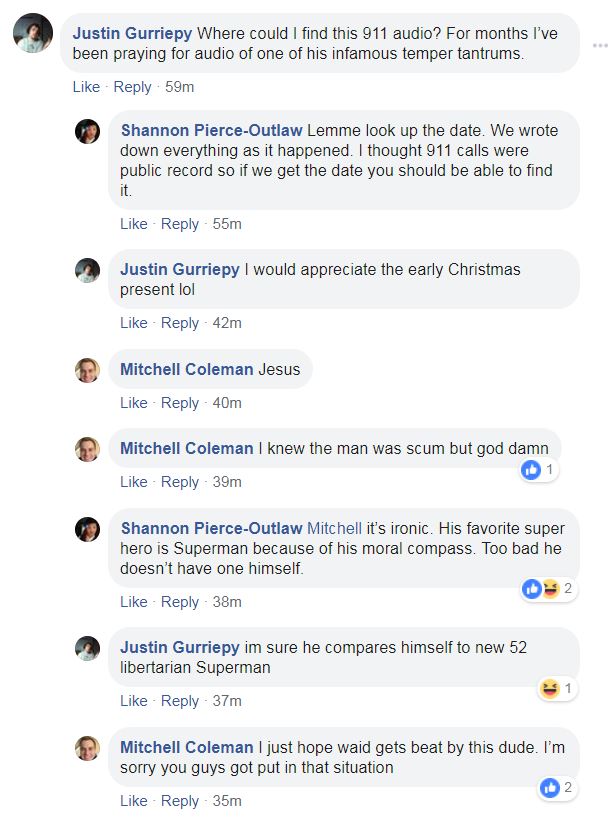 A Scotswoman’s also recently made serious allegations against him, this tale also includes Dan Slott and Stephen Wacker. This case is becoming all the more disturbing. I don’t know if Mr. Waid was always this way, but if he’s sunk that low, it’s feeling as though he’s tainted even the better stuff he’d once scripted over 2 decades ago. No matter the outcome of this impending trial, chances at this point are that he won’t be a moneymaker for any company he works at, not even the Humanoids publisher owned in Europe, who made the potential mistake of hiring him last month as their “creative director”. 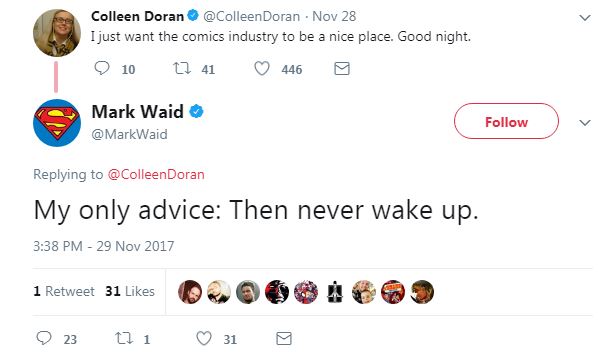 It’s become pretty apparent for several years Waid is the kind of writer who has disowned his past works, especially after he wrote Irredeemable in the mid-2000s, which could be seen as a rejection of the superhero genre. I’d strongly recommend he take some time away from the industry if he wants to make amends, go on a vacation and tour the countryside.

Anyway, for anybody who wants to fund Meyer’s own legal fees in case Waid loses and chooses to appeal, here’s a page launched for him by Ethan Van Sciver. The fundraiser has astonishingly nearly amassed an impressive $60,000 in 24 hours. This level of support is coming far faster than Mark Waid’s Gofundme page, in fact as of this writing, Meyer’s fundraiser has raised more money than Waid’s in less time.  Impressive for bunchof  ‘russian bots’.

Bottom line, is that it’s got to be made clear that the kind of behavior Mr. Waid has demonstrated, this ‘tortuous interference’ and ‘defamation’ is simply unacceptable conduct and is tantamount to gate-keeping.

Two corrections have been made to this article where Avi stated that Nick Rikieta had been advising Richard Meyer. That information was incorrect. The spelling was also incorrect. It should have been “Nick Rekieta”.

Creator of Scotland's First Black Superhero May Have Missed Classic Comics
Van Sciver Expands His Cyberfrog Empire with Action Figure Line
Grant Morrison Pens Bizarre Novel About a Conspiracy of Drag Queens
At the Memphis Comics Expo "Creators Come First!"
Is it Too Late for a Scarlet Witch Solo Marvel Comic Series?
Comics Writer Jim Zub Just Made a Fool of Himself... Again
How Political Comics with "Important Messages" Have Become a Joke