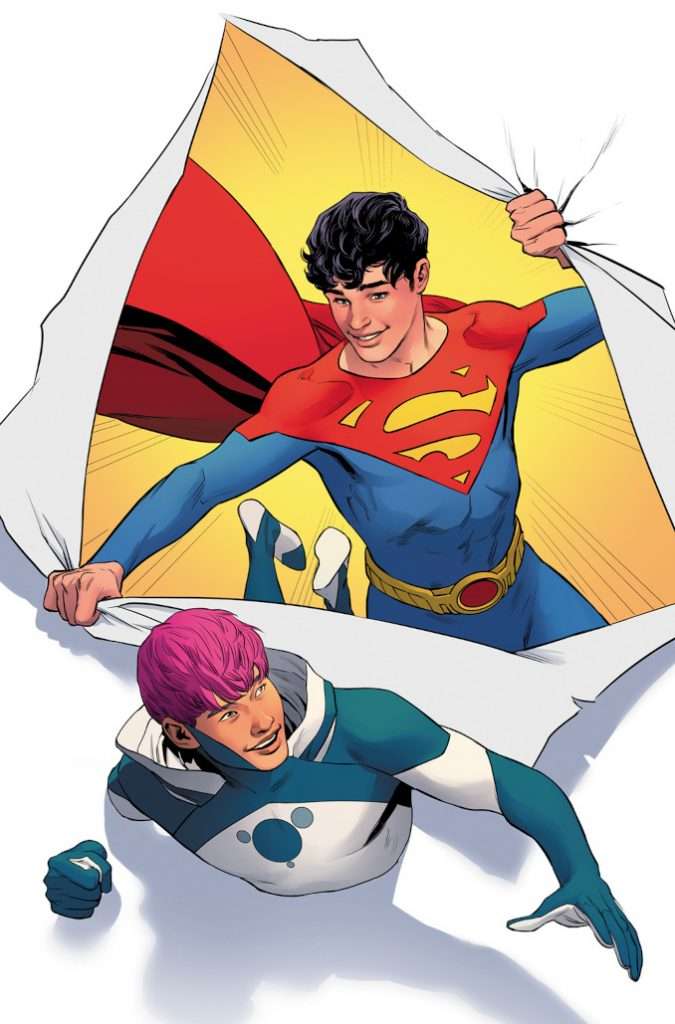 Steve Bennett, a columnist for ICV2 (a site I’ve largely lost interest in after they stopped making sales charts accessible) is celebrating Tom Taylor’s oh-so big a deal Son of Kal-El spinoff from Superman, all because of the LGBT themes it’s built on, and boy, but this guy sure does love serving as apologist, and making Christians out to look stupid by extension because they disapprove of this direction:

Currently, one of my favorite comics is Superman: Son of Kal-El because of the excellent scripts and art, but also because it consistently takes standard stories in unexpected directions. I’ve been a lifelong fan of classic Superman and am totally on board with Tom Taylor’s relatable post-modern incarnation of the character. As far as I’m concerned, the only thing missing that would make him completely contemporary is to put him in therapy. And as writer Amer Sawan pointed out in a recent piece, having spent the ages of 11 to 16 trapped in a live volcano where he was tormented by Earth-3’s merciless Ultraman, a doppelganger of his father, he has plenty of barely repressed trauma to unpack.

It may be bad to have a trauma from being stuck in a volcano, but why does he believe nothing’s wrong with depicting LGBT practice as though it were perfectly average and normal? Or, why is does he believe moonbat Taylor’s direction is entirely relatable? Somehow, I have difficulty believing Mr. Bennett is really a Super-fan when he gushes this much over an ultra-leftist path past generations of writers never sunk to. He then proceeds to belittle concerned Christians:

It’s actually been a while since I read online about anyone being opposed to this status quo, that is until I came across a story on CBN about someone who supposedly got “canceled” for her comments on the character’s sexuality (see “Another DC Character Comes Out as LGBTQ“). The story concerned Sophia Nelson, who was a scholar-in-residence at Christopher Newport University and received “destructive attacks” when she wrote in a tweet that she didn’t understand why it’s “necessary” to “focus on the comic book character’s sexual orientation.” The piece quotes her as saying, “What if Christian parents of children reading comic books don’t want their kids exposed to bisexual characters. This is being pushed on kids. Then parents have to explain it. Most cannot!”

Superman: Son of Kal-El is rated Ages 13+ and it says so, right on the cover. In fact, almost all DC titles that aren’t Black Label (which are intended for readers 17+) are rated for Ages 13+. I double-checked to make sure and found that even Looney Tunes was (for some reason) rated for Ages 13+. I’m a regular reader of the title and can’t remember seeing any content that would justify that rating. The closest I came to a DC All-Ages comic was Scooby-Doo which is rated for Ages 8+.

So, while it’s theoretically possible a number of under-13s are reading Superman: Son of Kal-El, I don’t think it’s very likely, so imaginary problem solved. Now I just wish DC would publish some more comics actually intended for kids.

Hmm, we seem to have here an apologist who believes all parents, including those already invested in indoctrinating their children with drag shows, couldn’t possibly see a tale like this as a perfect way to perpetuate the problem. Nor does he seem concerned about the schools in leftist districts around the USA who’re indoctrinating children to believe all this garbage and junk science. So, how peculiar Mr. Bennett doesn’t admit it’s disturbing when schools practically override the parents aided by far-left ideologues. He might want to consider the following news from Post-Millenial about a drag show at a gay bar in Dallas, Texas, where:

In another shocking video, parents hand their children money and tell them to give the money to drag performers.

There was a similar case in Seattle, Washington, involving a museum pushing the same approach. So, does Mr. Bennett think it impossible for insane parents to buy stuff like Son of Kal-El for the children they’re already taking to gay drag queen bars, and use it as a tool to further the indoctrination? If they could take their kids to such monstrosities today, it’s not impossible for them to buy these comics tomorrow, based on the same form of thinking. What a disgrace Mr. Bennett is, gushing over the desecration of my Jewish brethren Jerry Siegel & Joe Shuster’s classic creation, all for the sake of upholding his precious ideology at children’s expense. The Ages 13+ rating is meaningless if you have corrupt parents willing to turn their kids’ heads inside out for the sake of this ideological brainwashing. By the way, what if the Looney Tunes comics currently in publication have similar propaganda? If it’s possible for the Arthur cartoon to employ such propaganda, along with Disney’s newest productions, it’s not impossible for comic adaptations to follow suit, especially if the chief editor is already morally bankrupt. Plus, even if the content in Son of Kal-El doesn’t feature graphic sex scenes, that still doesn’t mean it’s okay to just depict 2 men kissing in a context presented as perfectly “normal”.

Mr. Bennett should be ashamed of himself for acting as apologist for all this obsessive LGBT propaganda that could be exploited by corrupt parents along with educators for the sake of indoctrination. Apparently, this is what he means by “theoretical”. As far as I know, he’s the owner of a specialty store in Ohio, and I’d rather not buy at his establishment if this is what he’s going to promote, all the while insulting Judeo-Christian adherents concerned for the well being of any age bracket. Also notice how people like him never seem interested in campaigning for more characters with Armenian background to be created in the mainstream, let alone independent publications, which puts the lie to the whole notion they believe in “inclusivity”. Yet it should be no shock ICV2 would print this kind of stuff, seeing as they also smeared the Comicsgate campaign in past years. They’re just another mainstream news site that’s become largely irrelevant to pop culture due to their political leftist lecturing.