This Explains Why I No Longer Own Any Star Wars Comics

In this AMC interview by James Cameron with veteran Star Wars creator George Lucas, he reveals something very unpleasant about how and what he modeled the Jedi and Rebels upon: the Vietcong. This comes around 1:13 into the tape, and notice how, when terrorists and Mujahideen are mentioned, Lucas doesn’t try to refute the notion Jedi fighters could be metaphors for such monsters. Also note how, as these twosome drone on, Lucas seems comfy with the notion the USA would lose in the war against commies in Vietnam.

Needless to say, this was very dismaying to think about, when you realize the phenomenon of the late 70s-early 80s sci-fi fad – one of the most significant movies to give the whole genre a boost in modern times – was built on some of the grimiest templates and metaphors like commies, while the empire headed by Palpatine could be an allusion to the USA, which makes the Nazi allegories with pith helmets even worse.

I remember when the novelist David Brin argued over 2 decades ago on Salon, of all places, that the Star Wars universe is built on elitist and anti-democratic ideas.

And surely more stupefying would be the metaphor for Darth Vader by the end of the original trilogy:

…let me again acknowledge that “Star Wars” harks to an old and very, very deeply human archetype. Those who listened to Homer recite the “Iliad” by a campfire knew great drama. Achilles could slay a thousand with the sweep of a hand — as Darth Vader murders billions with the press of a button — but none of those casualties matters next to the personal saga of a great one. The slaughtered victims are mere minions. Extras, without families or hopes to worry about shattering. Spear-carriers. Only the demigod’s personal drama is important.

Thus few protest the apotheosis of Darth Vader — nee Anakin Skywalker — in “Return of the Jedi.”

To put it in perspective, let’s imagine that the United States and its allies managed to capture Adolf Hitler at the end of the Second World War, putting him on trial for war crimes. The prosecution spends months listing all the horrors done at his behest. Then it is the turn of Hitler’s defense attorney, who rises and utters just one sentence:

“But, your honors … Adolf did save the life of his own son!”

Gasp! The prosecutors blanch in chagrin. “We didn’t know that! Of course all charges should be dismissed at once!”

The allies then throw a big parade for Hitler, down the avenues of Nuremberg.

It may sound silly, but that’s exactly the lesson taught by “Return of the Jedi,” wherein Darth Vader is forgiven all his sins, because he saved the life of his own son.

This type of metaphor (who knows if such a news site would be willing to publish it today, seeing how far left they’re going?), when I thought about it in years after reading it, was alarming. A villain annihilates millions, and we’re supposed to be forgiving by the end just because he saved his son from an assault by Palpatine? Good grief. What’s the world coming to? This is precisely why, much like I’ve found villain worship stemming from comicdom galling, I also find any worship of Darth Vader equally troubling. But few villains in comicdom have ever been portrayed as instantly worthy of forgiveness as Darth looked like he’d been by the time Return of the Jedi was done. The Death Star was the population-slaughtering weapon, used to terminate planets housing tons of innocent people, yet at the conclusion, that doesn’t matter because of one mere life? That’s not outweighed by the previous crimes?

What an embarrassment. It reminds me that there’s a similar problem with how the original Space Battleship Yamato series of 1974-83 goes along in its depiction of Desslar: he was in charge of an alien empire that attacked the earth in much the same way Nazi Germany fired rockets at Britain, his machinations led to the deaths of untold millions, and though he does perish by the end of the first series, when he’s resurrected in the second, suddenly – and certainly by the third – he’s now being depicted as on good terms with the earthlings, having rebuilt his alien empire again. Desslar may have spent time in the afterlife, but does that excuse his own past crimes in that anime series? Hardly. That’s why Leiji Matsumoto’s tale was dumbfounding in retrospect. 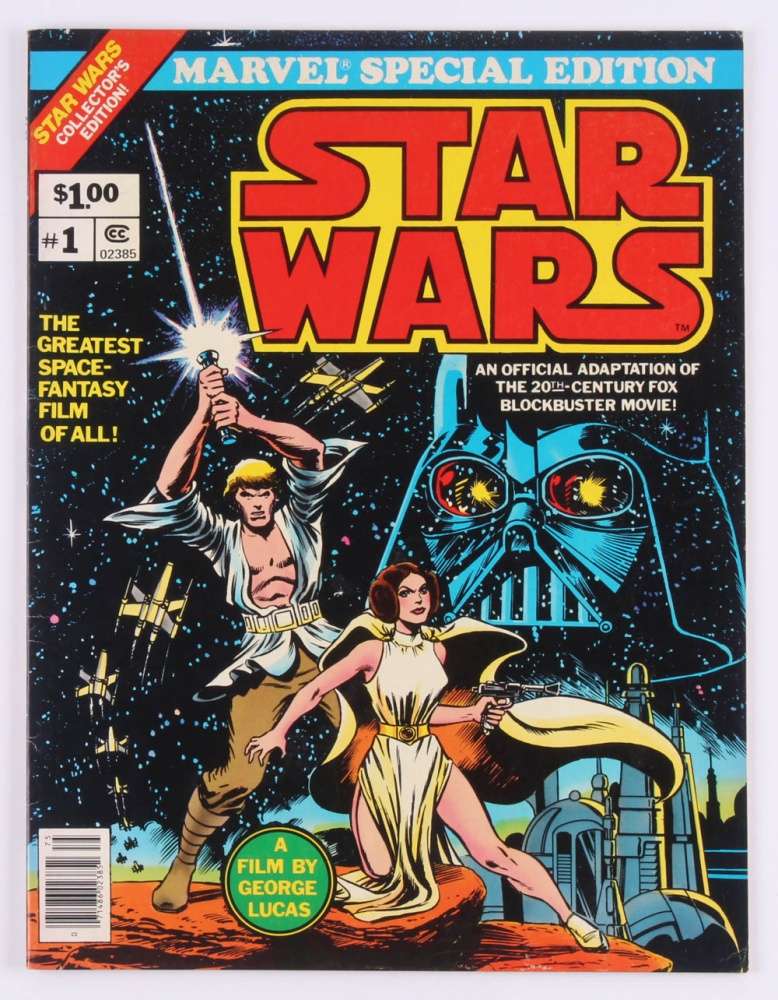 And all this is why, when I realized the disturbing metaphors SW was built on years after it was such a big thing, I honestly began to find it all discouraging, and it makes me decide it’s good I don’t own any comics based on it today. I say that because I used to own a few years before, and certainly read some of Marvel’s original adaptations from 1977-86. I no longer own any, and rarely bothered to read any since, and the way some of the more recent ones, including from the time Dark Horse had a license, are illustrated in a photo-realist format does nothing to improve my modern perception of them. Nor does it improve my overall perception of Lucas, when I see how he normalizes his choice of metaphors.

That’s not saying I’m happy with how the franchise has turned out under Kathleen Kennedy. Nor am I happy Gina Carano had to lose her Hollywood gigs on spinoffs like The Mandalorian because her politics stand in contrast to Lucas and company’s. But it’s still a decided shame a sci-fi franchise like this had to be built on something so tasteless. I know some people will say SW was what really pushed the genre forward over the years, with Steven Spielberg contributing just as much with his company contributors. And I won’t say they’re mistaken about SW’s influence. Yet it’s still no excuse for the politics Lucas drew from. It may be one thing if he based Palpatine on Richard Nixon, as I vaguely recall reading in a history book by Dale Pollak. But basing the Jedi on anti-democratic forces in Vietnam is going way too far, ditto the Vader metaphor of a mass-murderous villain being worthy of forgiveness. When you look at the templates Lucas used, and realize something so stupefying was the driving force behind it, it all just looks dismaying and depressing.