The Stunning Racism of Marvel Replacing Iron Fist for “Diversity” In this sugary article recorded from Gizmodo, they’re making a huge fuss over the Asian replacement for Danny Rand as Iron Fist:

Since Miles Morales debuted in the Ultimate Universe back in 2011 and slowly became a household name, Marvel’s had no shortage of new, younger characters take on the names of established legacy heroes like Iron Man and Thor. Each new hero has had attention grabbing headlines, and for many of them—like Sam Wilson’s Captain America or Jane Foster’s Thor—the diversity is very much The Point of their existence, implicitly or otherwise. And over time, fans of these newer characters have been rewarded, as many have or will soon grace the MCU with their presence in the coming years.

But have they actually had quality storytelling, to say nothing of a plausible introduction not written up for political purposes? In fact, how do we know these diversity-token characters have much of a following to begin with, let alone grand sales? Predictably, the writer of this awful puff piece remains ambiguous on all such issues, yet actually admits the “diversity” is the whole point of their being put in the roles they got.

The next hero to receive a modern update is Iron Fist, a character who could probably use it more than most. Once he was announced to be receiving his own Netflix series, many fans were hoping the character of Danny Rand would be played by an Asian actor, if only because the idea of a white boy being great at kung fu raises some eyebrows. While Finn Jones’ casting was certainly far from the only problem with Iron Fist, it didn’t exactly help the Netflix-Marvel enterprise, which would later become known for its inability to really do anything with its limited supply of Asian characters. Still, that Iron Fist’s second season ended with Jessica Henwick’s scene-stealing Colleen Wing becoming the new Fist indicated that the show was listening to its critics and wanted to embrace the idea of a legacy mantle. But the show was canceled before we could see that play out, and it doesn’t seem like Henwick’s due back for a return like Netflix co-stars Charlie Cox and Vincent D’Onofrio anytime soon. So in other words, these “fans” they speak of never liked the idea of a white guy as a martial artist to start with? Wow, some way to thank Roy Thomas and Gil Kane after all the hard work they did. Has it ever occurred to them their description applies perfectly to Batman/Bruce Wayne to boot? Or even Daredevil? And then, they proceed to talk about retcons like they were something that happened in real life:

Danny has been the Iron Fist of the primary Marvel Universe since Roy Thomas and Gil Kane first introduced him in 1974, but the mantle has a long in-universe legacy behind it, and more Fists have been revealed throughout the character’s near 50-year comics history. Most of those Fists have been his predecessors, including one who was part of the prehistoric Avengers. And his successors have been short term, like Pei—a teenage girl who was the co-lead of Comixology’s Immortal Iron Fists back in 2017—and very briefly Okoye, towards the end of the recent Heart of the Dragon miniseries. In it, Danny and Pei transferred their powers to her so she could save the world, after which she relinquished the power so the Iron Fist cycle could begin anew. 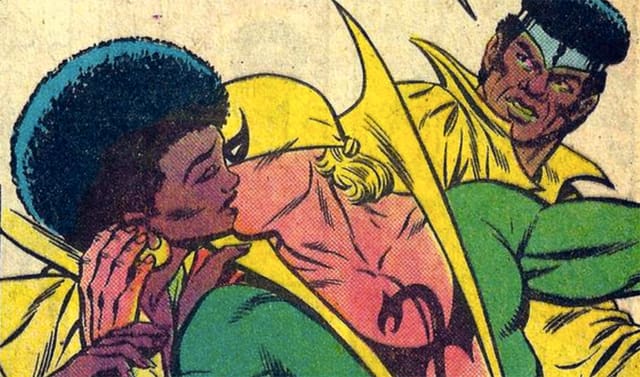 They must really enjoy being so smug in their assumption everybody will believe this was actually the case for decades, as though it happened in real life too. Those “prehistoric” Avengers were a recent creation. No wonder Gizmodo is one of the dumbest pseudo-pop culture sites around. And here’s their justification for this farce:

With the MCU now having managed to secure a big name Asian hero in the form of Simu Liu’s Shang-Chi, you can practically see how Iron Fist’s new solo comic—by writer Alyssa Wong, artists Michael Yg and Sean Chen, inker Victor Olazaba, and colorist Jay David Ramos—is trying to right the ship even further. Picking up the title of the Living Weapon is Shanghai teen Lin Lie, who breaks the mold of recent teen heroes like Miles, Robbie Reyes, and Kamala Khan by starting out as an original character before transitioning to a legacy hero. Introduced as the superhero Sword Master in 2019 as part of a collaboration between Marvel and NetEase, Lin Lie was previously relegated to event tie-ins, the Agents of Atlas series by Greg Pak, Nico Leon, and Gang Hyuk Lim; and a solo comic by Pak, Shuizhu, and artist Gunji.

Gee, if he really did begin as an original character, why not keep him that way? Why reduce Lie to a token replacement tactic for the sake of publicity stunts? Unlike Infinity Inc, which introduced Yolanda Montez as a successor to Wildcat/Ted Grant plausibly, this is hardly legacy inheritance of a role originally established with a white male protagonist, which would make it far more plausible. In addition to that, the whole project is so obviously laced with political motivations, it’s much harder to accept it as they’ve put it together. At worst, they’ve insulted Danny Rand co-creators Thomas and Kane, along with Bill Finger and Bob Kane as Batman’s co-creators, since, let’s remember, Bruce Wayne began as a white guy practicing martial arts, and Daredevil built on similar elements with Matt Murdock. How that doesn’t occur to Gizmodo’s writers is mystifying. And do they actually expect this woke take on Iron Fist to sell in millions? I’m sure they realize it’s a long way off, no thanks to all the apologia they’ve provided for the industry’s SJW establishment over past decades.

See Also: Anti-Semitism & Racism in Marvel Comics: A Bug or a Feature?