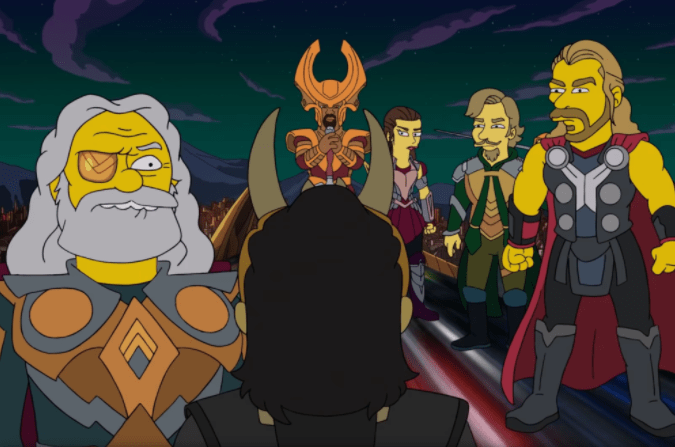 The Federalist pointed to a short so-called Marvel tribute from the Simpsons producers, made to promote the Loki TV show, and again, we have a case of unfunny business at hand:

“This is what happens when Disney buys Marvel and Fox,” read a painted sign held by Arnold Schwarzenegger parody Rainier Wolfcastle in the Disney Plus animated short “The Good, The Bart, and the Loki.”

If you couldn’t guess, the July 7 feature was a crossover event between Marvel Studios and The Simpsons, both subsidiary properties of the Disney Company. The six-minute animated feature was created to promote the new “Loki” series on the Disney Plus streaming service, and that’s exactly how it feels.

Like any other multimillion-dollar corporate ad, it is soulless and vapid.

Springfield, your savior has arrived. Start streaming the short, @TheSimpsons: The Good, the Bart, and the #Loki now on #DisneyPlus. pic.twitter.com/vLIHUXEq91

I’ve made the argument myself before, that corporatism and conglomeracy has long become a vapid, politically motivated machine, and this is just another example of how bad that’s become.

It might elicit a wry chuckle when the morbidly obese Comic Book Guy appears as the speedster Quick Silver when the Springfield Avengers come to give Loki his comeuppance, or maybe a groan of morbid humor when Homer asks Loki to turn Ned Flanders into a pork chop so he can subsequently cannibalize his pious neighbor. But that’s pretty much it.

I think making jokes about cannibalism is pretty gross too. Yet such crudeness really began to affect the Simpsons as far back as 20 years ago, and if they’re still employing the approach, it’s a shame.

In 2009, The Walt Disney Company purchased Marvel Entertainment for $4 billion. In 2019, they acquired 21st Century Fox for $71.3 billion. With these acquisitions, Disney became the owner of some of the most lucrative and beloved intellectual property across the globe.

Undeservedly, as has since become clear, and did they do it make the products more palatable? Nope. Under their management, Marvel became a much more soulless machine than before, as seen at the time Axel Alonso was EIC. Now, the Simpsons is being used to make things worse for the universe Stan Lee worked so hard to develop.