This particular Saturdays Soapbox Revisted I’m continuing with the HUMAN TORCH #3 but wanted to include this first to set the tone in a way, even though the insert is actually pulled from  – NIGHTSTALKERS # 3 NOBODY CROSSES BLADE JANUARY 1993. The themes throughout issue #3 of THE SAGA OF THE ORIGINAL HUMAN TORCH. 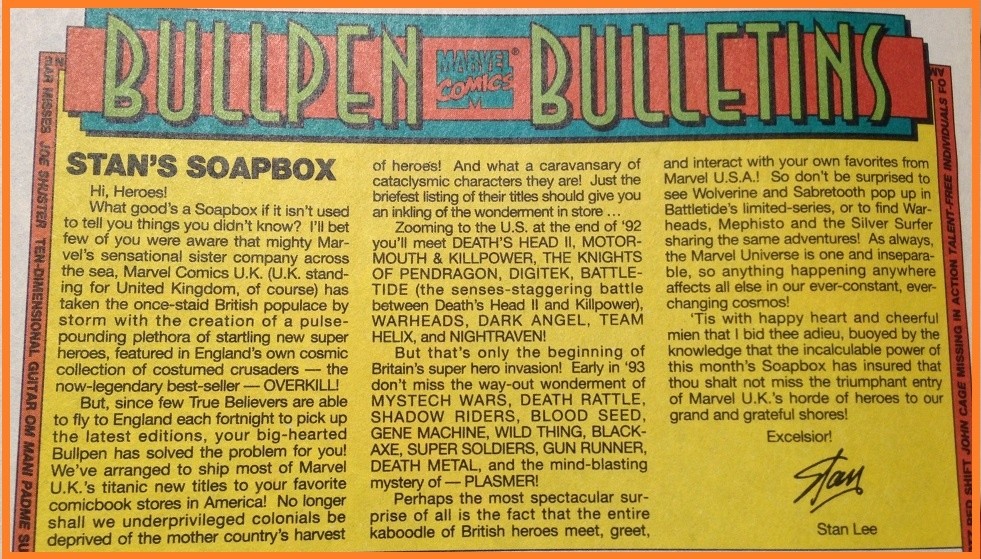 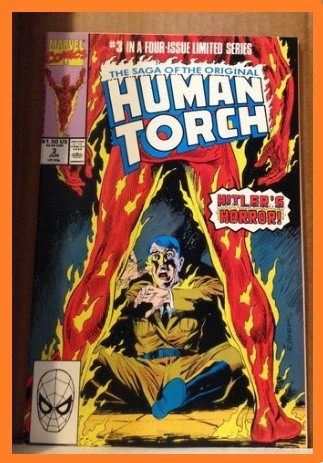 It seemed such a wonderfully and disappointing ironic  full circle type thing. Socially and politically it’s still very popular to scare the begeezuz out of Nazis’ and Hitler in particular – if you can.

The problem seems to be target acquisition or rather reality. 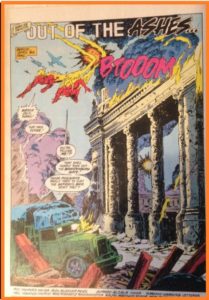 I’m just teasing the post modernists of course but it is kind of eerie to me that this series was very interesting and my favorite as a result of the history that the creators tried to cram into the thing.

It really is quite shameless and the liberality taken are quite striking.

I didn’t notice how over the top it was when I first read it so many years ago.

It goes so far as to show an assault on Hitlers bunker, the immolation of Hitler as the explanation for his corpse being found burned, famous European architecture such as the Brandenburg Gate completely destroyed and swept through with fire and rubble. 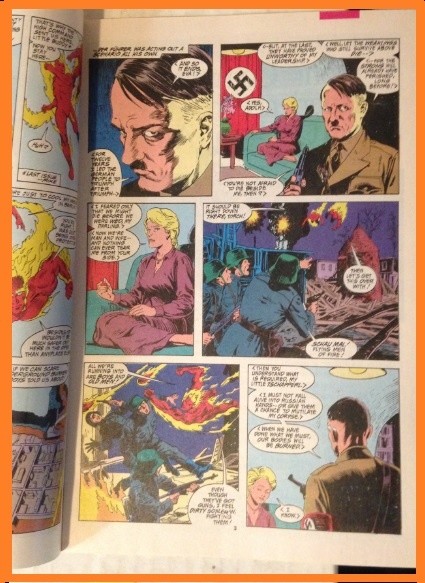 As you can see here in the following panels, fighting authoritarianism has been a common theme in comic books for a very long time. Certainly longer than I have read them.

It seems a very strange place to be when the medium is used and abused by authoritarians nowadays to stifle and in some cases obstruct voices, perspectives and points of view.

Everything seems much more restricted or narrow.

Perhaps like blinders on a horse to prevent them from being startled by things coming from beside them. It prevents alarm in other words.

Tacky as it may be, the huge variety of content could be a reason it wasn’t as popular perhaps. Maybe the HUMAN TORCH never carried the memory and recognition or perhaps the iconic stature as he could have been as the oldest of superheroes that he was.

Was it was just too far of a stretch for it to remain believable? 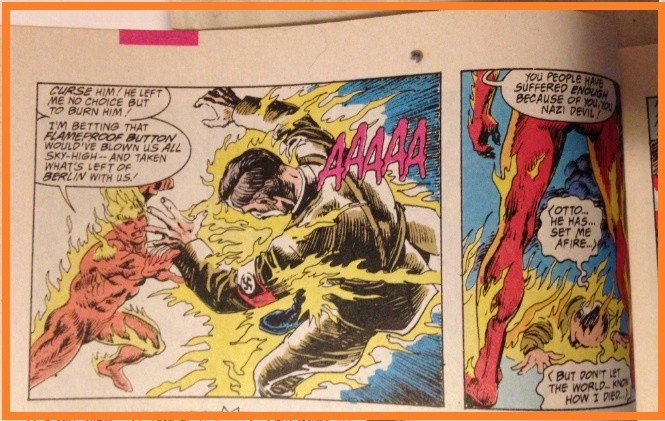 When I bought the book I thought it was terrific and was just another helpful motivation to my little hobby at the time of doing 1/35th military miniatures. 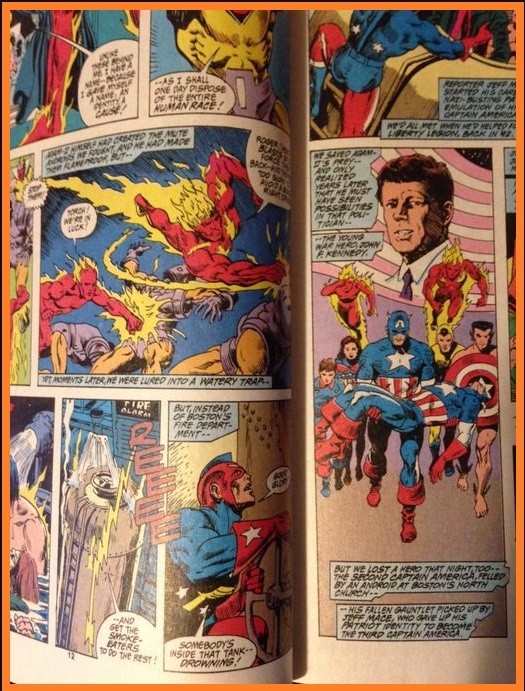 I still think the art and fantastic story telling is entertaining of course, it’s only that now with time; I see it in much different ways. 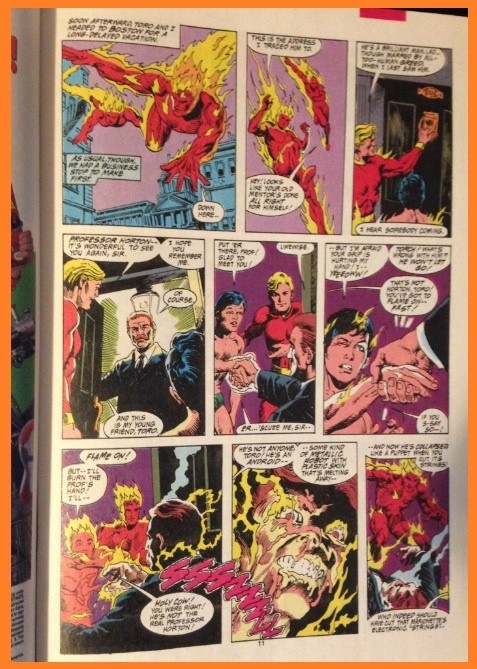 The issue also touches lightly on an exploration story of Torch and Toro in the Pinochio-esque quest we see reflected in countless other “android” stories, legends and modern myths that many would be familiar with today.

The quest to meet their creator.

That particular thread ends with a daring twist that ensures further plots and adventures can continue with the same line. 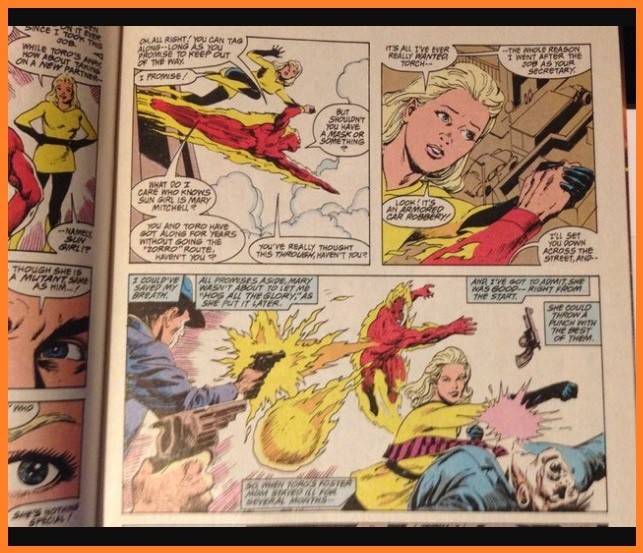 Torch and Toros’ fabulous secretary Mary Mitchell shows the world she can keep up with the best of them and kick ass alongside our concerned hero in another side story. Sun Girl is an anti-MarySue and it’s perhaps one of the reasons that I find her so likeable. She’s a bit ditsy and naive to many things but she overcomes this and many other obstacles to be as effective as she can be. She gains the respect and loyalty of her friends in ways that didn’t exist when she started her transformation. She grows and learns about herself and has tools to combat new challenges. She’s an interesting character.

In other words the book is crammed.

I think Stan would have had it drawn out into  more issues in the series so it wouldn’t be so much overwhelming history compressed in so quick a read.

Someone upstairs seems to have said:

“Whatever do it – but you only have four books so just get it done!”

…and that was that as they say.

Four books doesn’t seem to do it justice and there’s just too much to absorb in the way they’ve assembled it.

Maybe the “Blitz” is why it was appealing to me then.  Looking at it now, I wish someone would pencil up proper origin that is faithful as this one is, but gives the story a bit of rope so that the characters can breathe.

Stans insert in this issue is one that I’ve featured in another Soapbox Revisited but I’ll include it here for accuracy and for those that might not have seen it yet.

I see this as some of the first signs in 1992 that newspapers were no longer featuring our favourite web slinger as commonly or as widespread as before.

The “Internet Age” was about to spawn and 1992 stood pretty much on the precipice.

An insert towards the end of the issue compiles information gathered for Sterankos “The Steranko History of Comics”  in 1970 and that was thoughtfully reprinted and included in the issue. 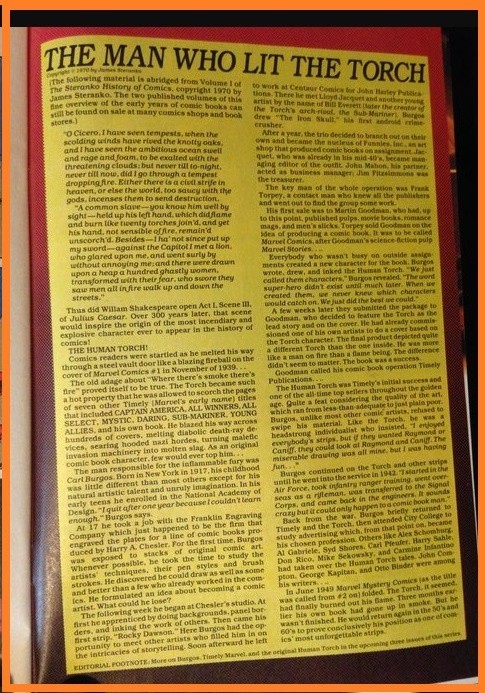 Nobody knew what would happen in this new age of digital media potential.

Most people didn’t even know what it was or care.

By 1998 when Windows had to completely rethink how serve the needs of hundreds of millions instead of the 80 some million that were online by 1995.

Music, Books, Movies – everything. We are still very much in the immediate post-digital age.

We had Naptser, print media everywhere attempting to adapt to a totally revolutionary marketplace for information and amalgamations of global information distributors in order to simply survive.

Everyone out in this Indie-Sphere are products of that revolution and it’s still happening in many ways.

The changes that this shift has begun haven’t really finished running their course and so we are very much still in it.

See you next week. Cheers!

Back Issue Spotlight: X-Men: The End: Book One: Dreamers & Demons