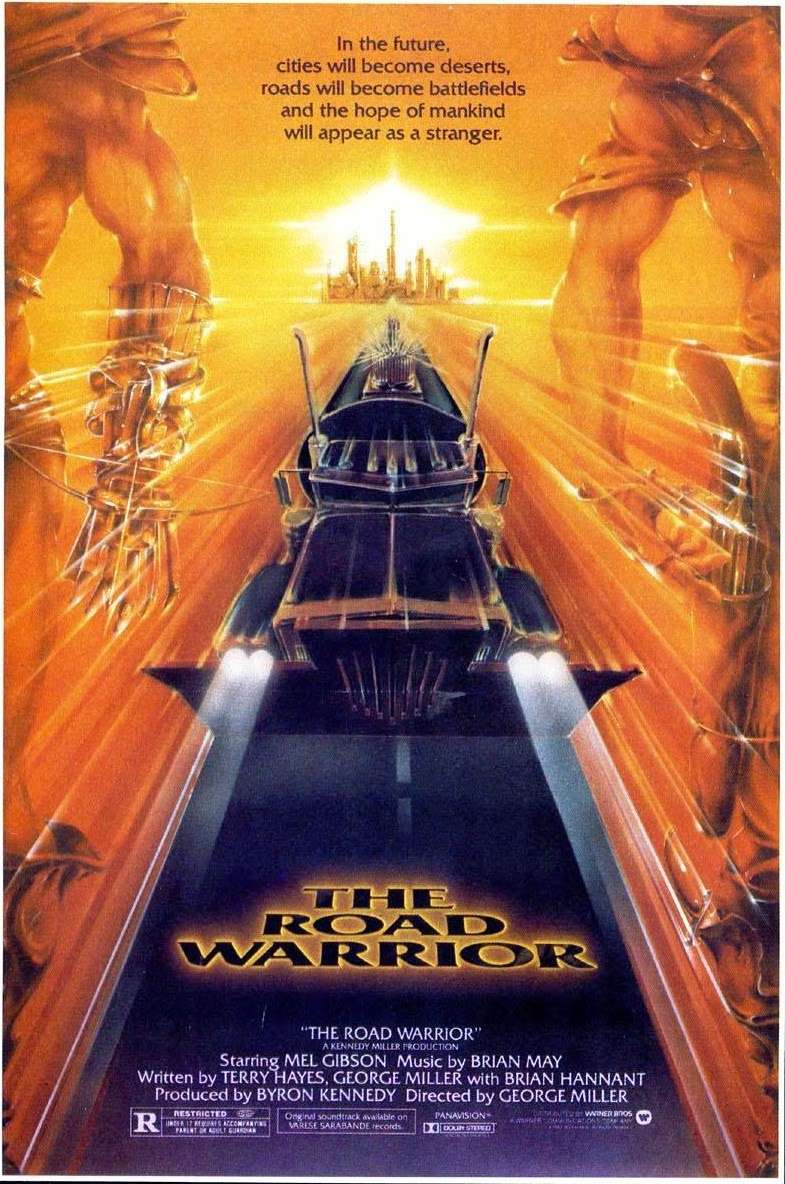 The Mad Max series gave a big boost to the genre of “post-apocalyptic” fiction but first movie, the eponymous Mad Max, wasn’t about recovering from the collapse of civilization so much as documenting its decline.  It falls very much into the near-contemporary Death Wish and Dirty Harry films in which cops and law-abiding citizens are left defenseless by a bloated and ineffective government.

The Road Warrior (1981) is different, advancing the decline further, imagining that everything has come crashing down and all that remains is scavenging gangs of maniac motorheads harrying the remaining outposts of civilization.

I’ll be honest: this is a pretty stupid movie.  It has plot holes the size of semi trucks and all sorts of hand-waving to push things forward, and verges on incoherence at times. 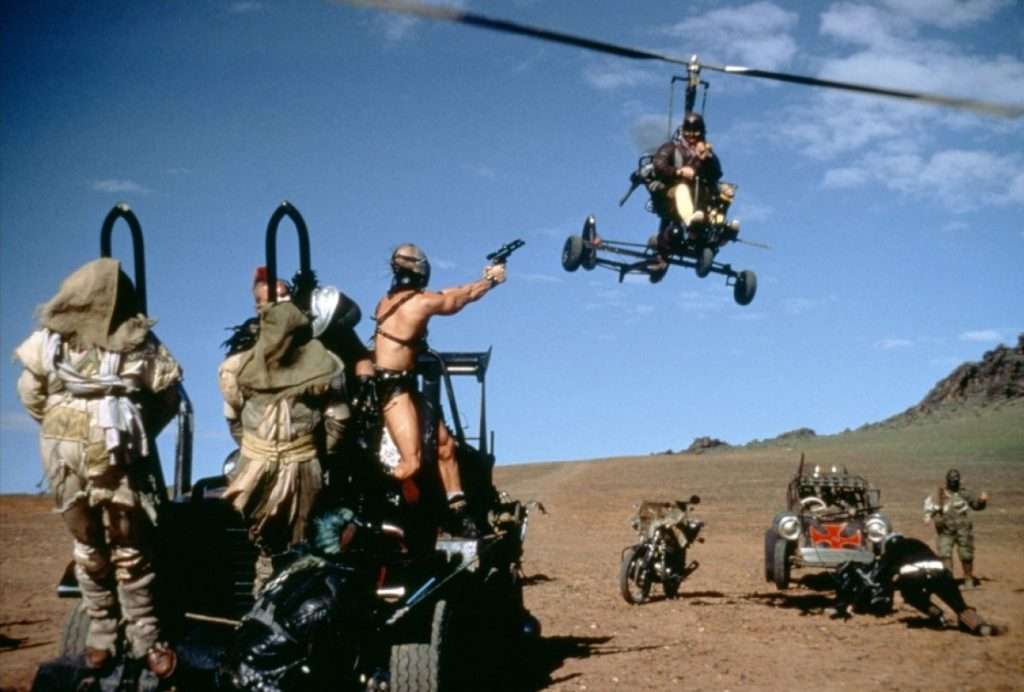 Seriously, the story makes no sense.  For example, there is no reason the protagonists and Lord Humongous can’t simply do some sort of barter trade.  Even the most violent barbarian peoples – the Mongols, the Huns, the Vandals, the Goths – were willing to trade when it was profitable.

Also: where are the firearms?  No, I don’t expect John Wick levels of armaments, but these people clearly have the metallurgy to soup up engines so machining barrels and bolts to make crude firearms is no great stretch.  In fact, we know these things exist in places like the Khyber Pass – which is arguably exactly what the world of the The Road Warrior would really be like.  Some crude black powder cannon would make the fortified settlement impregnable, which is obviously why it the writers didn’t allow it.  Also – stopping arrows isn’t that difficult so why not hang some more sheet metal to protect the flamethrower crews?

Yeah, that stuff is annoying, but the movie’s distinct look has become part of popular culture, so with all those defects, The Road Warrior can’t be classified as anything other than a smashing success. 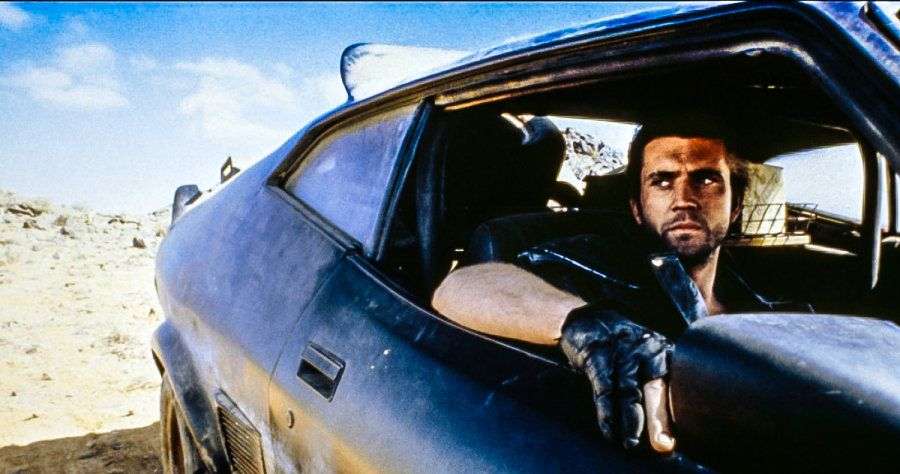 Truth be told, the whole point of the film is to watch a bunch of violent car wrecks.

I know I keep banging on about this, but all of the heroic “diversity firsts” of the last ten years have been fake.  They are the product of people who have zero idea what life was like before they entered it and assume that prior to 2005 (or whenever they were in middle school) women were unable to vote, never starred in films, “people of color” didn’t win Academy Awards and of course that only heterosexual relationships were shown on screen.

Vernon Wells’ marvelous mohawk-wearing raving homicidal biker lunatic Wez has a rather interesting partner on the back of his bike – yes, the dude looks like a lady, but he’s a dude, dude.  How could this be possible before today’s Woke era? 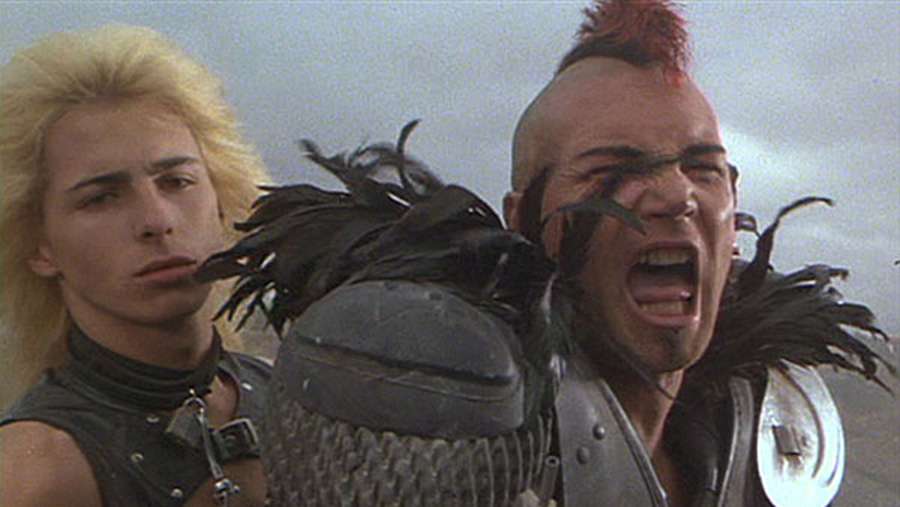 There are of course strong women, but by the 80s having women fight and do things was so common as to be routine.  I guess I have to make the obligatory mention of Sigourney Weaver, but that’s only because she’s so damn good as Ellen Ripley, who towers over our contemporary prissy princesses.  (Don’t worry, I’ll address Tina Turner in a future column.)

It’s All About The Ride

Okay, so the plot is silly but the action scenes are wonderful, the look is iconic and the music is superb.  Yes, that’s right, the soundtrack was by Brian May from Queen.  As soon as you hear it, you know it – it’s that distinct. This isn’t so much a film as an experience, a dark vision that has planted itself in the mainstream culture so deeply people today probably have no idea where it came from.

This is where it came from.

There is also a lesson insofar as the people who work to overthrow the existing order often have no clear notion of what comes next.  In that sense, the plague of ultraviolent punk rocker biker dudes serves as a cautionary tale for our present age.  The people screaming for smashing the system think they’ll be the ones with a megaphones and spiky armor, but given the amount of soy in their diet, I think that’s highly unlikely.  As always, careful what you wish for. 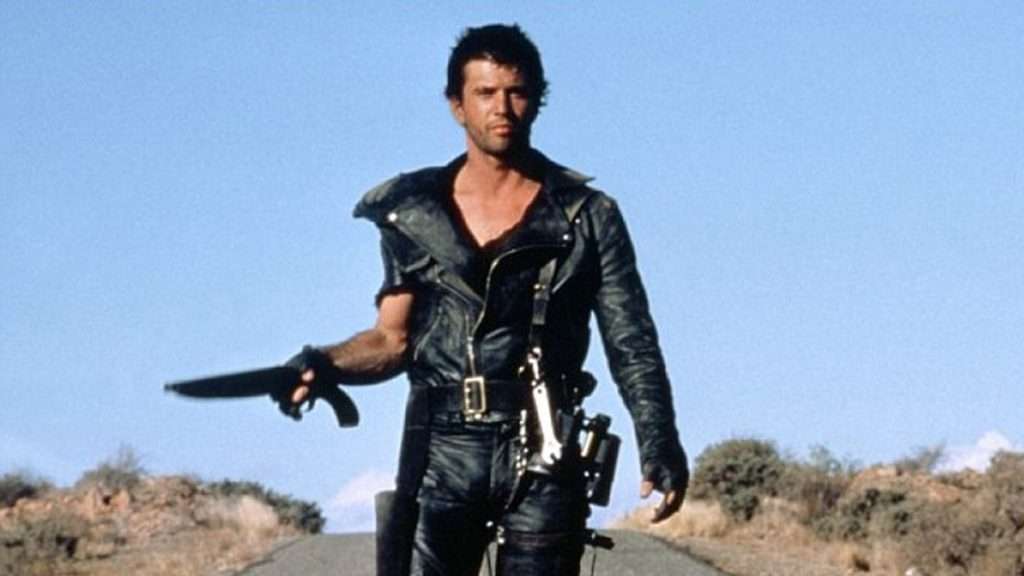