Another Cast Member of The Mandalorian Mobbed on Twitter for “WrongThink”

Apparently, Clancy Brown who plays Burg on the Mandalorian was recently mobbed on Twitter over the JK Rowling controversy, according to his own account on the Respondent podcast.

“Well, there was a tweetstorm about a month ago, Ayaan tweeted her support of JK Rowling.  Impressed by Ayaan’s support of a woman and fellow artist under attack, and by JK’s recent championing of young illustrators on Twitter, I retweeted my support of both women, and you Clancy retweeted your support and my support and that’s when the fireworks kind of went off.  A Twitter mob came for both of us accusing us of being transphobes, we were targeted trolled by a few outraged video gamers, even a small loud vocal minority of our own fanbases, a couple of disgruntled fans even started petitions to present to BioWare and EA Games to makers of Dragon Age demanding I never be employed again on their games.”

Clancy Brown, who is famous for his role as The Kurgan in Highlander, and who plays Burg on The Mandalorian said:

“First of all, I think whenever you put anything out on Twitter you should just accept the fact that you’re opening yourself up to getting mobbed.  No matter how innocent you are.  You know, I thought my tweet was innocent, I was just kind of making fun of everyone kind of coat-tailing everyone else, on that JK Rowling thing.  The Rowling controversy is real though, but also very interesting because she was talking about being a woman, and what it means to be a woman, and what it means to be a successful woman, and then putting it in the context of trans people, and everything kind got all bent out of shape.  At first she says “I’m an ally” and then goes into the science of it, and then it becomes all bent out of shape, and then the letter that Ayaan was signing onto or supporting, is signed by some pretty luminary figures.  The Harper’s letter.

But that letter was about freedom of speech.  It really wasn’t about the controversy that she got herself into, the hot water she got herself into.  And so Ayaan was supporting JK’s right to speech.  To say, whatever she thought about whatever subject she thought about.  No matter what it ends up being.  Because that’s actually what Ayaan does as well.

But, it pissed off enough people, to get us here today.  And to get us thinking about it.

Now the other thing is, everybody’s entitled to their right to say stupid shit.  In fact, we kind of want people to say stupid shit, so we know that they’re out there.  That’s something that you can’t go by halves, you have to defend your freedom of speech.  You have to defend the 1st Amendment right to say whatever you want, to assemble, all of that.

So people that are so mad that they think we think something, maybe their energy could be used better attacking someone or having a conversation with someone that actually does have some agency in the debate that they’re so passionate about. Rather than just a couple of voice over actors.

You can listen to the whole podcast here: 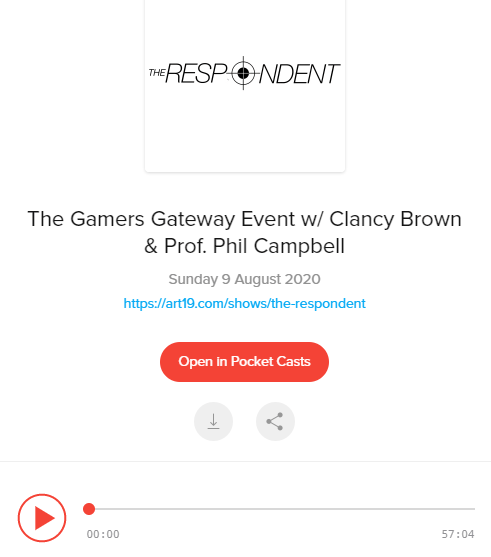 Thanks to Dean Mayes for the tip.