The Folly of Including Real Life Tragedies in Modern Comicbooks

While reporting on Tidal Wave’s new bio-comic about Ukraine’s president, the Willamette Week said the following:

Comics have a history of intersecting with world events, whether it’s Captain America punching Nazis or Spider-Man combing through the wreckage at Ground Zero. So it was only a matter of time before Volodymyr Zelensky, the president of Ukraine, got his own comic book.

These superheroes may have such a history, but before the turn of the century, most past writers usually avoided putting the fictional heroes directly in the middle of WW2, since here, you have superpowered beings who could knock down dozens of enemy soldiers in most surreal fashion, and it wouldn’t look good in comparison with real life where USA soldiers were experiencing hell on the battlefield in Europe with no such luxuries as you’d see in science fantasy. Yet the 2019 SyFy network article linked to by the Oregon-based weekly makes no attempt to acknowledge mixing characters from a sci-fi world with real life issues can come off as incredibly awkward. What they do say is the following:

Nearly two decades ago, the 9/11 terrorist attacks left the nation reeling. New York City was particularly hard hit, with the deaths of almost 3,000 innocent civilians and senseless destruction. Because Marvel Comics and its heroes had become synonymous with New York, the publisher felt it had to respond to the tragedy. And it had to be Spider-Man who addressed it. 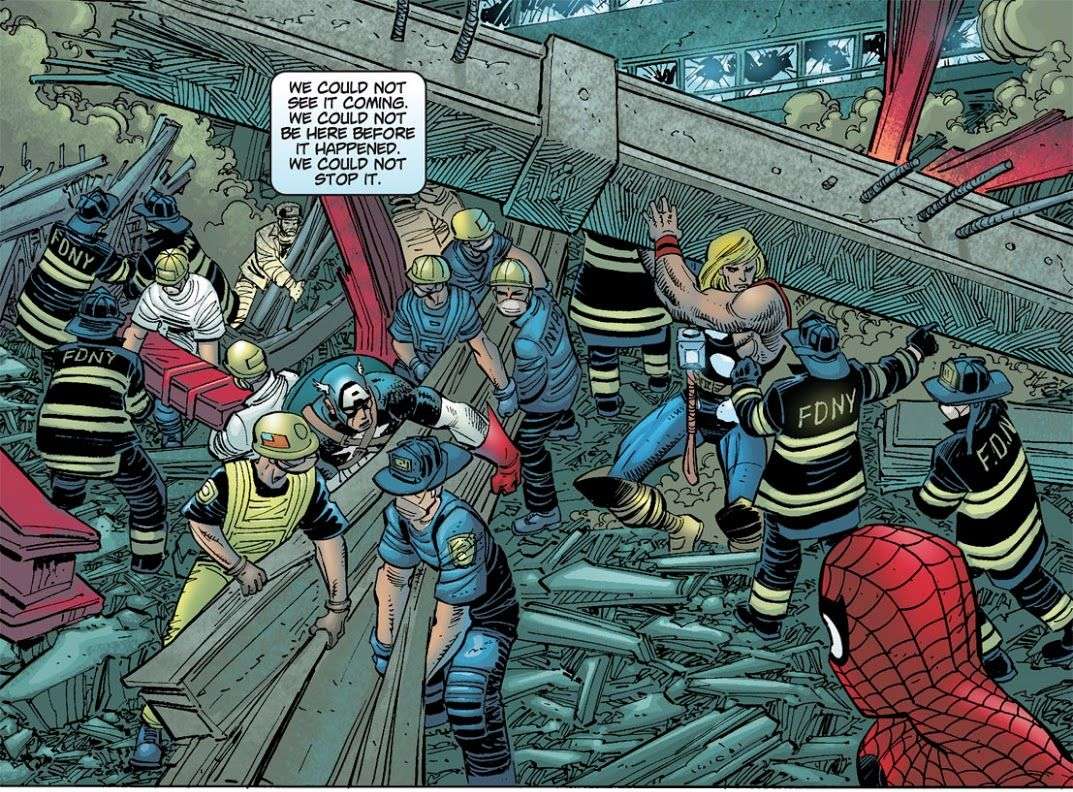 And why specifically must Spidey’s title be the choice series for what turned out to be an insult to the intellect? Why not Iron Man or Wolverine’s solo series? Obviously, because Spidey’s long been considered one of the most recognizable Marvel creations by far, and that’s how they concluded it would be only fitting to make the web-slinger’s title the one for focus on the issue, in number 36. Of course, they couldn’t bother to clearly name who exactly oversaw this whole project, which would’ve been mainly Joe Quesada and Bill Jemas. In any case, by employing a flagship title so noticeably for conveying this kind of story only makes it look all the more blatant. 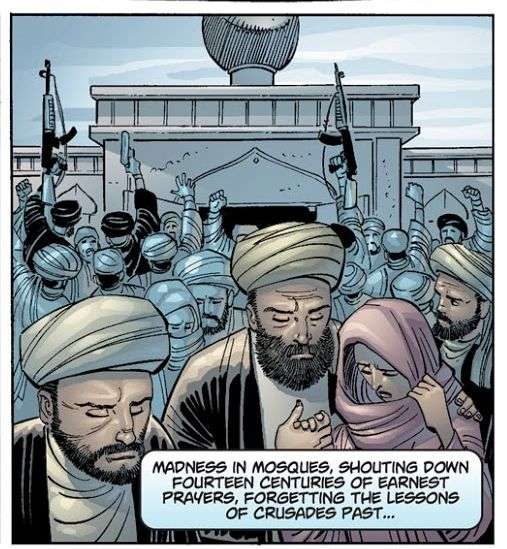 Now, I know Spidey’s physical strength isn’t enough to hold up a collapsing building as tall and heavy as the WTC was, and Shell-Head’s mechanics may not be either, but Thor could handle it with his strength, and so could Dr. Strange using magic, and considering various other heroes like the Avengers make appearances in the book, whose powers could possibly avail in keeping the building up long enough to evacuate the occupants (don’t be surprised if Quasar’s came in very useful for such a task), that’s one more reason why this was a long range embarrassment. Besides, what did it actually say about the Islamic jihadism that led to the tragedy? From what I could tell, all they really did was subtly imply the same kind of talking point George W. Bush used, that “a great religion was hijacked.”

The result was Amazing Spider-Man #36, aka The Black Issue. J. Michael Straczynski was tasked with writing the story, and he initially balked at the idea. But Straczynski’s story soon came to him, and he, artist John Romita Jr., inker Scott Hanna, and the rest of the creative team finished the issue in under a month.

SYFY WIRE’s Behind the Panel recently caught up with Romita and Hanna as they shared their memories about Amazing Spider-Man #36. Romita’s father, John Romita Sr., was one of the seminal Spider-Man artists. However, the elder Romita was initially against the idea as well. It wasn’t until Romita Jr. showed his father the finished project that he became proud of his son’s accomplishment with the issue.

Honestly, I’m disappointed with both Senior and Junior for approving this in the first place, given how farfetched it turned out to be, right down to the sight of Doctor Doom sobbing under his metal mask. And on that note, SyFy’s writers made sure to sugarcoat that part too:

Romita Jr. also admitted that the famous panel of Doctor Doom with tears in his eyes was his touch of artistic license. While that panel has been the topic of debate since it came out, the artist still believes it was the right choice. It set a line between comic book villainy and the real evil that struck New York at its heart.

Both Romita and Hanna pored over the details to accurately capture the mood of the city and its people. Straczynski’s story was so moving that Hanna found another way for the comic to spread its message of strength and unity 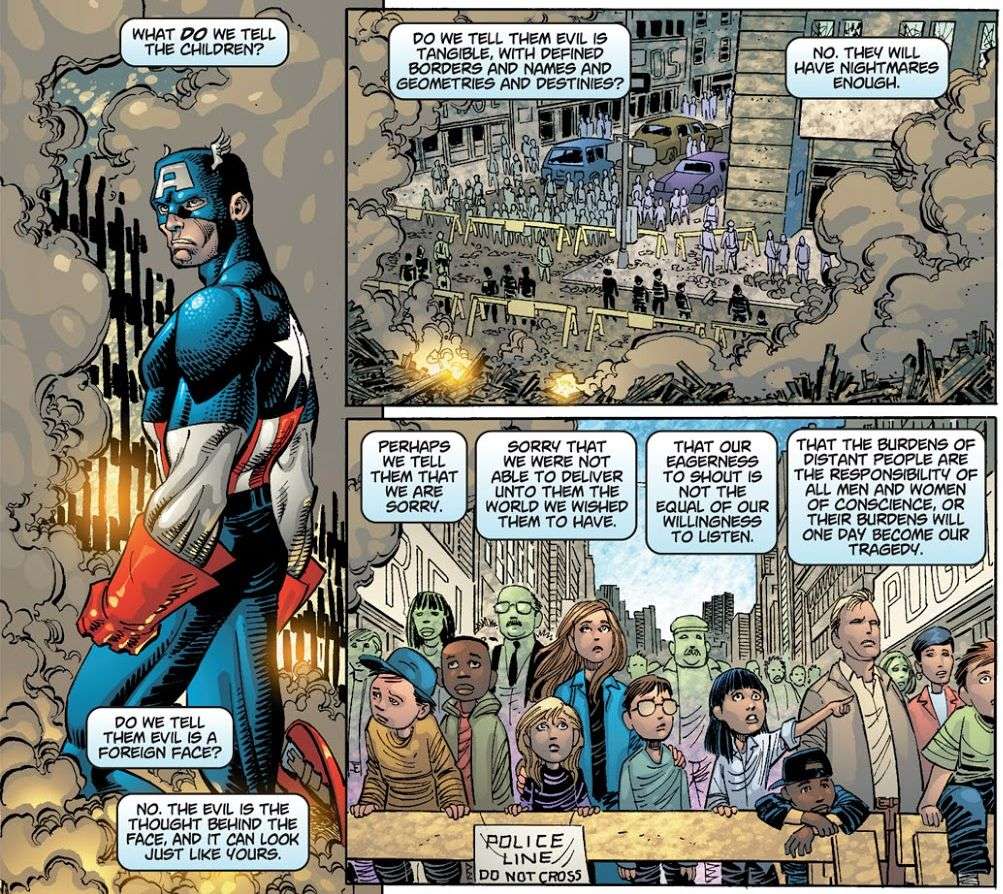 I wonder how a tale relying on stealth victim-blaming can be considered a work of strength and unity? Unfortunately, that’s what the tale contains, whether in terms of moral equivalence or otherwise, and it solves nothing. To imply we have to bear the burdens, as the panel on the side does, is tasteless, and minimizes the seriousness of the issue.

Considering all the stories in the past where the despot leader of Latveria visited carnage and mayhem upon innocents, including but not limited to the Fantastic Four, why would it look plausible for him to feel sorrow over other tyrants committing the same thing? It wouldn’t have made sense if Kang the Conqueror were illustrated doing that either, considering he too was depicted in the past employing deadly force in later stories coming after the Silver Age. Why, what about Bullseye? If he’d turned up in the story, after all the assassinations he’d been depicted performing for mafia syndicates ever since he debuted in Daredevil in the mid-70s, wouldn’t that too look bizarrely insulting? 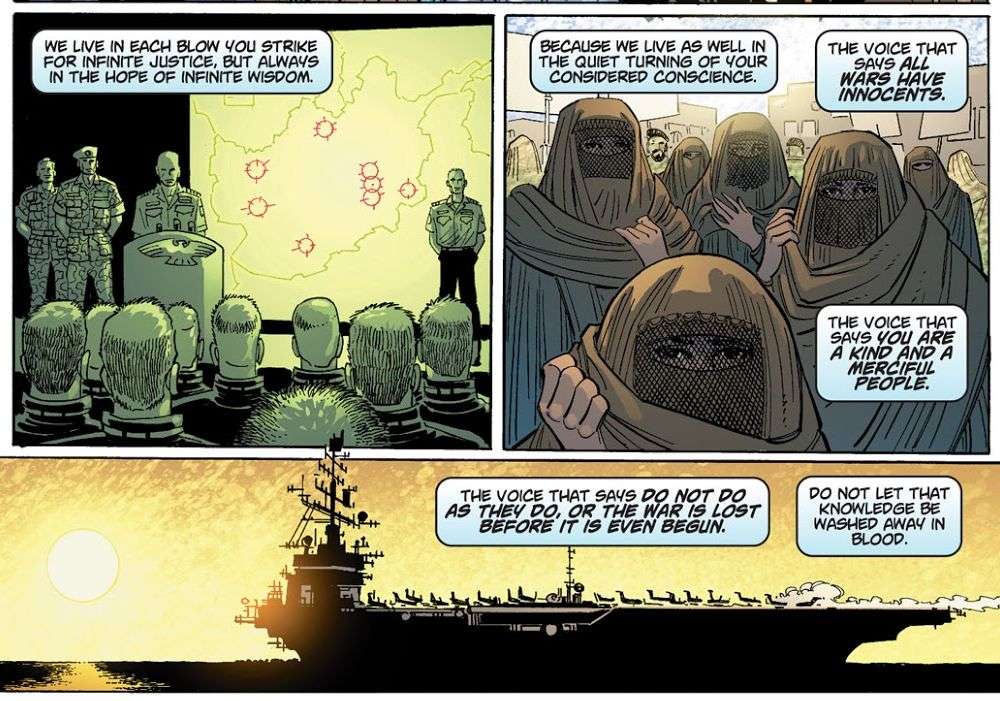 And the part near the end, where writer Straczynski urges, “do not do as they do, or the war is lost before it is even begun”, is also insulting. Especially if he sees nothing wrong with Islamic veils, as the panel suggests, and won’t consider they’re hurtful to women. Yet it’s hardly a surprise somebody coming from an ultra-liberal background could conceive a story featuring only so many woke talking points, subtle or direct, though of course, that doesn’t make it any less of a problem. What it does do is demonstrate how bad the influence of leftism is in modern times.

It’s a real shame some artists like the Romitas, whom I’ve considered impressive in the past, had to participate in this, or more precisely, that they’d be so accepting of the political approach employed by the writer of the story. And similarly, it’s a shame the MSM sources who’ve covered the history of this Spidey story approach it all through such a dishonest lens, refusing to consider that, while comics villainy may not be exactly the same as real life, it doesn’t make a science fiction world any more plausible a spot in which to tell a story like this drawing from reality. Nor does it help to make use of such naïve leftist beliefs as Straczynski did over 2 decades ago.