The release of Richard Stanley’s HP Lovecraft adaptation Color Out of Space (see recent post) prompted me to take a brief look at the author’s abiding influence on the movies and television.  This piece is slightly unusual in utilizing a TV documentary pitch of mine from around a year ago (March 2019), so any broadcasters reading who are interested in the subject – please take note and contact me.

Anvil-faced writer HP Lovecraft (1890-1937) was responsible for some of the most disturbing stories of the last century, with themes of inherited guilt, monstrous other dimensional entities, all-pervading evil, physical/mental corruption and of course the fearsome octopus-headed Cthulhu him/itself. Sadly, Lovecraft led a tragic life, dying in poverty before his the influence of his work had become recognized. 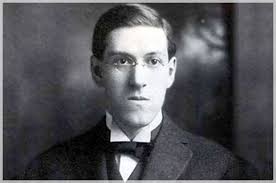 The Older Gods have returned

The Cthulhu Mythos and other dark tales from the pages of Lovecraft, Dunsany, Derleth, Machen, Chambers and others have seeped into popular culture, increasingly so of late. The Cthulhu Mythos is a shared fictional universe, originating in the works of American horror writer H. P. Lovecraft. The term was coined by August Derleth, a contemporary correspondent and protégé of Lovecraft. Sometimes tentacled, sometimes formless, sometimes demonic, but always terrifying, these entities represent the beings that existed before the Universe as we know it was formed. The origins of The Cthulhu Mythos and how it and other ‘Outer Gods’ have become both an acknowledged and unacknowledged trope in TV and film, include Cabin in the Woods, Pacific Rim, Hellboy, True Detective (season one), Stranger Things, Event Horizon, Fortitude, Pan’s Labyrinth, Re-animator, The Mist, Cloverfield, Alien, Dark City, The Dunwich Horror, In The Mouth of Madness and many others, such as the upcoming HBO series Lovecraft Country, which looks like a fascinating examination of the phenomenon and its burgeoning influence, and the aforementioned Color Out Of Space.

If you’ll indulge me, here’s  E.T.I  (1976) from Blue Oyster Cult, a band with a definite Lovecraftian/similar vibe; they also wrote The Old Gods Return, but I much prefer this one, with mention in the lyrics of Robert W Chambers’ ‘King in Yellow‘:

Finally – here’s another from this criminally underrated band, too often categorized as mere ‘heavy metal’ – stick around for the chorus.

I Love the Night

Netflix's 'Stranger Things' Was the Most Streamed Show of 2022
HBO Max's 'The Penguin' Series to Tie In to 'The Batman' Sequel
'Wednesday' Addams Officially Getting Second Season at Netflix
Netflix's ‘Wednesday’ Series Continues to Perform Very Well
Streaming Review: The Top Ten Most Watched Films & TV Shows of 2022
It's Hube's Top Five 'AW, C'MON MEH!' Moments of 2022!
Here's Why James Cameron Shot His Avatar Sequels All at Once