With the premiere of “Star Trek: Picard” upon us later this week, yours truly has assembled ten must-see episodes of “The Next Generation” which highlight what made Jean-Luc Picard Starfleet captain material.

Of course, “TNG” might be the only saving grace we have for Monsieur Picard; if what he’s said in the weeks leading up to his new series’ debut is any indication, we may be sadly disappointed …

1) “The Measure of a Man.” Picard takes on a zealous Starfleet cyberneticist eager to get his hands on Data. This season 2 offering shows there may be no one more dedicated to what the Federation stands for than the Enterprise captain.

2) “Q Who?” In this first appearance of the Borg, omnipotent nemesis Q humbles Picard and the Enterprise crew before what will become the Federation’s greatest threat. Can you imagine Captain Kirk asking for Q’s help to avoid destruction? It’s difficult. It appears easier for Picard, but leave no doubt that it was to save the thousand-plus lives on the ship, as Q aptly notes near the end of the episode: A lesser man would rather have died than ask for assistance.

3) “Yesterday’s Enterprise.” This highly regarded alternate timeline tale gives us a glimpse of what Captain Picard would be like in a (losing) war situation. After the Enterprise-C comes through a time rift, history is altered and the Federation is at war with the Klingons. Not only does Jean-Luc stand by his unpopular decision to send his ship’s predecessor back through the rift knowing its crew will be killed, he offers up one of “TNG’s” most memorable lines: “Make sure history never forgets the name … Enterprise!”

4) “The Best of Both Worlds.” A natural choice. Picard is abducted by the Borg and transformed into one of them. Using his knowledge, a single Borg cube rampages its way towards Earth killing tens of thousands in the process. Picard, with Data’s help, struggles to overcome the collective’s control … and eventually succeeds.

5) “Family.” The immediate follow-up to “Best of Both Worlds,” Patrick Stewart shows his acting chops as a man struggling with the ramifications of becoming a Borg. “So, my brother is a human being,” Picard’s brother tells him when Jean-Luc breaks down emotionally. See also the premiere of “Deep Space Nine” (“Emissary”) where Commander Sisko doesn’t hold back his disdain for Picard due to the Borg incident, as well as … 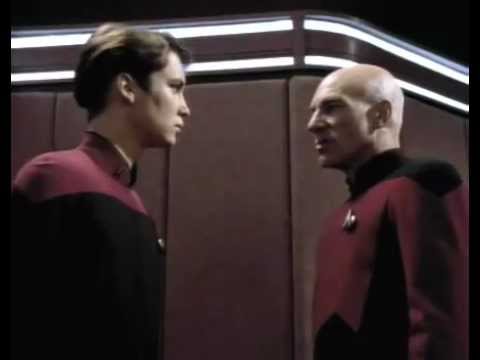 7) “The First Duty.” Like “The Drumhead,” it’s Captain Picard’s words which make the episode. After Starfleet cadet Wesley Crusher is involved in the cover-up of a flight training accident, Picard, upon learning what really happened, lets Wes have it: “The first duty of every Starfleet officer is to THE TRUTH!” It was a bit of wisdom he learned from the Academy gardener, Boothby.

8) “Chain of Command.” Picard crying like in “Family”? Begging for help from Q in “Q Who”? Don’t let that make you think the Enterprise captain is some milksop. After being captured by the Cardassians in an elaborate set-up, Picard endures days of torture by his captors, and never buckles when asked how many lights he sees: “THERE. ARE. FOUR. LIGHTS!!!” 9) “Tapestry.” When Q gives Jean-Luc an opportunity to alter his past, he takes it — and quickly regrets it. He finds himself assigned to a mundane position on the Enterprise, and Commander Riker tells him he’s just not fit for a command position. The episode’s message: Despite the wisdom one accrues while growing older, never change who you are fundamentally.

10) “All Good Things.” The series finale depicts Picard in three different time periods, trying to work together to save humanity. His utter devotion to the cause (literally, the salvation of Earth as a life-bearing planet) is portrayed expertly by Stewart, and just as in “Q Who,” the omnipotent trickster has to cede the good captain’s inherent goodness.

Current & Former 007 Actors Believe the Role Should Remain a Man

MTV Working On a ‘Teen Wolf’ Revival for Paramount+

Time Machine: A Link Back to 90’s Videogames