Super-Fans At Lucasfilm Have Only Helped Destroy It

You know, I was thinking about Rogue One the other day, which I particularly liked by the way; and I thought about that one in a billion shot you’d need in intellect, cunning and experience to be to be a Galin Orso. I was just kind of day dreaming about someone so intimately involved with a revolutionary creation. History is full of these examples, right time, right place, right skills needed. Yahtze!

Then I scowled and thought of Pablo Hidalgo, Lucasfilm’s in-house resident “expert” of all things Star Wars. The “go to guy”, the one the new story group (read: propaganda commissars) relies upon to inform them of everything they need to know about the “deep mythology questions”, the “deep universe questions”. You know these sorts of things that we fans of any science fiction based stories really feel is the very element that draws us into a story and makes even the unbelievable seem real.

And although I think given the last couple of years of what can only be described accurately as a massive multi-billion dollar dumpster fire, I have to give him credit at the very least, for being around at the precise moment when the internet became widely available and affordable for millions of people. Pablo innovated in this new market place in the service of Lucasfilms/Arts and evolved an interactive style of franchise support mechanism that allowed fans to interact directly with what they loved. The proto-genesis of social media if you really think about it.

This is perfectly in line of course with Georges’ own course over time, with the invention and engineering that he was forced to create in order to bring a vision to the screen for all of us. Pablo deserves recognition for the fact that he helped George update and refresh what we were hungry for and what we were lovin’ at that time. It’s was truly remarkable, all of it really.

Of course on the other hand, it could be that he used to be just like any other super fan that simply stuck around long enough, or pestered or nagged for long enough into to finding a way to make himself indispensable. Not thoroughly useful, just indispensable in a novel way. 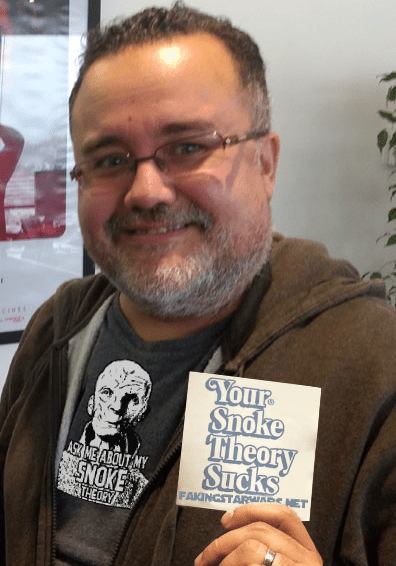 Used to be – is the key phrase here. Pablo Hidalgo seems to have forgotten what made him indispensable – his knowledge and thorough immersion in Star Wars lore. A gatekeeper of sorts if ever there was one.

But I think now, looking on after more than 35 years that he like other folks who have gained such an intimate inside connection and knowledge of a global phenomenon; has developed a real capacity to cause an incredible amount of damage if his ego is harmed.

Not only that, his fundamental position seems to be obsolete as “creative executive” if we use The Force Awakens, The Last Jedi or Solo as examples. Weaponized hyper-drives? SJW Droids who would have been immediately melted for scrap for a single subversive or disobedient line fused into the superstructure of the most famous freighter in the galaxy? Jedi mind tricks without any knowledge of the Force at all? Fan theories suck? Really? 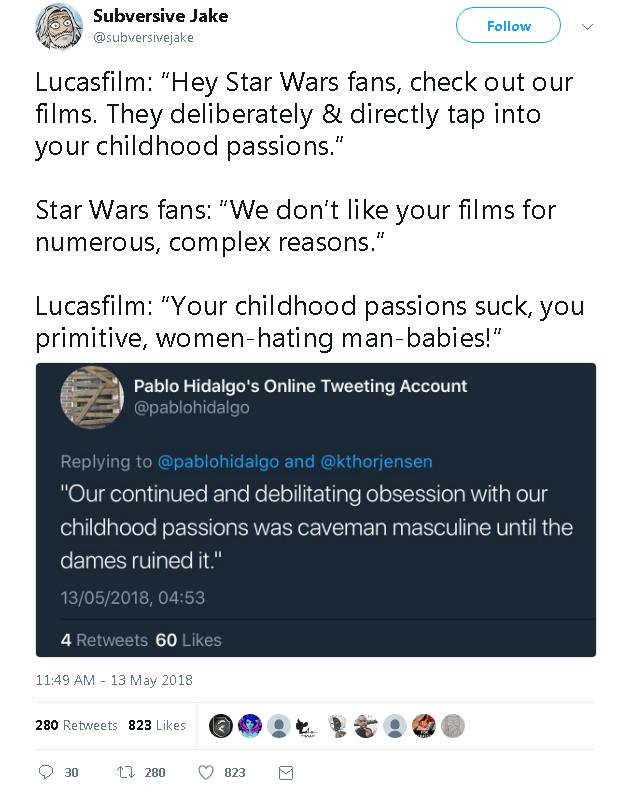 Here we have a guy whose primary role under George was as “fan liason” who now uses his position to mock and harass fans with contemptible and petty insults and mockery. What sort of inflated ego, comfort and sense of importance must you have in yourself and in your position to behave in such a way? How about just doing your job? Any possibility of being humble and grateful? 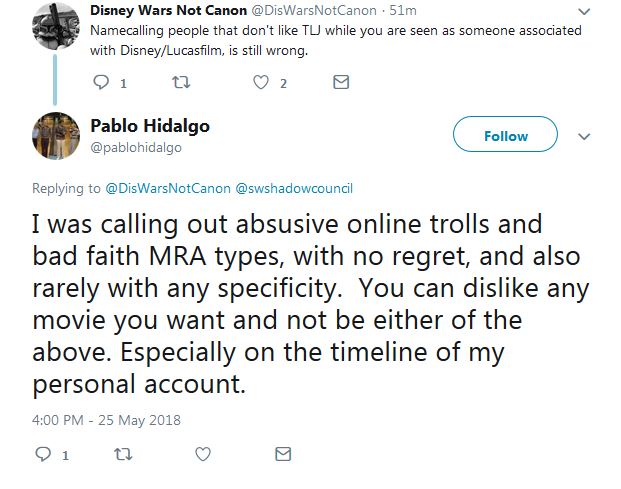 Is it realistic for us to want you to make sure the “story group” keeps within the world building lines that have been established for almost a half a century? Isn’t that what you are there for Pablo? 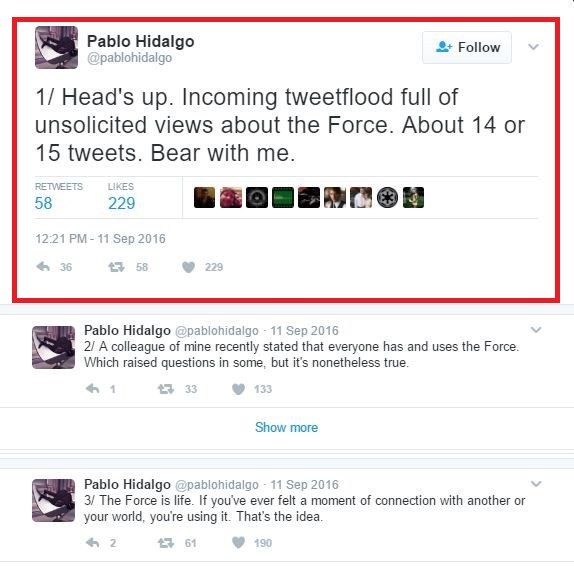 We don’t expect you to know how to write, we’ve seen your work; but we do expect you to stand up at the table when some farcical, uninformed and fantastical idea is put out. Maybe try to keep the front wheel down on silly ideas that is clearly designed to take our beloved mythology and turn it into a tool of indoctrination and social engineering. As a super-fan, we expect you to represent some kind of order or even reason and voice some kind of outrage at the thought of using Star Wars to preach moral and political authority.

Shill much Mr. Somebody?

Sure Pablo, let’s blame the iceberg because as a self-styled Titanic, you had the audacity or the lack of integrity or over confidence to intentionally smash right into it. The result? Naked mediocrity, sloppiness, resentment and a stubborn, willful ignorance exacerbated by a lack of capacity in leadership. 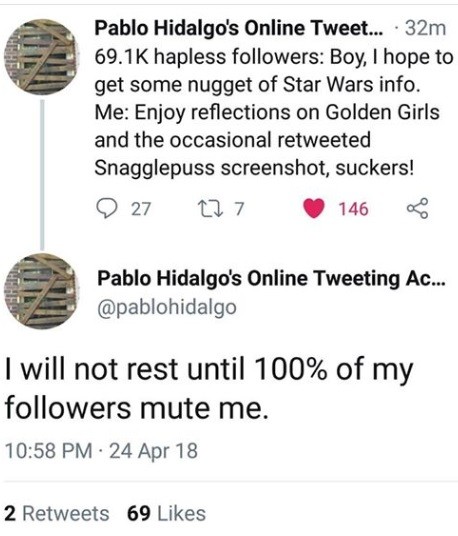 Compartmentalization and pathological secrecy has a great deal to do with this situation as well I’m sure, but there seems to be no direction, no plan and indeed no story to give guidance to. The story group bigotards are making it up as they go along. They obviously have about as much use for Pablo as we have at this point. Just look at his twitter feed and it’s lack of anything Star Wars related. I’m sure as long as he tows the line, he’ll keep his position, but a word of dissent? We know how that goes when you appear to be white and have a “weaponized phallus” don’t we?

So why is he still there? He’s got to keep himself relevant of course or he’ll just end up another ejected and disgruntled fan won’t he? Perhaps he already has been. So, he uses the same tired, standard SJW’s tactics of harassment and insult and then claims victim hood when the dog he’s been teasing the shit out of bites his hand off. Insult-block, insult -block. How very droll… 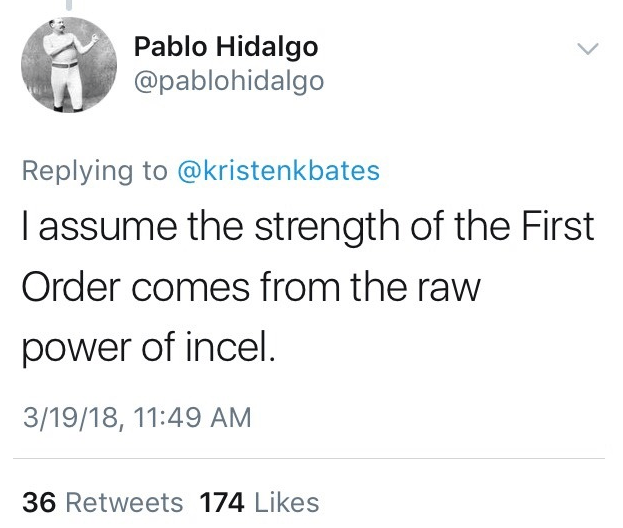 Poor wee lamb…The only ones cheering you on Mr. Somebody are the ones who are actively destroying what you used to love. I remember when Pablo Hidalgo was the one who answered your questions and kept the hype up for Star Wars. A great cheerleader then, but what about now?

A lack of supervision and a lack of direction, logistics and planning have created a situation where even the tech and engineer folks at Lucasfilms and Pinewood who are just trying to do the nine to five are really getting pissed off. I’m sure they have the same question we do – “who the fuck is this guy and why is he even still working here?”

Add to that other hyper inflated egos that are more concerned with PR, red carpets and are so obviously drunk on their own power in the medium that they’ve completely lost sight of what they are supposed to be doing- telling stories that appeal to the widest possible audience, not divide and antagonize them.

Pablo has reset his Twitter account, as have others at Lucasfilm who have taunted and mocked fans over the past couple of years. He now has only a personal style Twitter feed which deals only with real life type stuff. No Star Wars material to be found there.  He strangely, hasn’t commented on Star Wars Resistance publicly at all…I wonder why the erasures and silence?

Regardless, Lucasfilm is now a ship without a rudder and a self-styled captain and gatekeeper of all things creative and “canon” dealing with Star Wars is perhaps so twisted on the spirits he’s hidden away for himself that he can’t even see the mutiny consuming him.  Apparently he is too inebriated by his own sense of importance that he is unable to care. Perhaps like us, he has become disillusioned with his ship.  Maybe he is just entertaining himself while the whole thing burns. His relevance is tied to Star Wars, so what is he doing?

Ego is a powerful drug. I think I read somewhere, something about power…or corruption…absolutely…or something like that.

We seem to have a spoiled and entitled brat and his chums, who are playing in a muti-billion dollar sandbox they’ve claimed for their very own. He along with others are being encouraged to do it by those who now see that same beloved sandbox as a money machine and a platform for indoctrination and it is now painfully obvious.

Instead of building upon a legacy or at least making sure those claiming to build upon it color between  the lines, he’s instead acting as if it’s a game to toy with, to pick at, dismantle and to “subvert”. We know some other round headed so-called “fanboys” who are busy with the same destructive behaviors and ideas.

Can we have some leadership here? What about we have some passion and just a touch of respect for the legacy and the lifelong fans of that same legacy? We’re not asking for the impossible, we simply feel that those who do not see the importance of what they are supposed to be doing and who show us nothing but contempt be shown the door without delay.

We’re asking only what Uncle E had so eloquently put it back in June, 2018:

” Lucasfilm should be like a forest fire…Just clean them all out.”

Do it now Disney, do it ruthlessly and don’t look back.

You have mice pissing and shitting all over your house.

Clean them all out.