Still Been No Appearance of a President Trump in the Marvel U? Why Not?

Inverse says that, about a year after Donald Trump was elected president of the USA, he still hasn’t made an appearance in the MCU in this very prominent role. The best the comics has been able to do is to make a mockery of President Trump by putting his voice in the mouths of villains or simply making him into a villain caricature.  The Inverse article talks about what past presidents and other politicians have been drawn into the four color pages over past decades, a practice that’s got a lot of ups and downs, and can always be in questionable taste, especially today:

Iron Man and Captain America rush down the White House’s storied West Wing and throw open the door to the Oval Office. Galactus, the Devourer of Worlds, is headed to Earth, and the Avengers have a plan to stop him and save the day. They just need to inform the president in order to prepare for an epic superhero battle over the very fate of the planet.

Who are they about to talk to? 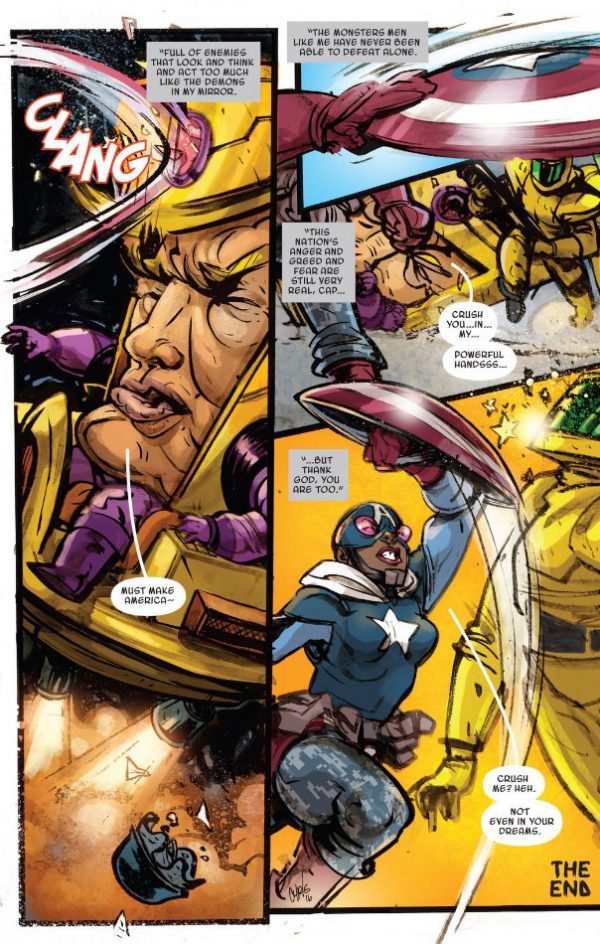 It appears they’re trying to avoid giving a likely answer themselves, because they can’t bear the thought of it, but most likely the backlash by specialty store managers who stated the ultra-political flood in their recent content is alienating customers had what to do with it so far. Even before Trump was elected, Marvel produced at least a handful of attacks on him in such guises as M.O.D.A.K, a bizarre allusion to the villain called MODOK, and the Ms. Marvel series, lest we forget, boasted one of the most blatant forms of election propaganda around. 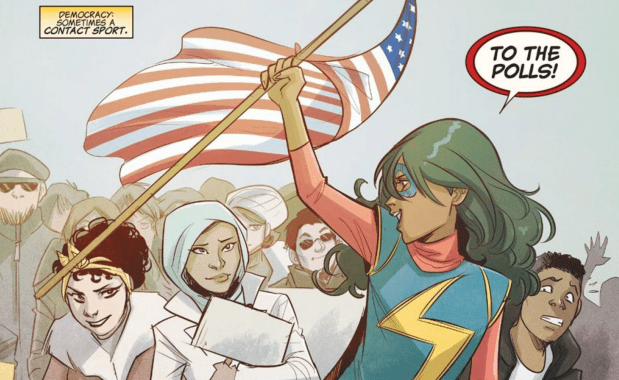 UPDATE: From a panel of preview art from the new Marvel Two-In-One title due out in December, here’s Marvel’s latest attempt at political humor at President Trump’s expense by their “humor” writer, Chip Zdarsky. Did they EVER have treat President Obama this way?

The Inverse article also brings up DC’s own approach to politics:

In the early 2000s, DC ignored George W. Bush’s presidency, instead electing Lex Luthor and a couple other fictional politicians before eventually syncing up with real life and putting Barack Obama in the White House. A reboot of sorts, the New 52, undid this, and brought Dubya back into continuity. Trump hasn’t appeared in DC comics (save for an out-of-continuity cameo in Dark Knight III), but he’s assumed to be the president. 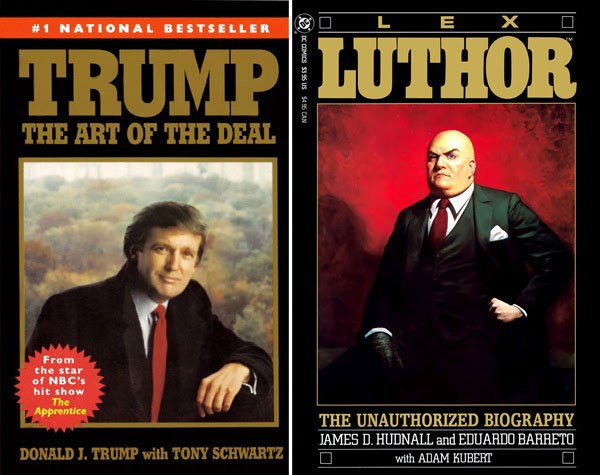 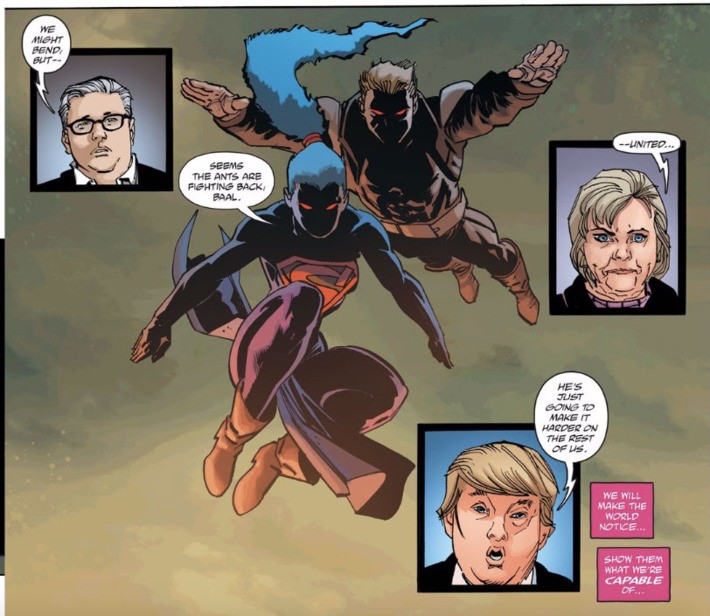 On this, I want to make clear that after the 80s ended, they largely refrained from featuring real life figures for a time, with real life references few and far between, although let’s note that for much of the 90s, Bill Clinton was president, and they might just as well have seen fit to do so because Democrats aren’t the concern of such liberals. But by the end of the past decade, they began moving back to featuring real life political figures more noticeably, as seen in the recent Green Lantern issues by Geoff Johns, where he inserted Islamic propaganda into its pages; one of the most shameless moments he exploited any comic for the sake of his degrading political positions.

Depicting the president is always a bit of a challenge — and Obama’s Spider-Man feature always read as more of an overt endorsement than typical presidential appearances. Usually, Marvel’s presidents are men who deserve (and receive) great respect. Pop culture often depicted George W. Bush as a dimwit, but in Marvel comics, he was wise and good. He made mistakes — maybe going along with Iron Man’s side in the Civil War wasn’t the right course of action — but he was trying to do the right thing. Richard Nixon, of all people, got a respectable depiction, even if there was a little bit of (mostly) good-natured ribbing involved. And, yeah, Ronald Regan turned into a mutant lizard monster in 1988, but it wasn’t his fault and he got better.

I’m afraid that’s not entirely true. If memory serves, Garth Ennis wrote a pretty ludicrous rendition of Bush in the early 2000s series of the Punisher, and even Nixon had at least a handful of negative renditions in his time. The Bronze Age tale where Captain America discovers a high-ranking political figure to be a ringleader of the original “secret empire” was supposed to have been an allusion to Nixon, so it’s said, which doesn’t exactly count as a positive metaphor. But how fascinating they bring up the awful Civil War from 2006, where it made little difference what superheroes supported which policy; it was all throughly irritating how Mark Millar, Brian Bendis and company saw fit to attack the Patriot Act via metaphors. And they’re right about the Obama issue in Spider-Man being an endorsement – a most shameless one at that – of a politician whose policies proved disastrous for the USA.

They turn next to a Marvel story from nearly a decade ago, written by Bendis himself, featuring Trump pre-election in an insulting light:

Trump has popped up in comics in various forms. A July 2016 issue of Spider-Gwen featured a supervillain who was clearly a grotesque parody of Trump, though that comic wasn’t part of the normal Marvel canon. But, the Donald has appeared, as himself, in a Marvel comic — it was just eight years before he became president. In The New Avengers #47, which came out in 2008, writer Brian Michael Bendis portrayed the then-businessman and reality TV star in a rather unflattering light. In the comic, Trump’s limousine blocks an ambulance, and a righteously annoyed Luke Cage lifts the limo out of the way.

“I will sue the—” Trump begins, emerging from the door.

“Get your ass back in the car!” Luke yells, and Trump sheepishly retreats. That same Trump is now, presumably, Luke Cage’s president. We just haven’t seen him yet. 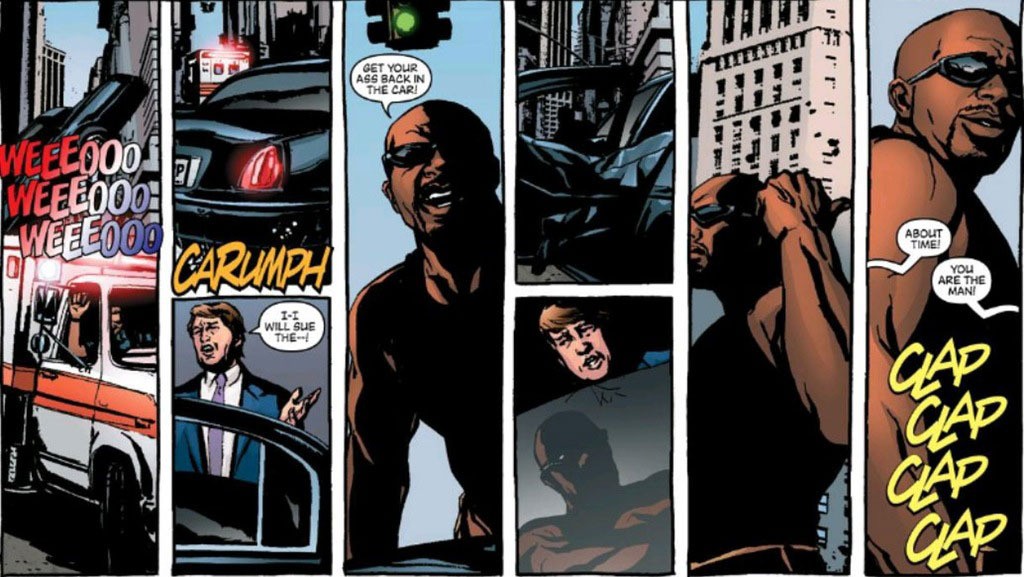 Again, this could have what to do with the aforementioned consumer/retailer backlash, but for now, we know Bendis conceived one particularly negative depiction of Trump as an ambulance-blocker. Tsk tsk. What a disgrace.

So, Trump hasn’t made an official appearance as president in the Marvel comics — and getting a straight answer out of Marvel about whether or not he was the president, and whether he’d ever appeared, wasn’t exactly easy. A Marvel representative originally gave Inverse a somewhat unclear answer about the company’s stance on who the president was, but another rep later provided a more concrete statement when asked to clarify:

“As always, the Marvel Universe reflects the world outside your window – with real places and real people,” a Marvel spokesperson tells Inverse. “While our stories do not focus on real-world personalities, political figures and celebrities live in the same world as our characters.”

That’s a tacit admission that, yes, Donald Trump is the president in Marvel comics, just like he is in the real world. And while Obama and, more recently, Canada’s Prime Minister Justin Trudeau had brief starring turns in single comic issues, Marvel’s correct in saying that its comics don’t typically focus on real-world politicians. But, real world leaders do make fairly regular cameo appearances, as we’ve seen — and President Trump hasn’t made one yet. 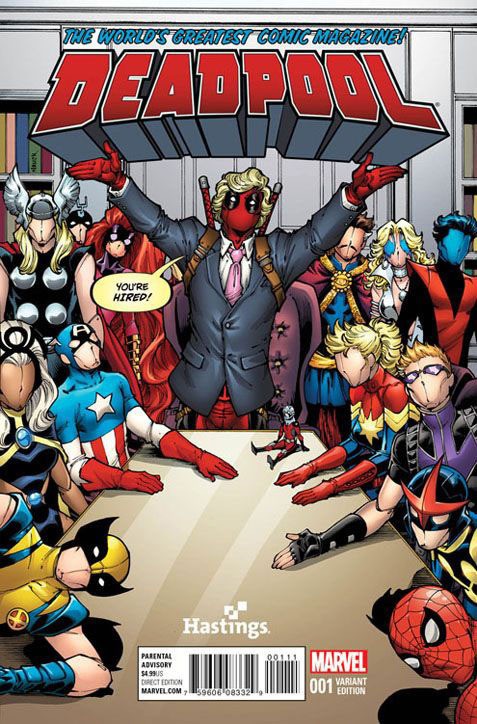 IMO, it’s actually good he hasn’t. The retailers/consumers seem to have had some impact, though unfortunately, they’ve still been unable to rescue Mary Jane Watson from the clutches of horrible editors and writers who’ve mistreated Spider-Man’s wife in several ways. They continue to offer another possible reason or two for Trump’s absence from the MCU:

Trump is so uniquely controversial, it would seem, that it’s better to work around the Oval Office rather than go into it. Show Trump with the same measured respect as previous presidents? Marvel’s normalizing him. Take a critical stance? Well, then somehow Marvel’s #FakeNews, even though it publishes fictional comic books.

It’s unclear how much of this might be trickling down to the company’s editorial wing, but Marvel Entertainment’s reclusive CEO Ike Perlmutter is a well-known Trump supporter. He donated $1 million to Trump’s campaign, and enjoyed a steak dinner with him in March. Explicitly putting Trump in the comics could be an internal third-rail, one that’s best avoided.

Not necessarily. Perlmutter didn’t stop them from resorting to negative potrayals in the past, so it’s unlikely he did this time either. Once more, the consumer/retailer backlash to Marvel’s heavy-handed political injections, which were stunningly more blatant than ever before in their history, may have had some impact in getting them to stop, even though that’s just a drop in the bucket of what positive effects the readership could have. We’ve still got a long ways to go, and the resignation of Joe Quesada and Axel Alonso from the company would be positive steps in the right direction. Certainly if they’re replaced by somebody who actually does believe in decent entertainment and not succumbing instantly to SJWs as Marvel’s done several times over the past few years, surely deliberately. And keeping overt leftist politics toned down would also be a great help.