Star Wars Rumors: Has Rey Been Revealed as a Skywalker?

As readers of this blog may be aware, Rey’s parentage has been hinted at in various media. In the novelization for The Last Jedi, it was suggested that Rey would be Luke’s niece. And there were suggestions in the film itself.

Now comes a rumor by way of Reddit, that if true could pose some familial complications for Reylo… 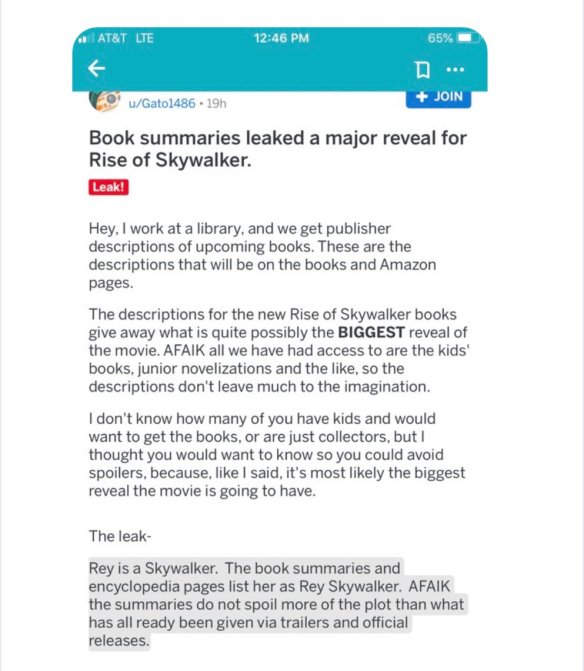 If true, this may be immensely more satisfying than the time that toy descriptions revealed the Enfys Nest character in Solo to be a female.

Even more satisfying than this will be the bemoaning and backtracking of smug media entities who wrote how wonderful it was that Rey’s parents were nobodies and that anyone can use the Force (even though the Force was never restricted to Skywalkers in the first place).  Such as this comment from Matt Wood of CinemaBlend:

However, Rey’s parents being nobodies works really well. It’s great character development for Rey, it’s a subversion, and it plays perfectly into the key theme of The Last Jedi: greatness can come from anywhere. Rey doesn’t need to be tied into another character from Star Wars past to be special or powerful. She is those things simply because she wants to do good. Some think that Kylo Ren was lying (Rian Johnson has gone on record saying he wasn’t), and J.J. Abrams could decide to undo it for Episode IX, but as of now, Rey’s parents are no one special

There are a lot of reasons why, at least for me, having Rey’s parents not matter works better than if she had been part of some iconic Star Wars lineage. Mainly, it works with The Last Jedi’s theme of greatness coming from anywhere—for example, the little boy from Canto Bight, Force-grabbing his broom in the final shot. The main franchise has depended so much on the Skywalker legacy that little wiggle room has been made for the future of the series, at least before now. For Johnson, specifically, he wanted the reveal both to reflect and subvert Luke and Vader’s in The Empire Strikes Back, calling back to how much it devastated Luke while also not giving Rey an automatic place in the Star Wars universe based on hereditary. She’s earned it on her own.

Or this statement from Bob Chipman from ScreenRant:

That certainly seems to be what’s driven the immediate backlash by a vocal minority of fans against Rey’s non-reveal reveal. It breaks the imaginary contract between “hardcore fans” and filmmakers whereby fussing over lore and rules means they get to have their devotion affirmed by being made to feel smarter and more “connected” to the narrative than ordinary audiences.

Or this statement from Nicole Drum of comicbook.com:

There are hundreds if not more articles on the internet talking about how Rey, Finn, Poe, Rose, Holdo, even Kylo Ren are the worst. How dare Disney tell a Star Wars story that isn’t all about dudes or all about the Skywalker family!

It’ll be very interesting to see how these SJW morons pivot after the reveal, if this rumor turns out to be true.

If you like, feel free to read Den of Geek’s 2015 article, 10 Reasons Why We Already Know Rey Is a Skywalker, to see how close they got to the mark.

As I said at the beginning of this blog post, this is only an internet rumor as of this writing.  If any more concrete evidence comes in, I’ll update this blog post.

Thanks to Stephanie Janiczek for the tip.

There is more information in the Star Wars Leaks subreddit.

These book blurbs may not be the final product, as libraries and book sellers get advance descriptions for ordering purposes. However, I do recall for some Marvel stuff we got books in that spoiled the entire movie before release. Especially in the “just learning to read” stuff, for kids who might not be old enough to go see a PG-13 movie, but are still big fans of the franchise. Do with this information what you will. I am not a fan of Star Wars, but I felt I needed to share this information for those wanting to avoid this for the sake of their kids or for those like me who want to know big stuff related to what they like. (I went and read those Endgame leaks!)

I am sorry, but I cannot share the source this was listed on as it was for our ordering account through the library itself, and not available to the general public. Please understand that if I had come across this on Amazon, I would share any links possible.

In the comments Gato1486 states:

Sorry, I must have misread. I’m just stating what I saw. It didn’t give away plot points, it just starts with the sentence “Rey Skywalker is a jedi…” Of course it could mean she took the name in honor of Luke, it could mean she’s a direct descendant. It could mean any number of things. Like I said, I saw this and figured people would want to avoid such a spoiler and made a post. Like I said before, I’m not a fan of the series, but, for those that I am, a spoiler of this magnitude would upset me a lot if I saw it.

To clarify, the “encyclopedia” page is from one of those “Encyclopedia to (movie)” books. We’ve got them for every Star Wars movie and some Marvel ones too.

It had Rey, a “Rey Skywalker” and a line pointing to her. I realize that without proof this sounds like I’m shitting in the wind. I really do. I saw what I saw, and thought people would want to avoid spoilers. I was told to post here from r/starwars.

I completely understand all the speculation, doubt, and accusations of lying.

It’s not in the system, it’s in our pre-sale ordering account.

A user on Saltier Than Krait subreddit points users to this Good Morning America clip with JJ Abrams hosted on Facebook, where JJ says they honor what happens in TLJ, but that there is also more to the story:

J.J. Abrams says “there’s more to the story” on Rey’s parentage in “The Rise of Skywalker”

Another Reddit user points to the following Tweets from Phasma author Delilah Dawson:

*whispers*
Y’all wanna know what THE SKYWALKER SAGA is about? pic.twitter.com/YuZJZ0dk8E

THE SKYWALKER SAGA is going to be the most exquisitely bound Star Wars storybook you can imagine, with gorgeous art by Brian Rood and words by me, retelling Episodes I through VIII through the eyes of the Skywalkers themselves. We’re talking SPACE FAIRYTALE style. pic.twitter.com/pxYYHF77qI

Writing this book was a revelation for me as a lifelong Star Wars fan. Watching the movies in order– closely and critically– on repeat– and seeing the themes, choices, words, and destinies of Anakin, Luke, Leia, Ben, and Rey ripple down… y’all, I cried. A lot.

My darlings, there are no spoilers here. I watched the same movies you did. I don’t have secret information. Inheritance doesn’t have to rely on blood. Ben Solo is a product of his mother, his mentor, his grandfather. Rey is called by Luke’s saber. That’s enough for me.

Did Delilah reveal Rey as an integral part of the Skywalker Saga by naming her?  Or is Delilah suggesting that Rey will “inherit” the Skywalker name, even if not by blood?