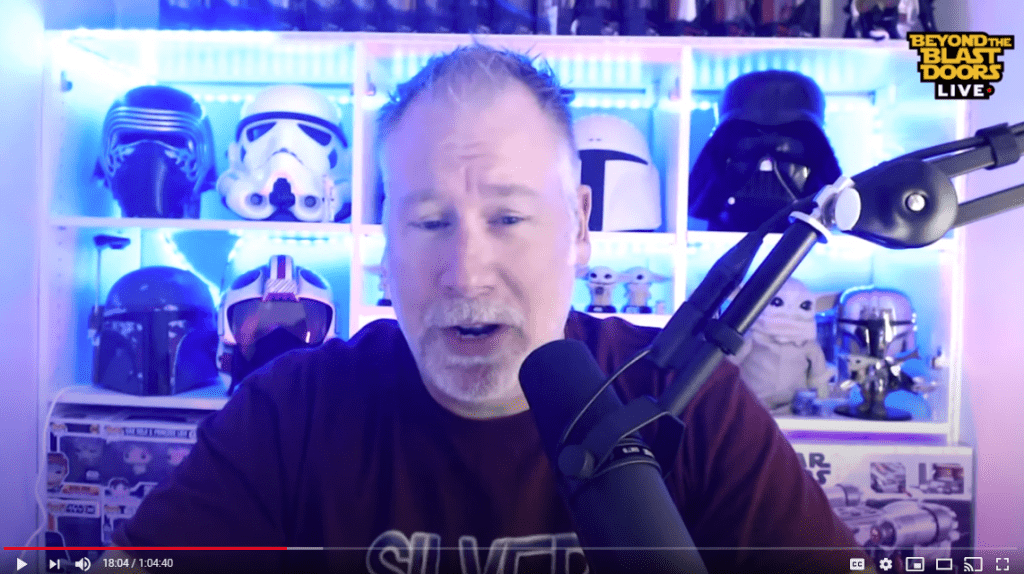 Pete Fletzer from the Around The Galaxy podcast recently appeared on Beyond The Blast Doors.

Pete was asked about his opinions on the recent remarks from Kanye West during his appearance on the Joe Rogan Show. But instead of discussing Kanye West’s remarks, Pete chose to make it all about the Fandom Menace, which apparently is all he really cares about. At about the 18 minute mark Pete says:

As I said in the opener, I don’t care about Kanye West.

Keeping in mind, a lot of these people hated the Prequels 20 years ago. So, here’s my perspective, if you’re using Kanye West’s opinion as support for your argument, maybe reevaluate your argument.

You can watch my documentaries on Ahmed Best and Jake Lloyd to see how it was primarily the media that was responsible for the hate towards the prequels, even according to the words of George Lucas himself. So Pete is either intellectually dishonest or utterly ignorant.

What Pete also doesn’t understand, is that unlike the consensus of the collective that SJWs are required to conform to, the Fandom Menace has no singular narrative, nor does it work to fashion one. There are some Menacers who like the Prequels very much, others dislike them, still others like me find them to be a mixed bag. So Pete is essentially making things up here.

Then after being asked again about his opinion of Kanye West’s statements, Pete again makes it all about the Fandom Menace. At about the 23 minute mark Pete says:

I do want to say one thing though, I don’t think it’s, I think the problem is, look, love what you want to love, and that’s awesome. And I’ve come around on the [unintelligible] Prequel list, I’m totally with him on that. And I get that point of view.

To me, it’s Kanye West saying something, and The Fandom Menace, and people who hate the sequels, latching onto anything they can grab onto, to hate the sequels. And look, again, at the end of the day, you love your Star Wars, go for it. Don’t spend energy hating people for not liking the same thing as you. That’s just asinine.

What’s actually asinine is the way that Pete Fletzer struggles with reality. The Fandom Menace was born from being called racist and misogynist simply for not liking Rian Johnson’s terrible movie. It was SJWs who attacked Menacers for not liking their crappy communist propaganda movie.

So maybe Pete Fletzer ought to take Reylos to task for attacking “old incel dude bros” just because Boba Fett is appearing in The Mandalorian. Because as the documented evidence shows, it’s idiot SJWs who spend their energy hating people for not liking the same thing as you. Routinely.

You can watch the whole podcast here: