The most that uneducated SJWs understand about the Nazis, is that they are bad because they’ve been depicted as villains in movies, video games, and comic books.  Every SJW currently sees themselves as Captain America, or Hellboy, or Indiana Jones, in a Walter Mitty-like fashion.

The fact that the actual, historical Nazis were defeated in Germany 74 years ago by men who were far braver and bolder than any blue-haired SJW could ever hope to be, has no possibility of ever penetrating into their pea-brains.  Real historical understanding has no place within the SJW hive mind. Uneducated SJWs such as Mur Lafferty and Chuck Wendig have no clue that it is they themselves who more closely resemble the real Nazis of actual history.

Take for instance Solo novelist Mur Lafferty and her bigotry against Christians, in which she insinuates that Christians treat people like animals:

So they present others as not people, but animals. You don’t need to worry about those silly Christian rules to do unto others – they’re not other humans. They’re animals. So it’s cool. 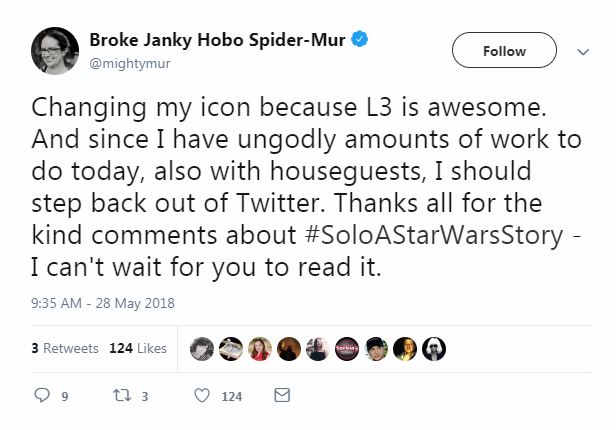 Compare and contrast Mur Lafferty’s statement with that of Adolf Hitler:

“It took fourteen centuries for Christianity to reach the peak of savagery and stupidity.”

“One cannot succeed in conceiving how much cruelty, ignominy and falsehood the intrusion of Christianity has spelt for this world of ours.”

SJWs will respond that Hitler claimed to be a Christian and spoke highly of them to speeches for the masses, but that’s because Hitler was dumbing down his speeches and customizing them to appeal to what he felt was the lowest element in society.

“All propaganda must be popular and its intellectual level must be adjusted to the most limited intelligence among those it is addressed to. Consequently, the greater the mass it is intended to reach, the lower its purely intellectual level will have to be.”

Uncanny how closely these Star Wars novelists’s propaganda match Adolf Hitler’s philosophy. So we can reasonably surmise why it might be that Disney Star Wars is now so dumb, while it is simultaneously so popular among the SJW “ignorati”.

With that as a backdrop, a Twitter user named Dataracer has posted an amusing edit of Chuck Wendig, Mur Lafferty, along with their SJW comrade Matt Wallace, pontificating upon their movie/video game/comic book understanding of the Nazis, during Mighty Mur’s podcast, Ditch Diggers.  You’ll have to click on the tweet to play the media.

Chuck and friends talk about their love for the #TheFandomMenace! pic.twitter.com/a667KB51mn

It really is a “must listen”

Maybe Chuck and Mur missed out on their true calling.  Maybe everyone would be better off if these “creators” were actually digging ditches instead.