Readers of my blog may recall speculation that The Mandalorian would turn out to be Cobb Vanth, a character created by Chuck Wendig and featuring in his awful Star Wars books. 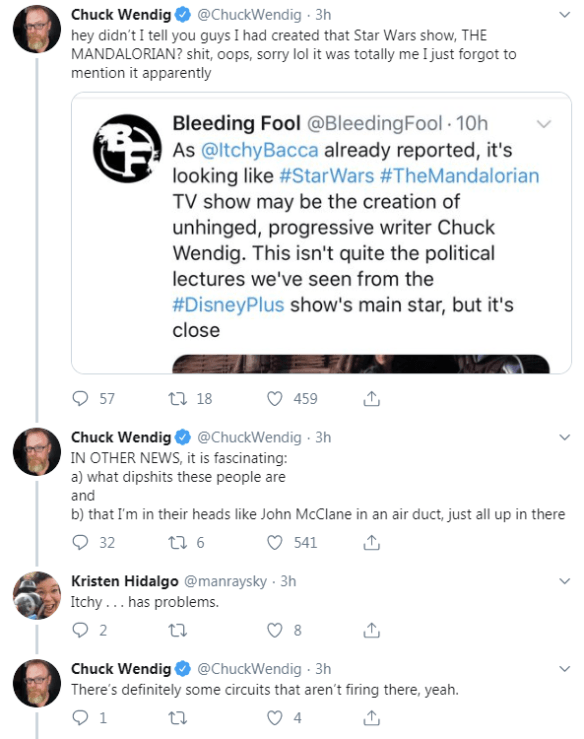 The title character is not Cobb Vanth. But it appears that the character played by Timothy Olyphant who was recently announced as being cast, will be playing Cobb Vanth according to Film Slash:

Our sources have confirmed to us that Olyphant filmed scenes wearing Boba Fett’s Mandalorian armor for the upcoming second season of The Mandalorian. That might sound confusing because earlier this month it was reported that Temuera Morrison, who originated the role of Jango Fett (Boba’s clone father), had been cast as Boba Fett.

If Morrison is playing the role of Boba Fett, then Timothy Olyphant is playing an enigmatic character named Cobb Vanth. Introduced in Chuck Wendig’s Aftermath book series, Vanth is the self-appointed sheriff of the Tatooine-based settlement Freetown. He wears a mysterious set of Mandalorian armor that was acquired from Jawas who scavenged the wreckage of Jabba the Hutt’s sail barge shortly after the events of Return of the Jedi. As you may recall, that was the site of a battle where Boba Fett was thrown into the Sarlacc Pit on Tatooine’s Dune Sea. It’s assumed that the Mandalorian armor purchased by Vanth is none other than the infamous green armor formerly worn by one of the galaxy’s most notorious bounty hunters, Boba Fett.

Wendig has crawled out of this home.

The Fecal Phoenix rises from his proper place.

Here’s what we know about Chuck Wendig’s Cobb Vanth character:

The 30-year period between original and sequel trilogies is one that’s ripe for new material, especially after Lucasfilm decided to render the pre-Disney works non-canon back in 2014. Beginning in 1991 with Timothy Zahn’s Heir to the Empire, the Expanded Universe continued the post-Return of the Jedi era with an extensive series of novels and comics. That period has slowly been replaced with a new series of works, such as Chuck Wendig’s Aftermath trilogy (set a year after Return of the Jedi) and Delilah S. Dawson’s Phasma (set 26 years after Return of the Jedi).

Then we have this from Kervyn Cloete of criticalhit.net from back in October 2018:

Reading Favreau’s description of The Mandalorian, I immediately thought of Cobb Vanth. Most of you will probably be inserting your “WHO?” meme gifs here, and I can’t blame you as you would only know that name if you’ve read Chuck Wendig’s Aftermath books. A trilogy of novels that was the first official material set to fill in the 30-year gap between Return of the Jedi and The Force Awakens, Wendig’s novels are, simply put, not the best read. The most intriguing aspects of them actually happen in between the main story following a ragtag Rebel strike force, as Wendig introduced these random interludes that just touch briefly on some minor characters or situations throughout the galaxy.

From Screenrant back in October 2018:

Cobb Vanth has already been introduced into the Star Wars canon in Chuck Wendig’s Aftermath trilogy, and it sounds a lot like he’s about to star in his own show.

You could describe Vanth as a frontier lawman, one who just happens to don Mandalorian armor. Cobb Vanth tries to bring law and order to Freetown, a town found on the sandy, Outer Rim planet of Tatooine. Tatooine just happens to be one of the rumored “outer reaches of the galaxy” locations for the new series. It makes one wonder if Cobb Vanth is the character’s true Mandalorian identity.

From Fansided in October 2018:

In Aftermath, a former slave named Cobb Vanth acquires a chest of Mandalorian armor — described as “pocked and pitted and streaked with scars” — from a group of Jawas on Tatooine. The armor sounds like it matches that worn by famed Mandalorian bounty hunter Boba Fett, last seen being digested by a Sarlacc in Return of the Jedi, wouldn’t you say?

In the following two books, Vanth, wearing the Mandalorian armor and using a carbine rifle (the same weapon made famous by Boba Fett) helps defend a settlement on Tatooine called Freetown from a crime syndicate, styling himself a self-appointed lawman. Tatooine is located in the Outer Rim, which is definitely “in the outer reaches of the galaxy.” So as you can see, there’s a strong case to be made for Favreau telling Cobb Vanth’s story in his show.

Perhaps this news will embolden Chuck Wendig to engage in another round of telling his political opponents to throw themselves into woodchippers. Only time will tell.

The Abomination is Back: Tim Roth Discusses His Return to the MCU
Red / Yellow: Our Best Look Yet at Daredevil's Disney+ Costume
Get Woke... Disney's Stock Now One of Worst Performing of the Year
M-She-U: Marketing Superheroes to Women is What's Killing Marvel
Hypocritical Disney Openly Supports 'Don't Say Gay' in the Middle East
Star Wars: Andor Showrunner Explains Droid K-2SO's Absence from Prequel Series
Watch: Star Wars: Andor - This One May Have Promise