The other night I made a special appearance on Geek Gab to discuss my new mecha mil-SF book Combat Frame XSeed and its impending sequel. During the show, I was asked if I’d seen Star Wars Galaxy of Adventures. I hadn’t, because I know that Star Wars’ current owners secretly hate me. Doing some cursory research, I discovered that their hatred is no longer secret.

For those who don’t know, the concept behind Star Wars Galaxy of Adventures is that they take the original audio from the classic movies and dub it over low-quality animated reimaginings of those scenes. I expected the results to be inept, and those expectations were met. What I didn’t expect was the brazen, foaming-at-the-mouth misandry on full display in every frame.

You doubt me? Here’s a little comparison between three frames from the original Star Wars and the corresponding frames from Galaxy of Adventures.

In our first scene, Luke, Han, Chewie, and Leia are pinned down by stormtrooper fire in the Death Star cell block. Leia is questioning the wisdom of their plan. She’s about to take matters–and Luke’s blaster rifle–into her own hands. Note that her expression is frustrated with a touch of concern. But her body language is open, and she’s in dialogue with Han. Meanwhile, Luke cautiously peeks out from behind cover.

Here’s the corresponding scene from Galaxy of Adventures. This Leia, whom I will refer to as Fake Leia, isn’t just frustrated. She’s livid with anger. She’s also not facing Han, but glowering at Luke’s back like she wants to plant a knife there. Note her closed, hunched posture, which makes her look more threatening. Here, Luke fiddles with his rifle in the middle of a firefight like moron. 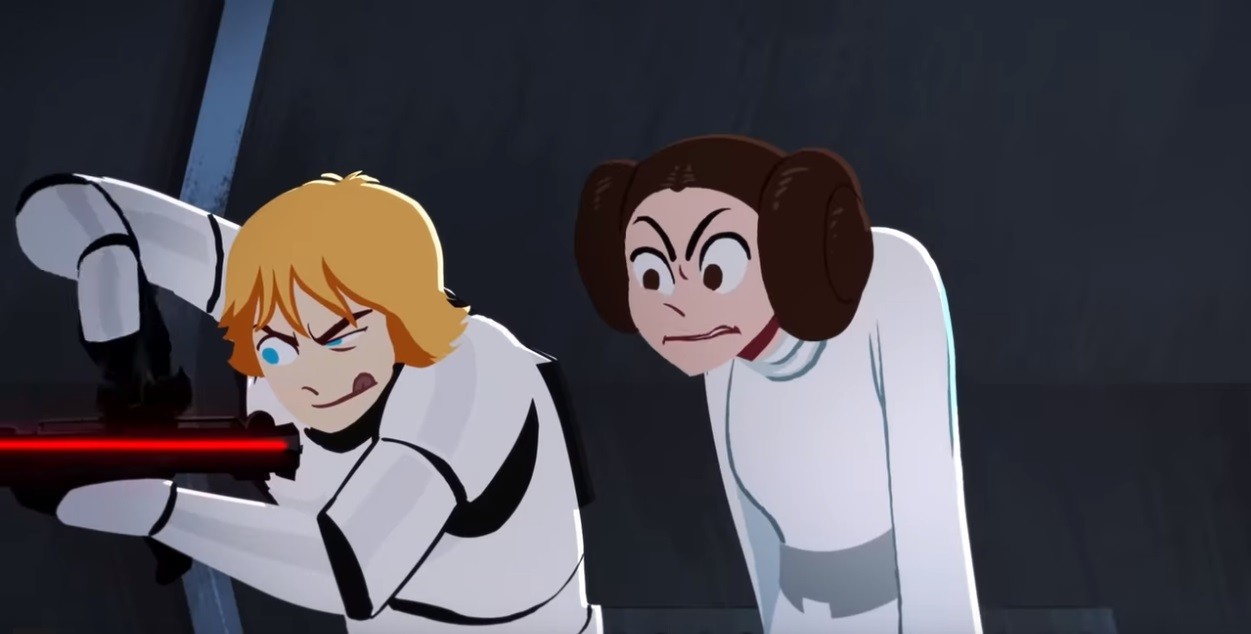 Back to A New Hope. Leia grabs Luke’s gun. Again, she’s facing the character she’s interacting with. Also, her face conveys determination with a bit of mischief.

In the “updated” version, Fake Leia violently seizes Luke’s gun from behind. Her eyebrows are at a severe diagonal, indicating anger. She’s looking at the blaster, not at Luke, and her teeth are bared in a scowl. Luke is utterly bewildered. 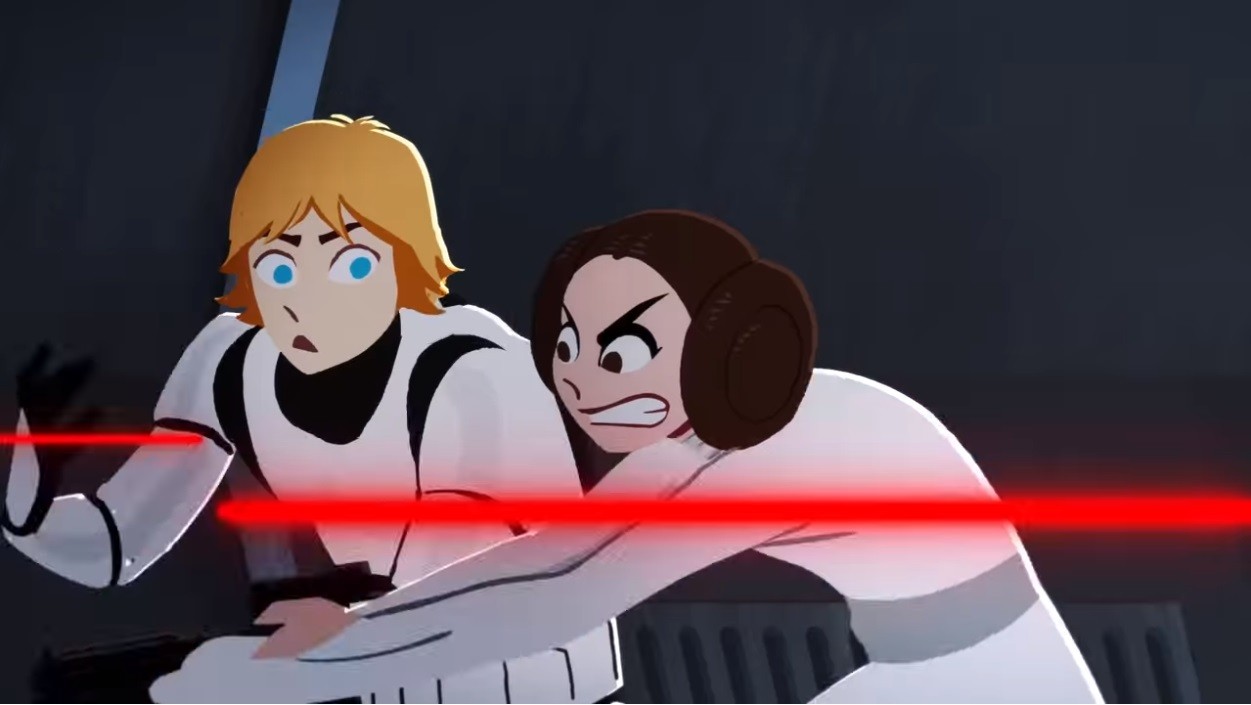 Here’s my visual closing argument. It’s the original “Tarzan swing” scene. Luke hands Leia his gun this time. He capably pays out his grapple line before the throw, and Leia gives him a kiss for good luck.

The Galaxy of Adventures version is the diametric opposite of the original. Luke is portrayed as so incompetent, he’s tangled himself up in his own line. Instead of being handed Luke’s gun and kissing him, Fake Leia grabs it and smacks him in the face. 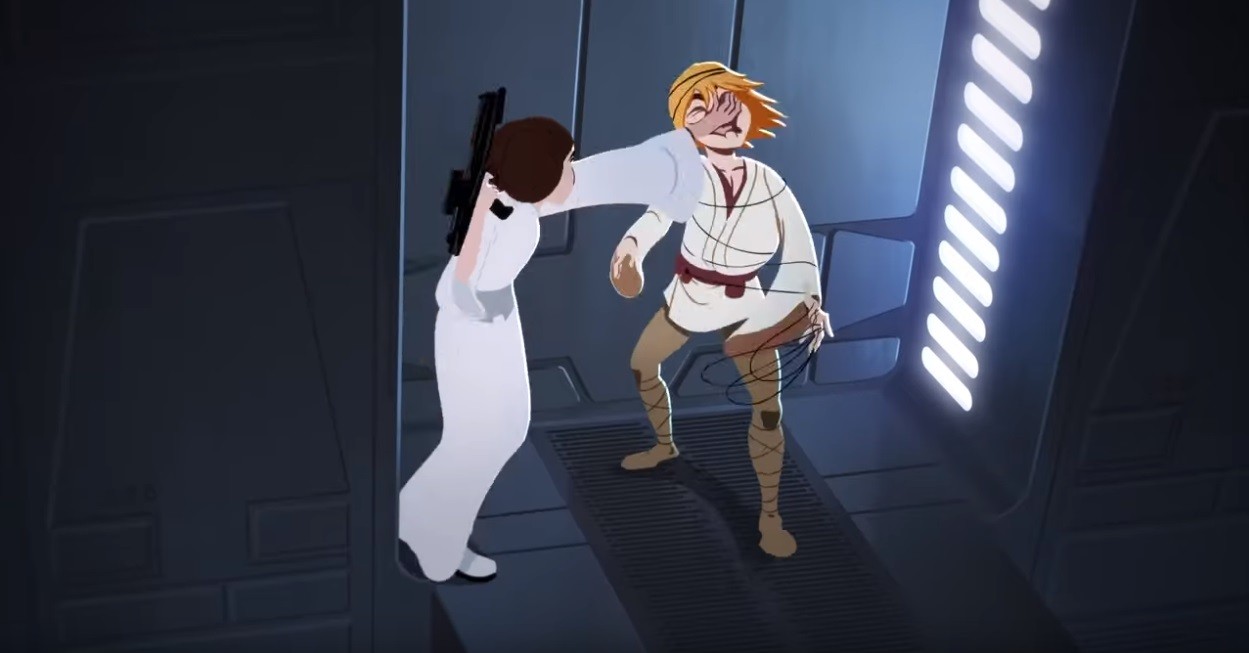 The whole video is like this. Fake Leia rages like being rescued is an affront to her dignity and her rescuers are affronts to her existence. At least she doesn’t mow them down like a psychopath, which can’t be said for the hapless stormtroopers.

The animators know what they’re doing. They’ve vandalized a classic to vent their irrational rage at the men and boys who were Star Wars’ core audience.

Disney hates you. Don’t give them money.

I just want to entertain you. Consider contributing your hard-earned entertainment budget to my Combat Frame XSeed: Coalition Year 40 project. Thanks to generous backers like you, we have met our initial goal, and the first stretch goal of CFXS series two trading cards has been unlocked! 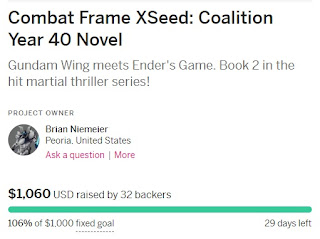 For prospective backers who’d rather not do business with Indiegogo, email me at soulcyclebooks@gmail.com, and we’ll make alternate payment arrangements.