“Star Trek: Discovery” has now entered its third season, one in which the eponymous vessel has been whisked 900 years into the future.

As I noted last year, after making use of CBS All Access’s free week trial I binge-watched STD’s first two seasons and came to the conclusion that it wasn’t all that bad. There were (are) many complaints that the show ignores and/or shreds Trek canon, but those complaints are hard to take seriously, especially given the last Trek series, “Enterprise.”

Speaking of canon, STD star Doug Jones recently noted the series’ jump to the future has freed the show’s writers in a big way:

We were playing ten years before the original series in the first two seasons. Now, we’ve jumped way ahead of all of the series. We started having to adhere to canon and to make sure that everything we were doing didn’t affect later series and decisions and canon and storylines that have already been filmed and already played. We had to fit in with that. Now, they’ve jumped ahead to where the writers have freedom to create from the ground up.

Jones added that STD’s writers “are able to create more creatures, re-introduce old species, and shift the dynamics between existing civilizations in a way they couldn’t in the first 2 seasons.” 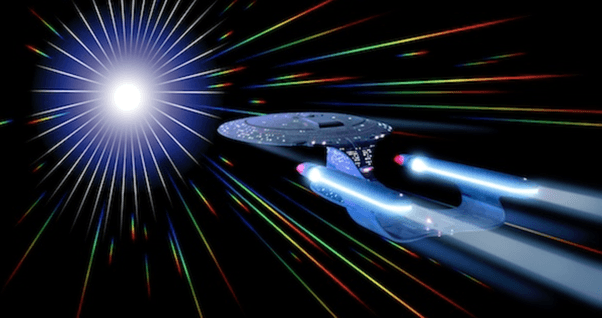 This is fine, of course; it’s certainly a lot better than writers at Marvel Comics simply giving the middle finger to what comics’ call “continuity.” What doesn’t make a lot of sense, at least this early in the season, is the premise of this Trek future: The key feature of the Alpha and Beta quadrants’ main power source, dilithium, is now exceedingly rare, and has resulted in a fractured Federation.

What’s more, something called “The Burn” laid dormant all dilithium in Starfleet vessel warp cores, thus resulting in their destruction. (For a refresher, dilithium is the element which regulates the matter-anti-matter reaction in Starfleet ships’ warp drives.)

OK, so the show’s writers came up with an allegedly cool plot device to explain the demise of “the most remarkable institution ever conceived.” But … was anyone else like me upon reading this premise and immediately thinking “Hey — 700 years after Discovery’s disappearance and the Federation is still using warp drives (and as such, dilithium)??” This would be akin to us in 2020 still using wind to power our means of transportation.

Even during the Federation’s heyday from the Discovery/TOS era through the Next Generation, alternatives to warp drive clearly presented themselves. For example, in TNG’s “The Nth Degree” Lt. Barclay (below) is altered by an alien probe and gifted with enhanced intelligence. He uses his gray matter to develop a means of traveling tens of thousands of light-years in only a matter of seconds, and takes the Enterprise to the center of the galaxy. Although Barclay is returned to normal after the journey, certainly there would be a record of exactly what he did that Starfleet could take advantage of. (Not to mention, at the end of that episode Picard notes in his log that the Enterprise spent 10 days with the aliens who had altered Barclay for an “exchange of knowledge.”)

Lt. Barclay is the computer

Further, given that Seven of Nine returned to Earth with the crew of Voyager in that series’ finale, why wouldn’t she share knowledge acquired during her days as a Borg drone such as how to create and use transwarp conduits?

Speaking of “Voyager,” another faster-than-warp technology was touched upon in that series, that of a “geodesic fold.” At the time it proved impractical as there was no means to protect living tissue from the radiation associated with it. But in 700 years’ time … ?

And dare I bring up the “Voyager” episode “Threshold” in which the ship’s shuttle broke warp 10?

Staying with the TNG/DS9/Voyager timeframe, there’s also the Romulans’ use of forced quantum singularities as starship power sources. Yes, they had their drawbacks in the then-current Trek timeline (like not allowing vessels to reach the same warp speeds as Federation ships), but, again, would not refinements and enhancements take place over 700 years’ time?

There are many more examples, of course, and doesn’t take into account super-high tech discovered in the standard Trek timeframe which could alleviate a civilization-altering event such as dilithium disappearing — like the Guardian of Forever from the classic TOS episode “The City on the Edge of Forever.”

Maybe, just maybe, the explanation for all this will end up making sense as “Discovery” season 3 pans out, but I’m not getting my hopes up.