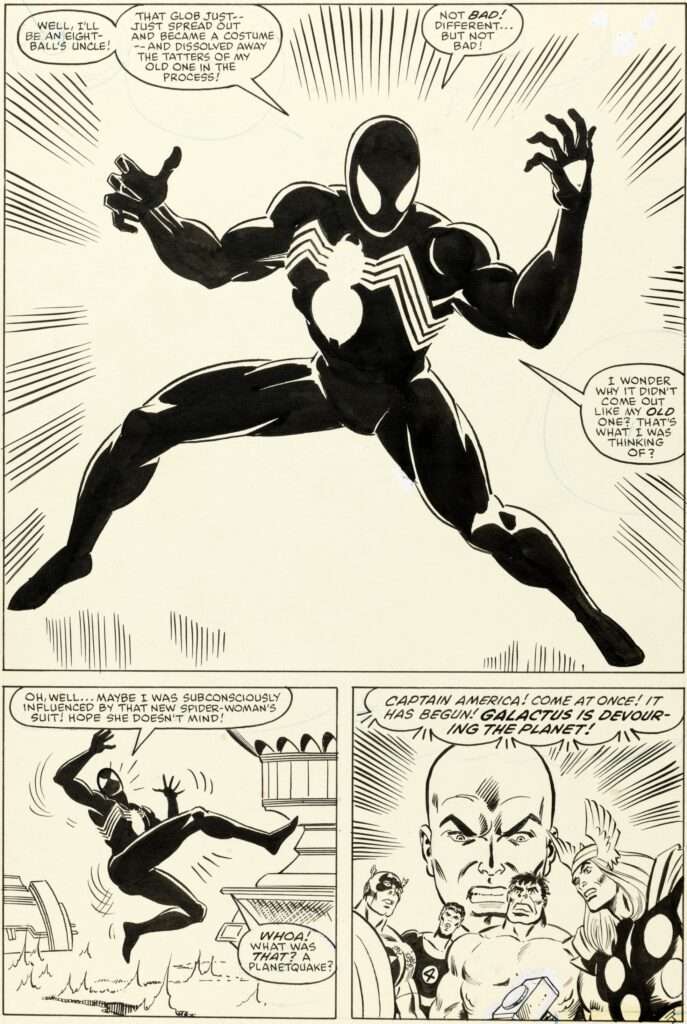 France 24 says a single page from a Spider-Man issue has raked in millions at an auction:

A single page of original artwork from an acclaimed 1984 comic featuring Spider-Man sold for a record $3.36 million in the United States on Thursday, making the webslinger the world’s mightiest auction superhero.

The page features the first appearance of Spidey’s black symbiote suit that would later lead to the creation of anti-hero Venom in artwork by Mike Zeck from Marvel Super Heroes Secret Wars no. 8.

[…] The previous record for a single page of artwork from the interior of an American comic book was a frame showing the first image of Wolverine in a 1974 issue of “The Incredible Hulk”. The page sold for $657,250.

On the surface, that may not sound as ludicrous as buying a whole pamphlet issue for millions. But, what if turns out whoever bought this original art page is yet another speculator who’s got no intention of putting it on display at a museum/gallery, and merely intends to lock it away in a vault for ages to come? What’s the point of that? This is another reason why all this artwork purchasing is a colossal joke. Though it’s certainly laughable when there’s artists out there drawing exclusive variant covers who have no complaints when their art only ends up shut away in safes to gather dust, all in hopes it’ll actually be valuable for millions one day. Alas, it’s not so simple, and a terrible shame how the medium’s been terribly exploited for artwork that doesn’t get put to use for the right reasons.

As I may have argued before, comics should be bought foremost for reading, and when it comes to the artwork, it should be displayed in museums and galleries, not locked inside vaults. Otherwise, it only prolongs the speculator farce the medium’s fallen victim to.