Around 2010, the political activist group known as the Tea Party was gaining traction.  Democrat activists and other social justice warriors didn’t like that very much.  So in typical SJW fashion, they organized their activists to infiltrate the Tea Party, and pose as racist right-wingers in order to prove a point that didn’t exist.  This was roughly about the time that hate hoax lists started to be curated.  But another tactic that SJWs tried, was attempting to create a kind of anti-matter opposition to the Tea Party, even though they were already routinely engaged in activist antics anyway.  And so, the hilarious Coffee Party was born as a reaction:

Enter the dingleberry from Den of Nerds.

In the video below, this gentleman spends a good amount of time demonstrating why safe spaces at the university are such a bad idea.  They leave the student susceptible to involuntary tantrums in the face of critical and sometimes necessary negative commentary.  He then goes on to describe how horrible some fan divide is, as though division itself is a problem because everyone needs to have the same opinions.  “Unity.”  He weirdly complains that negative commentators don’t allow others to enjoy Star Wars, as though negative comments somehow prevent people from enjoying anything they want.  It’s the usual stuff.

But then he talks about how he actually wrote a “proposal” for an alternative to the Fandom Menace.  “With more respect, and less toxicity.”  He calls it the “Grey Order.” Sound anything like the Coffee Party?  Yet this yutz thinks he’s blazing a trail.  Even worse, like most SJWs, he’s under the delusion that opinions somehow need to be governed.  The thought of individuals expressing their thoughts in any way they please without regard to some imaginary collective, collaborative, cooperative, community, never crosses his mind.

The amusing idiocy starts at around the 5:30 mark:

I Have Joined The Star Wars Group The Fandom Menace...

Maybe he and other creators of the same mind should reach out to Jason Ward’s MakingStarWars.net podcast network. They too thought they were creating a fandom utopia until they started eating each other alive.  Metaphorically speaking of course.

The doofus then has the audacity to say that the members and “leaders” of the Fandom Menace have branded themselves into a negative corner.  Maybe this imbecile should spend some time reading the earlier entries of this blog, when the media was repeatedly branding the Fandom Menace as racist, sexist, misogynist, manbabies, etc.  Simply for daring to say that an awful movie sucked donkey balls.  Which of course it did.

How about if each individual expresses their opinions in any way they like?  How about if no one organizes any ridiculous fan groups in an attempt to govern opinions more to their liking?  And how about if idiot SJWs tolerate this, even if they don’t like it because it doesn’t give them any control over any narratives?

Because this isn’t about trying to create something more positive or civil.  It’s about attempting to regain control of the narrative.  Control that they have utterly lost.  After all, organization just isn’t needed for the expression of opinions.  That’s right, Den of Nerds.  Your governance of fandom is wholly unnecessary.

Because for me, The Fandom Menace stands for being able to like or dislike any form of entertainment, and be able to express those opinions without being attacked or insulted for doing so either way.

Hat tip to John Talks who commented on this silliness. 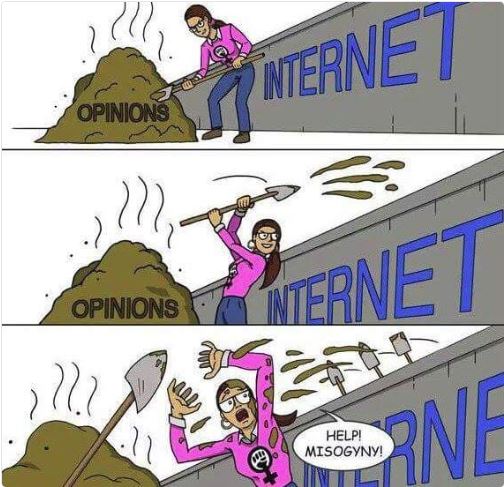