Solo: A Star Wars Story’s Failures Are All On Kathleen Kennedy

Estimates for “Solo: A Star Wars Story” are continuing to go lower and lower. Disney and Lucasfilm’s “Star Wars” prequel is now looking to make $100 million or less in nearly 4,400 North American theaters during its four-day holiday weekend debut. The Han Solo origin film’s three-day estimate currently hovers around $83 million. Internationally, it opened with a disappointing $65 million for a worldwide three-day weekend of $148 million.

Industry projections from less than a week ago, were putting it in the $340 million range. Now, with poor audience scores and lower attendance than anyone anticipated, Disney/Lucasfilm are actively promoting a Boba Fett film that’s at least a few years away. Not a strong show of confidence there.

John Nolte over at Big Hollywood places the blame squarely on the producer, Kathleen Kennedy. And he pulls no punches in his assessment:

Solo is not collapsing at this weekend’s domestic and international box office over some exotic disease known as Star Wars Fatigue. The idea that the American public is tired of Star Wars because The Last Jedi was released only five months ago, is a heaping-helping of anti-science rubbish.

Are people actually going with that?

In a country that, for decades, still tunes in countless times a week to gobble down reruns of various procedural shows (CSI, Law & Order, NCIS) that are indistinguishable from one another?

Americans never tire of anything. Look around, y’all, we hate to tire of stuff. From our cold dead hands will we let something go. We love sameness, the comfort of predictability, the sense that the earth has stopped turning, which means time isn’t passing, which means we are not going to die. Good grief, we are so scared of dying, so terrified of change, that sometime in June of 1995 we froze our clothes, hair, and decorating styles in amber.

Fatigue? From Americans? Sorry, no. The only way to get us to move along is if it sucks … which brings me back to Star Wars.

How badly is Solo under-performing?

Keeping in mind that the trades reporting on Solo’s box office tend to suck up to the studios by making things sound better than they really are — and things still look bad. Over this four-day Memorial Day weekend, Solo is belly-flopping at right around $114 million. Solo’s three-day take (Friday, Saturday, Sunday) is $93 million.

When you figure in for inflation, even the dreaded prequels (that opened on a lot fewer screens) will out-perform Solo.

Solo opened on a whopping 4400 screens.

For an even clearer perspective, on its opening Friday, Rogue One earned $71 million. Solomade about half that, $36.5 million.

Internationally, that magical place where most domestic box office bombs go to thrive, Solo is even doing worse. In 43 markets, over two whole days, Solo made a paltry $11.4 million.

So what is happening? Why such a collapse?

Kathleen Kennedy is the 65-year-old producer in charge of the Star Wars franchise. She is also a committed left-wing social justice warrior and feminist who is using the Star Warsfranchise to push her obnoxious agenda.

Kennedy undoubtedly believed that with such a beloved and iconic property, she was bulletproof; that she could be as strident and obnoxious as she pleased, and we dumbass Americans would still slavishly get the line because spaceships and laser-guns are cool ‘n stuff.

She was wrong, and The Last Jedi was the beginning of the end. It under-preformed big-time at the box office and its overbearing political moments were not only eye-rollingly awful, they damaged the overall story while tainting the entire franchise. Kennedy has placed her dumb agenda over the storytelling, and the result was especially awful in Last Jedi, like that two-hour chase that went nowhere. Worse still, was Kennedy’s decision to dumb down Oscar Issac’s Poe Dameron into a sexist caveman when he is, by far, the most charismatic new character in the new trilogy.

Solo also has its SJW moments. Who doesn’t love watching a five-foot girl who weighs in at about 85 pounds kicking the ass of a grown man? Then there is the feminist droid always harping about equal rights (thankfully, she is killed off quickly). Finally, we are hit with the news that the iconic Lando Calrissian is a “pansexual,” and there are a couple moments in Solo where you are given the impression that includes sex with feminist droids.

Kathleen Kennedy is killing the Star Wars franchise because she is so drastically changing it (remember what I said above about Americans not liking change?). What used to be escapist and mythical, what was once wondrous and ennobling of the human spirit, is now pedantic, preachy, and small-minded.

Kathleen Kennedy is such a bad storyteller, so heavy-handed, so selfish, so narcissistic, so wrong, so divisive, so out of touch, that a Star Wars movie — a Star Wars movie, y’all –– will probably lose money.

Decades of goodwill have been squandered, the golden goose has been made constipated, and all because of the one thing true constant in America, that thing that will never change: liberals eventually ruin everything. 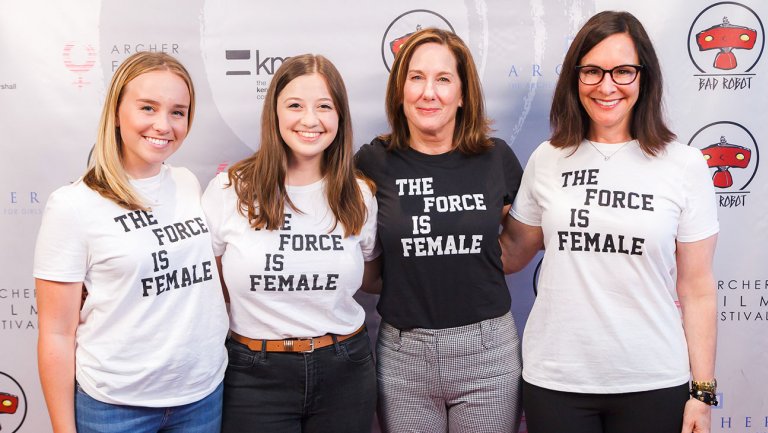 The whole thing is worth reading. Will this lead to Kennedy’s firing? That doesn’t seem likely, so we can expect Episode IX to continue the downward spiral of a once-beloved franchise.