Puzzling out why Wokesters cannot tell a story, despite being in the story-telling business, and despite showing the ability, when not Wokestering, to do it, has been a personal quest, if not pet peeve, of mine for some time. I simply cannot concoct a theory to explain it, no matter how many times I try.

Let us give Critical Drinker, that wonder of inebriated Scottish film criticism, a try.

She-Hulk - A Lesson In Terrible Writing

Allow me also to repeat at length a remark by Ace of Spades recommending this same clip. The words below are his:

Gary from Nerdrotic read what, if I remember right, were “the rules” that a Hollywood source gave to him, regarding how to properly “represent” women in movies now.

One of the key rules was: No woman can ever learn anything from a man, ever.

Men have nothing of use to ever teach a woman. So in any show or movie where a man is naturally a more experienced mentor, as in She-Hulk, the female character has to act like a brat, reject everything he says, and show that she doesn’t need any of his wisdom because she already knows it all and is already better at everything. Which is exactly what happens in She-Hulk.

This is why Kathleen Kennedy was determined to kill Luke off in The Last Jedi, even after Carrie Fisher died — she could not stand the idea that a man would actually teach Rey the ways of the Force. Only a woman can teach a woman, even if you have to generate that woman from old footage and CGI.

Oh, and also, women must always be shown to be stronger, more capable, smarter, etc. than men and always beat men in every contest, from an argument to a physical fight.

One thing that doesn’t seem to be a rule but which is just something that happens in every Girl Power “entertainment:” the female characters are never challenged and never defeated and always sleepwalk through their supposed challenges and torments easily besting everyone. This happens in the comic books, like “Captain Marvel.” It happens in the movies — like, Captain Marvel, again. It just seems to be that when women sit down to imagine what “heroic fiction” is, they imagine it as just a hero beating the stuffings out of one easily-dispatched tomato can after another. They just seem to crave a very simple empowerment fantasy in which the empowerment is… Omni-Powerment. This makes for very, very boring “entertainment,” which is why all these ventures fail and lose money. (Or make money only because Marvel lies and pretends you have to see Captain Marvel to understand the conclusion of the Thanos saga.)

Yet they keep doing the same thing every single time.

Huh, maybe if these inexperienced would-be female writers of heroic fiction sat down with experienced older male writers of heroic fiction, they could learn the rules of the hero’s journey and learn that the hero has to start off by failing and being bested by his nemesis early, at least once and sometimes several times. But of course — no woman can ever learn anything from a man.

For the record, the reason why I venture no opinion is that I have not seen, and have no intention ever to see, the show being discussed.

I have no intention ever to see the show being discussed precisely because I am a fan of the John Byrne run on SHE HULK in the comics, back when comics were good, and what Byrne did was a tightrope-balancing act of cheesecake, comedy, superheroics, and breaking the fourth wall to wink at the audience. His work was also drenched in call-backs, cameos, and little bits of nostalgic fan service. It was not long-running, nor a great success, but it was likeable.

The previous run was meant to be serious, and Jennifer, like her cousin, both lost her wits and memory when she transformed into the monster. Under the pen of John Byrne, she turned into a curvy pinup model, big and green, becoming sassy and staying that way. 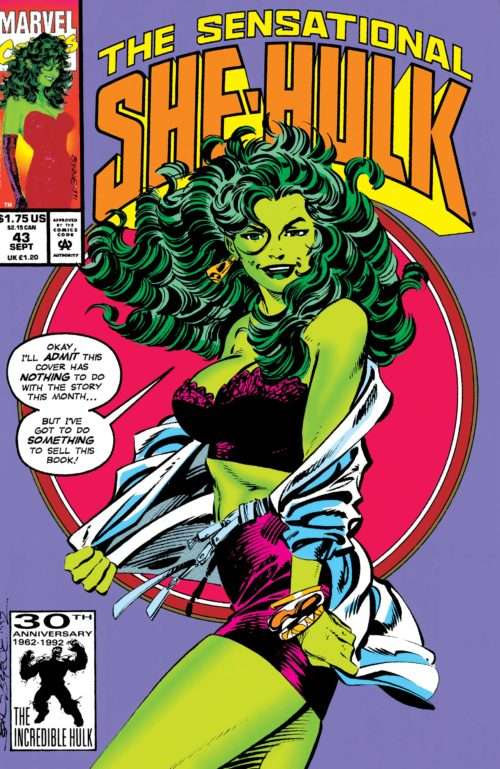 As a fan of the John Byrne run in the comics (see above), I decided not to attempt to watch. I am not inclined to believe the quirky humor and charm, nor the cheesecake would be reflected in any version postmodern fourth-wave corporate feminism could possibly produce. Promotional materials (see below) in nowise tempted me to doubt that inclination. 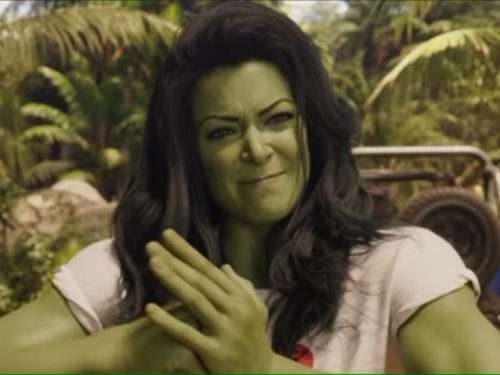 An argument broke out in the comments section which regrettably  resulting in high drama and hurt feelings. Regardless, the points proposed were sober: namely that the live action version should not be criticized for a lapse in drama, if it served a comedic purpose successfully; nor if the lapse were excused due to lack of run-time or resources; nor if it were addressed in a later episode.

Finally, a point was also made that no one who had not seen the episode should venture an opinion.

With this last point I wholly agree. For that reason, I myself voiced no opinion on the merits of the show, nor will I. To judge prior to seeing evidence is seen is rightly called prejudice, and this is a shortcoming rigorous thought avoids.

Nonetheless, my curiosity was piqued as to what opinions others, who had seen the show, would venture. In a very unscientific and very lax review of the reviews of others, I detect a general pattern of discontent.

For any reader curious about my curiosity wishing to review my review of reviews, I here gather a list.

(As ever, language warnings for nearly all these entries. We live in vulgar times, and vulgarisms are a commonplace as street dropping in Dem cities.)

1. This is from Mr. Reagan, a political and cultural commentator whom I admire and follow. His title: She Hulk is the Worst Show I’ve Ever Seen.

She Hulk is The Worst Show I've Ever Seen

His comment is noteworthy in that he says “if you only looked at YouTube titles about this show, you’d probably believe this show somehow gives you gamma radiation just from watching it.” Since I am here listing all these Youtube titles, I concur.

The failure of feminist Hollywood

Miss Watson appeals to my silly sense of humor. I may watch her more.

5. JLongbone: She-Hulk: The WORST of Phase 4

She-Hulk: The WORST of Phase 4

6. Lewis Films: I Fell Out of Love with the MCU

I Fell Out of Love with the MCU | Video Essay

7. It’s a Gundam: She Hulk EP2: How to write a Comedy without the laughs

She Hulk EP2: How to write a Comedy without the laughs

12. Movie Overload: Why The MCU is Falling Apart

Why The MCU is Falling Apart | Video Essay

13. Dave Cullen: She-Hulk: WokeFest: The Fall of the MCU

Dave Cullen is a man whose insightful commentary I particularly admire. If you are unfamiliar with him, he is worth seeking out. Alas, in this particular essay, he salutes the false idols of diversity and inclusion, indicating a lapse in his thinking.

She-Hulk: WokeFest: The Fall of the MCU

This baker’s dozen is more material than one need watch, nor am I suggesting any of my dear readers waste his time doing so. Nonetheless, even random samples of a few should adumbrate the general tone of the criticisms.

Some of these are reviewers I know and follow, but others are strangers to me, whom I include for reasons of completeness, in case they had a good word to say about the show.

While this does not prove in any logical fashion that a person of my taste will dislike the show, the hearsay is sufficient to quell my curiosity.

Indeed, this line of dialog, almost by itself, is sufficient to quell my curiosity:

“I control my anger infinitely better than you!!” Jennifer screamed.