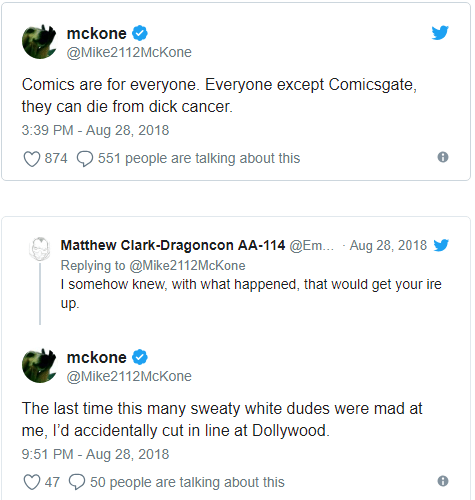 It’s been a few weeks since Mike McKone posted his stunningly repellent attack on Comicsgate at the expense of cancer victims. Now, he retweeted a post by another artist/writer, Mike Norton, seen below in a screencap so you see who RT’d it at the top left, which hints McKone has no regrets to show for his entirely avoidable scandal: 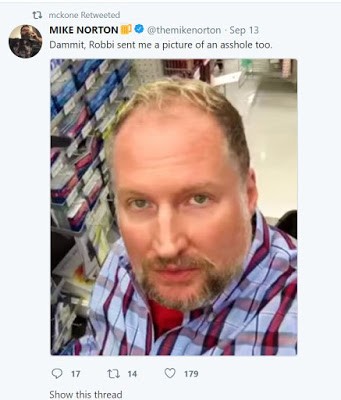 So now Norton for starters is signaling he agrees with Robbi Rodriguez’s own reprehensible postings about Ethan Van Sciver, and McKone’s endorsing his approach in turn by retweeting it. Sigh…this is a true head-shaker. And if Norton’s a webcomics specialist, it doesn’t make things look good for the webcomics medium either. I’m guessing, based on the above, that McKone’s not interested in donating to the charity fund Van Sciver launched for aiding cancer victims in the UK? Well if not, that just compounds the low perception McKone’s now left of himself in the minds of the audience.

And McKone’s not the only one who’s condoned this disturbing pattern of behavior. There’s also Mike Deodato, who posted:

Good grief. Until recently, I might’ve thought Deodato was one of the more decent minded artists out there. Now, he’s added his name to the growing list of irrational, badly educated “creators” who’re making ill-informed, vulgar attacks on anyone who dares embrace a consumer revolution demanding better quality and such. (Update: on which note, he did write another post where he attacked Comicsgate.) Say, do I notice all 3 men have the first name Mike? I think this’ll have to be known as a case of “three Mikes and you’re out”.

At least now we know how morally bankrupt McKone and company are, and can avoid a lot of their products due to the public relation fiascoes they’re producing on social media. They shouldn’t even be on social media if it takes away time from work, and family relations, to say nothing of common sense and constructive dissent. If they want to apologize for how poor their conduct’s been, they can donate to the medical charity funds Van Sciver’s launched.

But I’ve got a sad feeling it’s unlikely they ever will.  Looks like DC’s social media policy was a complete farce.