Seriously, Peter Jackson’s Lord of the Rings is Utterly Awful 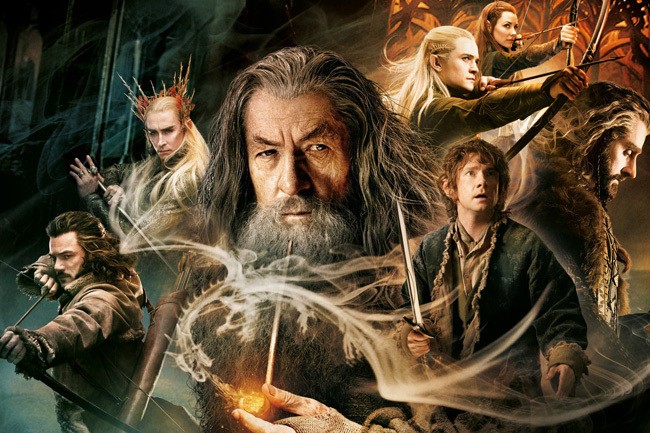 I’ve noticed that there are some sadly misguided individuals out there who think the Lord of the Rings movies are actually good.  This post will dispel that unfortunate delusion.

Now some of you might think I take Lord of the Rings a little too seriously, but considering I wrote a four-book series to work out my nerd rage over the Star Wars prequels, this is a pretty restrained response for me. 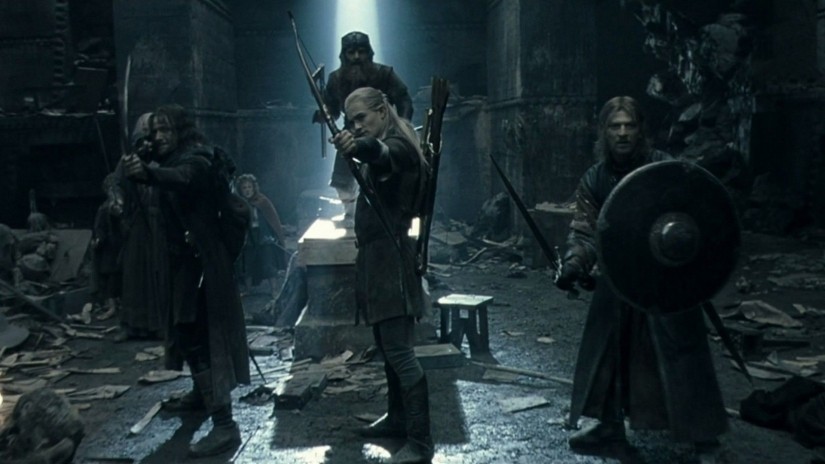 Characters, or Why Is Everyone in this Movie Chaotic Evil?

I will be blunt: Peter Jackson’s characters belong on an ’80s Saturday morning cartoon show. He systematically cut out just about every piece of character development in the books. Merry and Pippin are useless buffoons at the start and stay that way. Gimli is a vehicle for cheap gags. Boromir never at any point struggles with desire for the Ring but openly lusts after it from his first scene. Legolas is Luke Skywalker in tights, as demonstrated by his single-handedly downing a war elephant.

And check out Arwen!  Is she a badass or what?   You know the whole “girl power” thing of being a princess royal AND a kick-butt warrior is totally unique and has never been done before.

Even the minor characters are botched.  Denethor has stringy hair (a recurring theme in Jackson’s vision of Middle Earth), frowns a lot and is a sloppy eater. Unlike the character in the book, he isn’t noble or intelligent, just a doofus who orders his sole surviving son to lead a suicide mission.

What I’m driving at is that by making everyone flat, no one can grow. When Boromir falls for the Ring, everyone in the audience saw it coming from a mile away. When Denethor goes suicidal, there’s no surprise because he’s a raving madman from the moment we meet him.

Those characters Jackson didn’t reduce to cartoons, he turned into evil bastards.

Consider Aragorn.  In Jackson’s version, he’s a total cad and a thug.  Despite being engaged to Elvish royalty, he decides to start flirting with Eowyn, only to dump her when his future father-in-law shows up.  This in turn convinces Eowyn to seek suicide-by-combat.   Oh, and how about this exemplar of nobility murdering an emissary in cold blood during a parley?   What a hero.

Jackson does a real number on Frodo too, making him faithless to Sam and stupid enough to think that Gollum of all people is more trustworthy.   Note that Frodo only comes to regret his decision after Sam saves his life and he’s completely dependent on him.  He accepts Sam back into his friendship because he has no other option.

The upshot is that in Jackson’s vision, the most noble characters do the right thing because they’re compelled by circumstances or because they think it’s in their rational self-interest.  And they never pass up an opportunity to kill someone.

Plot Holes the Size of Moria

One of the things that sets Lord of the Rings apart is its intricate plot structure, which not only builds tension as it progresses, but adheres to real-world markers of time and distance. Even the lunar cycle is represented.The book starts small and gradually builds in scope and tension. Peter Jackson labors mightily to destroy both the cohesion and the tension and succeeds brilliantly.

Again, it’s not clear if Jackson understood the plot and hated it, or couldn’t figure out why it was important that things happen in the proper order. Given that he had only a fixed amount of time to tell a story, it boggles the mind that he felt it necessary create entirely new (and useless) scenes such as Tomb Raider-like jumping games in Moria, Aragorn whizzing over a cliff in Rohan, and the origin story of orcs.

LOTR The Fellowship of the Ring - The Fighting Uruk-hai

This scene is completely unnecessary.  We already know orcs are bad guys, but I guess Jackson wants everyone to know he has an encyclopedia of Middle Earth on his bookshelf.  The screen time and resources were completely wasted.

All of this comes to a head the sequence involving the Siege of Gondor and the Battle of the Pelannor Fields.

In the book, this is a time of intense activity and tension. The western Fellowship is split up three different ways and each group has a task at hand. All roads are leading to Minas Tirith and the decisive battle of the age.

Yet none of this tension was shown.  In Jackson’s version, no effort has been made to defend the city at all.  They haven’t even requested aid!  The war beacons are lit only after a goofy action sequence that makes everything that is happening feel totally random.

Instead of resorting to cheap comedy, Jackson should have shown the preparations for war in Minas Tirith: walls being repaired, food under rationing, the evacuation of the non-combatants and the arrival of the out companies from the far corners of the realm.  Again, this isn’t about being true to the book, it’s about having the plot make sense and taking the movie seriously.

But the biggest miss of all is the crisis moment of the siege: Gandalf vs the Witch-King. A moment immortalized in numberless drawings and paintings. 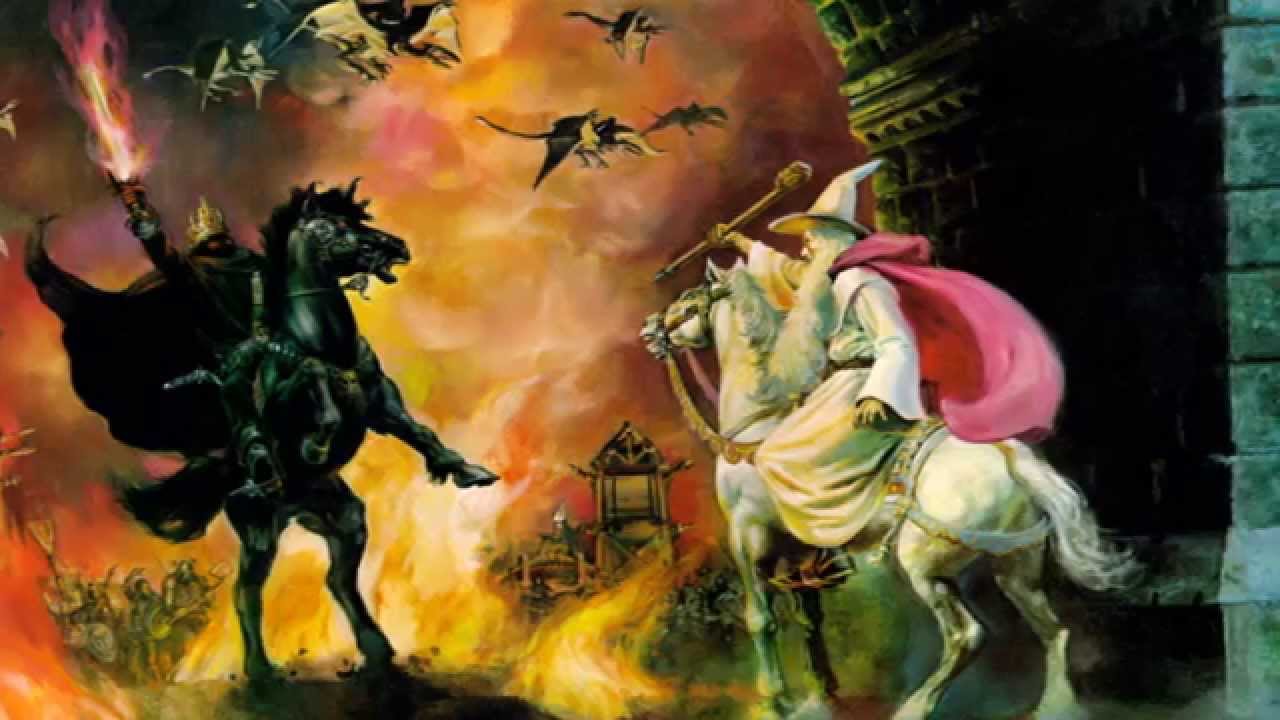 Because not everyone has read the books, I’m going to cite the actual text to make the contrast clear.  After the gate falls:

All save one.  There waiting, silent and still in the space before the Gate, sat Gandalf upon Shadowfax:  Shadowfax, who alone among the free horses of the earth endured the terror, unmoving, steadfast as a graven image in Rath Dinen.

“You cannot enter here,” said Gandalf, and the huge shadow halted.  “Go back to the abyss prepared for you!  Go back!  Fall into the nothingness that awaits you and your Master.  Go!”

The Black Rider flung back his hood, and behold! He had a kingly crown; and yet upon no head visible was it set.  The red fires shown between it and the mantled shoulders vast and dark.  From a mouth unseen there came a deadly laughter.

“Old fool!” he said.  “Old fool!  This is my hour.  Do you not know Death when you see it?  Dienow and curse in vain!”  And with that he lifted high his sword and flames ran down the blade.

Gandalf did not move.  And in that very moment, away behind in some courtyard of the City, a cock crowed.  Shrill and clear he crowed, recking nothing of wizardry or war, welcoming only the morning that in the sky far above the shadows of death was coming with the dawn.

And as if in answer there came from far away another note.  Horns, horns, horns.  In dark Mindolluin’s sides they dimly echoed.  Great horns of the North wildly blowing.  Rohan had come at last.

This is great stuff, beautifully written.  It strikes a powerful contrast – only moments before, all was violence and noise, but now shocking silence.

This is what we should have seen: Gandalf once again standing in the breach, this time defending a gate that no enemy had ever entered.  Instead, Jackson gives us another World of Warcraft fight sequence and then everyone runs to the second gate.  Only then does he have the one-on-one confrontation.

And then he botches that, too, by having the Witch-King break Gandalf’s staff.

In the heroic tradition which Tolkien is evoking, breaking a weapon means breaking the user as well.

We already saw earlier in the film what a significant event this is.

In Moria, Gandalf broke his own staff and sacrificed his life for the Fellowship while fighting the Balrog.   When Gandalf returned to life, he in turn broke Saruman’s staff, demonstrating Gandalf’s new power and symbolizing Saruman’s fall from grace.

But absolutely nothing happens after Gandalf’s staff is broken here.  Presumably he just grabs another one from the prop department.  The whole point of those earlier two episodes is now gone.

The subsequent battle is just as pointless.  The Rohirrim make a pretty charge and there’s lots of gore, but then Aragorn shows up with the undead Scrubbing Bubbles of Doom and renders everything that happened before moot.  If Rohan had been just a half an hour late, they would have taken no casualties.  Bad timing on their part.

To be fair, the series doesn’t start off badly, but that’s likely because Jackson simply copied the Ralph Bakshi animated version of the film from 1978.

You can say that these are mere details, but details matter.  I want to emphasize that the problem isn’t that the movie didn’t closely follow the book, but that the deviations render the movie incoherent and destroy the underlying theme of the work.

For example, the first Narnia movie took considerable liberties with the text but remained utterly true to author C.S. Lewis’ goal of creating a Christian allegory for children. The point is, this can be done, and it has been done.

When you strip away the elvish names and the medieval hardware, what you have is a series of superhero movies set in Middle Earth. There is no moment where the characters choose to talk rather than fight.  As noted above, the verbal confrontation between Gandalf and the Witch-King is turned into a boss fight.

The battles are big, noisy but hollow.    Extras die, the heroes cover themselves with gore, and we’re on the next CGI action sequence.  There’s sometimes a momentary pause for a sappy remembrance, and then we’re off to the next fight.

Also like superhero movies, the characters indulge in low comedy and completely out-of-place quips that wreck both the setting and the dramatic tension. Why focus on character development when you can pull Gimli’s beard or show Sam wielding a frying pan as weapon?  Jackson always goes for the cheap laugh.

These movies had the budget and subject to make them timeless classics, but they already feel dated, like a Michael Bay action flick from the ‘90s.

Last year I formed a family reading club and everyone read Lord of the Rings cover to cover. Afterwards, my two younger kids held a mini-film festival and watched the extended DVDs. Their derisive laughter was music to my ears and sometimes I’d pause outside the family room just to listen to them mock the films MST3K-style. 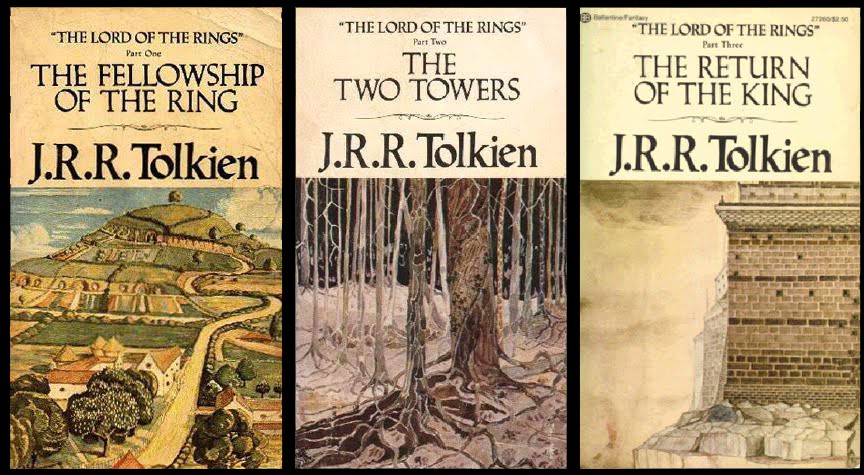 There will always be people who prefer spectacle to substance, sound and sensation to story, action to character or mood to emotion, and for those, these movies are great. But for more discerning critics, they represent an opportunity lost, and the marring of a great work of art.

Which, come to think of it, was also one of Tolkien’s themes, so maybe Jackson got something right after all. 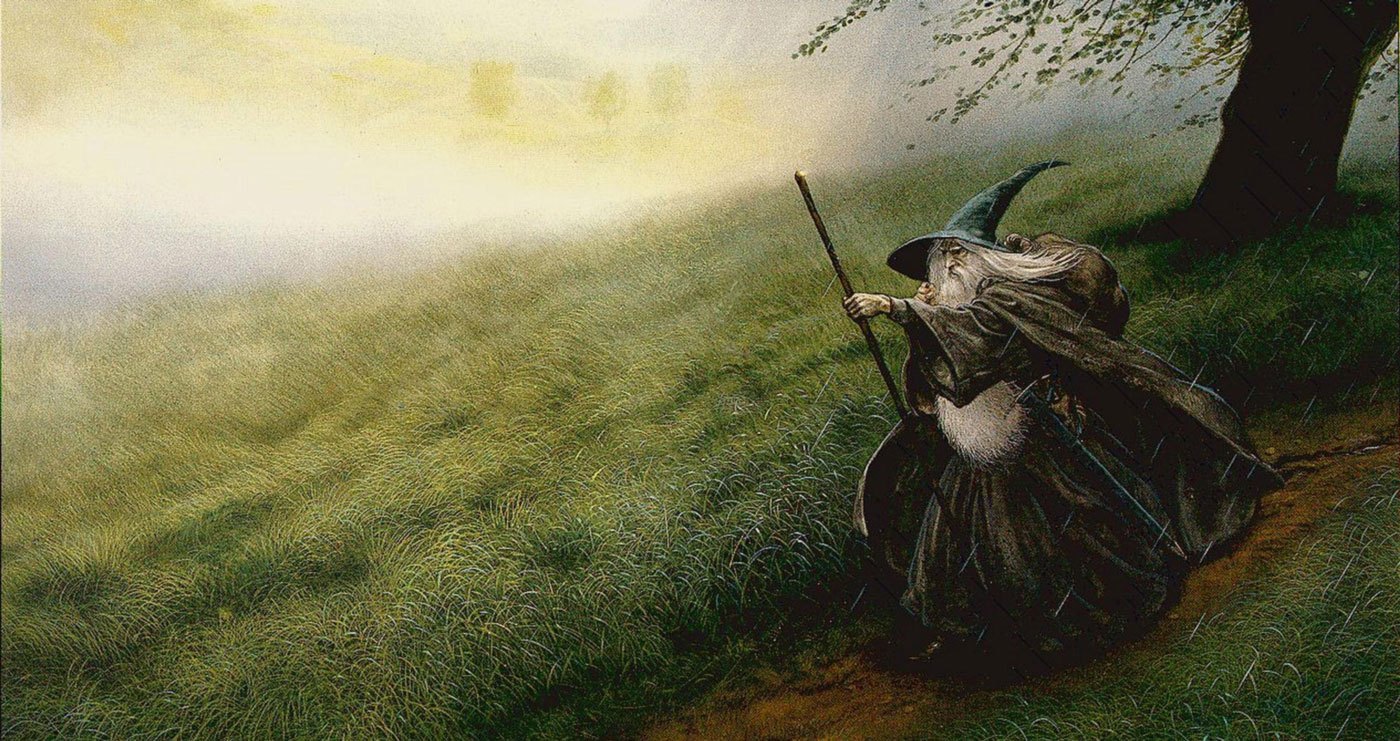 Mage Tower in World of Warcraft: What Beginners Need to Know
Are Men Better Women Than Women? The Eerily Prescient 'Tootsie'
Avatar 2 Passes $1.5B Globally: Becomes Biggest International Release of 2022
No - Die Hard is NOT a Christmas Movie
Was Disney Caught in the FTX Crypto Scandal & Can Apple Save Them?
Top Gun: Maverick Makes Current Movies Look Like the Trash They Are
Warner Bros. Launches NFT Platform for Lord of the Rings, Not Kidding