Now comes a piece from Mike Ryan at UPROXX, nearly 4 years after the release of The Force Awakens, entitled, For The Life Of Us We Can’t Figure Out What The First Order Wants In These New ‘Star Wars’ Movies.

In Mike’s article he writes:

A week ago I wrote a piece lamenting that, now, after two chapters in this Star Wars Sequel Trilogy, I still didn’t 100 percent know what the First Order and Resistance actually are. And, again, I understand what they are in a macro sense, but the minutia of both organizations are a bit … blurry. (And honestly, I expected to be inundated on social media with an endless barrage of, “Um, obviously it’s this,” but surprisingly most responses were more, “Yeah, we don’t really get it either.”)

Anyway, I’ve thought more about this.

So, of the two, the Resistance is a little easier to understand. Its best explanation for existence is something along the lines of, “It’s there to fight the First Order.” This is both a simple explanation but gets more complicated when we consider it only exists because of the First Order. And that’s a problem because it’s the First Order that doesn’t make a lot of sense. Or, at least, after two chapters, I have no idea what they want.

They want you to buy as much First Order merchandise, as we bought Empire merchandise.  That’s it.  Nothing else.

The Prequel Trilogy isn’t executed well, but its overall story is pretty interesting. Palpatine knows he can’t just fight the entire Republic and win, so instead he infiltrates the Republic as a senator, then becomes chancellor, then he guts the whole thing from the inside out, transforming it into the Galactic Empire. Instead of fighting “the government,” Palpatine collected enough power along the way to just become “the government.” Palpatine’s goal was pretty clear: he wanted to be in charge of the government and he succeeded.

That’s the macro story of the Prequel Trilogy.  It tells the tale of a democracy that fell into tyranny through despotism.

Now, contrast this with the First Order. What exactly do they want? If you go back and watch The Force Awakens and The Last Jedi (to be clear, two movies I still like very much for different reasons) the First Order doesn’t really ever reveal its ultimate goal. Do they want to run the galaxy? Well, I think we all assume they do, but they never really say that and it’s not really clear if they even have the infrastructure to even pull that off. How big is the First Order? How much territory do they control, if any? No one really knows. At least with the Empire we knew it was enormous because it was literally the government of the galaxy. Remember, the First Order isn’t trying to wrestle control of the Republic from the inside like Palpatine did. They are attacking from the outside.

All legitimate questions, that those in the Fandom Menace were villainized for asking nearly four years ago.  Now, to be fair, many of these garbage tier writers are very young, probably 19 to 22 or so.  If that’s the case, then they saw The Force Awakenswhen they were only 15 to 18.  So they’re now looking at the Sequel Trilogy through a semi-adult lens for the first time.  This will make the box office for Episode IX terribly interesting.  Will the new fans even return if they’re now asking these questions?  Time will tell.

Now, some SJWs will bark something about it being a kid’s franchise about “space wizards with laser swords.”  But how interesting it is, that the OT and even the PT held the interest of its original child audience as they grew into adults, and facilitated deeper discussions about the rise and fall of civilizations, mysticism, and mythology as the maturity of adulthood allowed deeper layers of the onion to be peeled back.  There are no deeper layers in the Sequel Trilogy, and that’s what the writer of this article is struggling with here.

Let’s put it this way: In The Force Awakens the First Order uses Starkiller Base to destroy the home of the Republic, Hosnian Prime. In real life, this would be like a foreign power destroying Washington D.C. – if this happened the United States would still exist as there are still multiple layers of federal and local government still in place. A way to win against the United States is to dismantle it from the inside (which very well may be happening in real life; the good news is Donald Trump is not as smart or clever as Palpatine), not take it head on. So we can assume once Hosnian Prime is destroyed, this is what happened to the rest of the galaxy. It’s not like the people of Naboo are all of a sudden going to decide, “Well, I guess we report to the First Order now.” So for the First Order to win this way, they’d have to fight each system one by one. As opposed to Palpatine who just took over the already established governmental hierarchies.

The reason that the United States would still exist is thanks to the separation of powers as established by the Founding Fathers.  That’s the nature of decentralized power.  Destroying from the inside would take more than a singular cult of personality.  It would take coordinated activism.  It would take, a “resistance.”

Palpatine began with taking over already established governmental hierarchies.  But after the construction of the Death Star he dissolved the senate.  Fear of the battle station made the bureaucracy unnecessary.

When we look for clues in the leadership of the First Order, it’s as if they all want different things. First of all, we still don’t even know who Snoke really is (R.I.P), let alone what he wants. When Snoke speaks, most of his concerns seem to revolve around the return of the Jedi. He’s obsessed with finding Luke Skywalker so Skywalker can’t return and train new Jedi – something we learn later Skywalker isn’t even interested in doing. (Poor Snoke, his main goal in life was trying to prevent something that was never going to happen. The more I think about Snoke the more I just feel bad for him.) And Kylo Ren, at least in The Force Awakens, seems most interested in impressing his dead grandfather.

But you’re not supposed to care about Snoke’s back story.  After all, we didn’t know Palpatine’s back story, right?  Except that we did.

This is yet another 4 year old criticism that The Fandom Menace was attacked for.  Your Snoke theory sucks, remember? 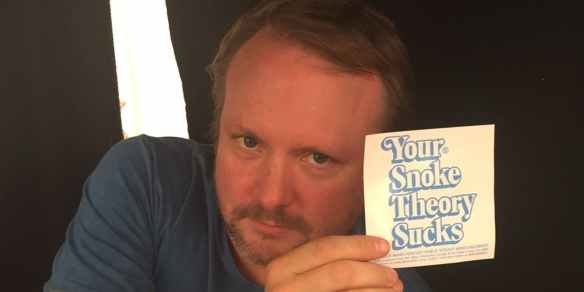 The only member of First Order leadership who at all seems to have any type of military goal is Hux. Reviewing Hux’s dialogue, he really dislikes the Resistance – but almost too much. In that his main goal seems to be to just rid the galaxy of the Resistance. In a meeting with Snoke and Kylo Ren, he persuades Snoke to authorize the destruction of Hosnian Prime because, “without [the Republic] to protect them, the Resistance will be vulnerable.” So, to take Hux at his word, he wants to destroy the Republic only because it will make the Resistance weaker. What if The First Order defeats the Resistance? What then? What do they actually want?!

For you to buy First Order merchandise!

Later, before Starkiller Base fires its weapon, Hux gives a speech. Granted, with the over-the-top manner in which Domhnall Gleeson delivers this speech, it’s kind of hard to pay attention to what Hux is actually saying. But the gist is he’s mad at the Republic because they lie about secretly supporting the Resistance. It’s very weird. No one in the First Order seems to have that big of a problem with the Republic other than the existence of the Resistance – a group that it’s unclear if it has any real ties to the Republic or not. At the end, Hux claims, “systems will bow to the First Order.” But this sounds less like a goal and more like an end result. And end result of what? I’m not sure.

So, going from the movies alone (look, I get there is a lot of supplemental material, much of it I’ve read, but movies shouldn’t need a guide book to understand basic plot points) here’s what I’ve determined is the goal of the Resistance and the First Order. The Resistance’s goal is to defeat the First Order. The First Order’s goal is to rid the galaxy of the Resistance and to do that, they had to try and destroy the Republic. These are weird goals. It’s as if the galaxy is just running as normal and there are just these two little factions, off on the side, battling it out for unknown reasons.

And yet many critics of the Sequel Trilogy films have been told that they need “to do their research.”  As though reading countless novels should prepare one to understand  this nonsensical drek.

It’s like saying that the Taliban’s goal is to destroy the U.S. Marines.  But before they do that, they have to destroy the United States.  Huh?  This goes back to the SJW misunderstanding of military history.  They simply don’t know what they’re writing about, which is why none of it makes sense.

Again, based on what we know, I’m not convinced the First Order even wants to run the galaxy. I’m leaning heavily toward the fact they do not. It’s almost like they just want to be respected and the Resistance is making that more difficult.

When The Rise of Skywalker hits theaters in December, Kylo Ren will be in charge of the First Order. Who knows, maybe he will have an actual goal. In The Last Jedi when he asks Rey to join him, he says they together can bring a “new order” to the galaxy, whatever that means. The good news is he’s had a couple of years now to figure it all out.

Read the whole thing. He may have had a couple of years.  But if the same writers are writing Episode IX, then he won’t.  Neither will anyone else.