Following my last article here, which Bleeding Fool bravely found reason in running after 15 larger platforms either bluntly shot it down or ignored me altogether, I’ve been thinking half-seriously of starting a Patreon for people to pay me to stay out of comic books. Empowering me to never talk about them in any capacity for any venue. Maybe the tiers would be reverse rewards, with the bigger contributors enjoying more silence/invisibility from me. But really, if I wanted to brag about my accomplishments or lament my lacks thereof, I’d probably be able to hold onto a social media account for more than a few weeks. I would never under any circumstances play devil’s advocate however, because life incessantly shows us most people are absolutely capable themselves of saying and doing really horrible things without others needing to take blame or credit. But they are also capable of goodness. In that light, while my article before may come across as me wanting to bury Caesar, that is not the case, although that doesn’t mean I care to praise him as the alternative. 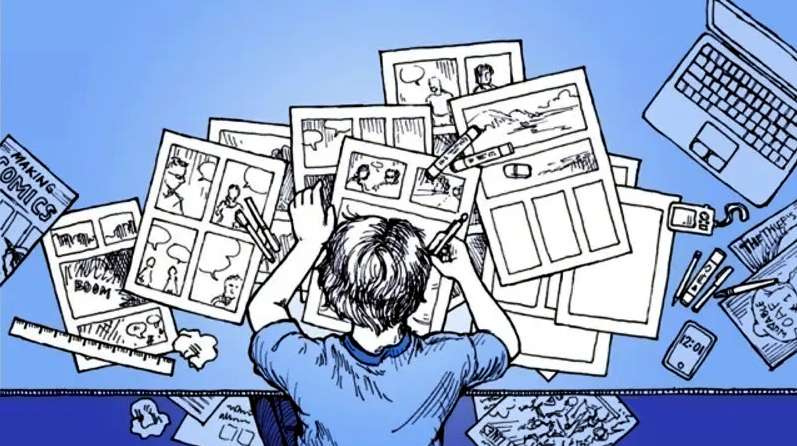 Do social contracts have only the choice between repeating or reflecting the perspectives of others? When there is no congregation, then there is no choir to confine our speech towards. We mindlessly go with the flow when it comes to voting Republican or Democrat, all too casually forgetting 23 minutes ago when the good guys failed to prevent the bad guys from wrecking society and culture. In your life or mine, the people who did the most good for us when we were at our lowest, were hardly doing so because of their liberalism or their conservatism, but rather because of the obvious need to compensate on their behalf. And the same applies to comic books.

The smaller publishers too often wish to emulate or to reflect the larger publishers, their talent wanting to emulate or to reflect the talent-pool of the larger pubs. Likewise with comic book journalism, the larger webzines are stocked with staff itching to work for the larger publishers, so work to emulate or reflect to that end, while too many smaller platforms work to emulate or reflect the larger comic book news sites, hoping for a piece of that readership or ad sales. When I was writing a few thousand comic reviews, I never touched a Marvel or DC book, because they can afford marketing divisions, and if one wishes to stand out then repeating or reacting to what everyone else is repeating or reacting to is hardly the way to go about it. That’s unaccredited codependency. We are far more likely to find what we need with the self-publishers who have noted voids needing to be filled, just as we learn more about what’s going on across the industry from smaller platforms not brown-nosing bigger production houses. And outside all of that, we find ways to survive this society in spite of the bipartisan machinery of governance, by our own merit and mettle or by that of the most responsible individuals in our immediate orbits.

If we know struggles, it’s our neighbors and coworkers in our corners even more than family and friends. If we want to be informed, schools and commercial news all have opted instead to appeal to what the masses are most comfortable with already, prompting us to inform ourselves. Each and every social media account exists in service to that which the account holder likes. When I was 10, I hated wearing t-shirts with any words or pictures on it, because I did not see myself as a billboard. But like with news and education and governance, if we need to be entertained, we must make that effort ourselves too, or subscribe to the efforts of those choosing something else than to meet some company’s bottom line where thoughts and feelings are as replaceable as writers and artists. If you want a job done right, DIY. Betwixt ongoing bouts of manly-man labor reclaiming my little sister’s property from these economically vainglorious times, I’ve been viewing the Baron-Earls video series of interviews on YouTube. Earls I can see learned by necessity to be a producer himself in every sense, while despite Mike Baron’s decades of writing experience, when most writers repeat themselves after a few years he never stops looking at the world through fresh eyes, so that his work constantly evolves. Which is something even heavyweights like Chris Claremont frankly never manage. The series had a rough start, but their personalities and the candidness of their interviewees makes it really worthwhile. And, their informative talk with the astute Ann Baron about crowdfunding struck some nerves leading me down memory lane.

Whenever I name-drop, know that it’s not me signal-boosting what passes for my ego, so much as me acknowledging that I have communicated with a lot of people over the years. And I fully realize most would not remember me from jack at best and at worst, did not care less when I gave 5 years of my life trying and failing round the blessed clock to keep a family member from dying. Relationships are difficult to maintain even without contagious tragedy, but creative industry guarantees its improbability. My approach to life has always been that nobody is truly a friend or an enemy, and I’ve made it this far without ever falling into debt to any person, place or thing so I am not changing. I try to be so ego-less, I admit that I am operating on a GED. One of my last comics gigs actually involved proofreading and an awful lot of script-doctoring for a vanity line of educational graphic novels, meaning that the state of writing and editing in comics today requires some dude with a GED to step in from the shadows to make them all look pro. And that job ended with me being personally stiffed by an actual billionaire, because bam pow boom comics ain’t for kids anymore. I am not bitter, I am amused. 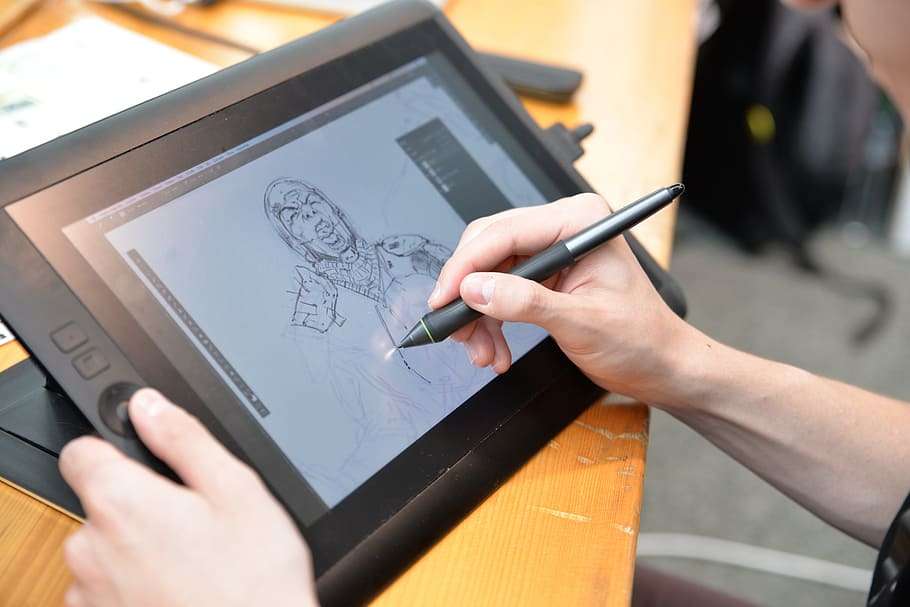 I’ve drawn parallels and conclusions in the past, of creative industries in particular being at once chain-gangs and bucket-brigades. For many, many years I was just inside the periphery of the comic book biz. After a few hundred interviews conducted, I was close enough to turn down invitations to pitch, and I was close enough quite a number of folks commissioned me nonetheless for proofreading, script-doctoring and even ghostwriting gigs. So many small publishers would have me write their ad-copy for the Diamond Previews catalogue, as they liked how I worded their intentions in my own articles concerning their goods and services. And communicating with so many different folks allowed me to learn of job opportunities I could pass on to others I knew who where locked in starving artist mode. I never wanted to be in the credit boxes and I never wanted to be a headline. I’d get blacklisted from some places for refusing to repost press releases, which I always termed as unpaid adverts, and I would get blacklisted from other places for writing negative reviews. But I’d also blacklist in turn, publishers fallen way, way behind in paying the creators carrying them aloft. I would openly troll egos wanting their wills be done by others. Some people respected that.

Maybe 9 or 10 years ago, Adam Post reached out to me about constructing a new indie webzine for him, to be called We Love Comics. He had the idea for a portal focusing entirely on crowdfunded endeavors, and was a wealth of ideas throughout all the design-work that followed. In developing a site philosophy for its mission statement to justify its own existence, I composed this: 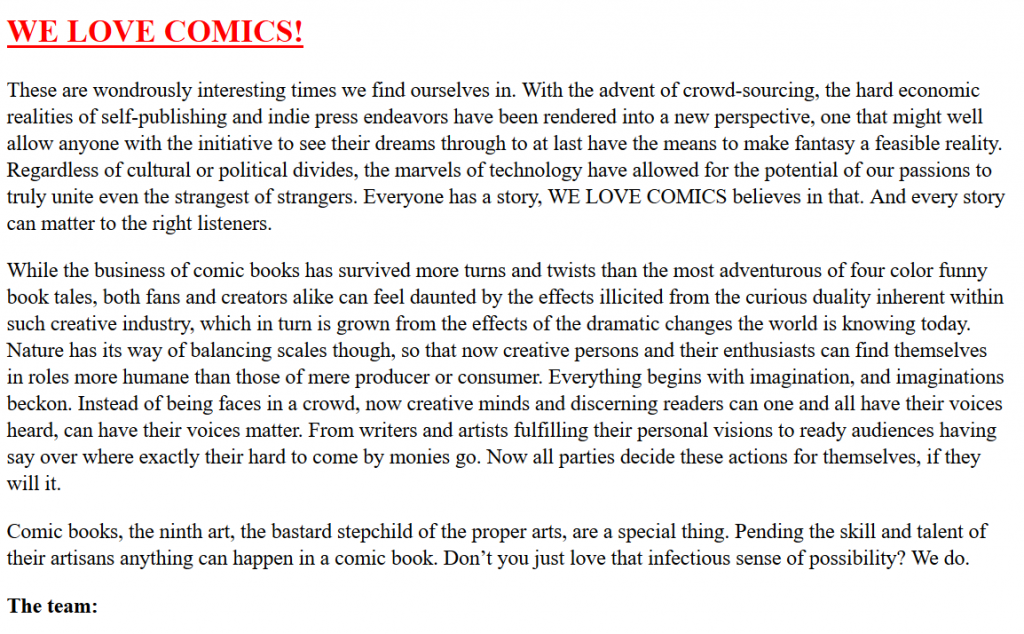 Which today sounds at once like a praise for the free market and like a praise for communism. But a year or so later I took that line of thinking even further, when helping Mark Mazz get his own webzine Comics Creator News setup following the passing of the great Bill Baker. 9 years ago I saw the survival of the medium resting not only on self-publishers embracing crowd-sourcing, supply thus meeting demand as opposed to demand manufactured to meet preordained supplies, but also on self-publishers uniting as autonomous units of a greater whole. I encourage all self-publishers to seek out ways to help other self-publishers, because chances are that assistance is needed, and should the shoe slip on the other foot then you then have more potentials yourself for an eleventh hour saving grace. Maybe that’s still possible. Yet along with everything else, it’s gotten binary, with Kickstarter and Indiegogo dominating while sharing only their own territorial walks and talks, when they are not now nor have they ever been the only games in town. As such, a zillion words into this article, I’d like to offer some alternatives for the self-publishers and crowd-funders out there in the wilds. Because without people doing their own thing in life, the system itself is incapable of learning what to emulate or what to reflect.

Of course, you can always sell off your own collection to make your project happen, or to have the funds for supporting as a reader the new projects you’d like to come about.

Just a decade ago, between Blue Line Pro for supplies and Indyplanet for print on demand services, self-publishing had become so stream-lined, funding aside. I gather Indyplanet’s Kablam printing service is still around but they have since dropped their limited distribution subsidiary, comics monkey. But they were founded by comic book veterans for love of the game, so I imagine will continue their functions of realistic print runs for the small-presser. The virtual school for comics Comics Experience has its own subsidiary for small press printing now, ONS Printing. As with Indyplanet, it’s managed by people who personally identify with the small press creator. To go further outside the box in expanding our list of options, there is a long-running print on demand outfit called Lulu. They do not specialize in comics per se, but I know a guy who put together a 300+ page, b&w OGN through them, and the book looked good, And in the spirit of Warren Ellis, I used to look at MagCloud and imagine so many things that might be done with them, if you’re looking to do something other than a traditional floppy, from magazines to graphic albums. A bit pricier, but their finished products tend to be high quality. But for any self-publishing crowd-funder, I cannot stress enough the importance of a solid packager. Doubling as marketeer is daunting enough, but no matter the route used to get a printed book into as many hands as possible, you cannot shortcut the production. Jaymes Reed is one of those guys who writes and edits and designs comic books, and has done so for nearly 20 years, but he has always been a letterer first and foremost, with his biggest credit probably being Alan Moore’s Crossed +100 series. If you need your project to come together, you need people possessing both skill and talent for the pre-press packaging like Jaymes. Or you could just email him, as he is insultingly affordable.

And conclusions like that are why I usually do this for free.

Richard Caldwell is the only person alive or dead to have written for both Heavy Metal Magazine and the Ditkomania fanzine. He served on the final BoD for the Friends of Lulu nonprofit, co-edited the Solestar OGN raising 20 grand for the Brain Aneurysm Foundation, and his name is buried in the closing credits for the Iron Sky film because life is a long story.