Image Comics co-founder and artist Erik Larsen, quite a boilerplate leftist himself, has taken issue with the whole embarrassment that, for those aware of how things were conducted in the 1990s/2000s know, may have begun with DC, and Marvel continued it in the past decade. Problem is, Larsen seems to have erased most of the initial parts of his complaint from Twitter, so I have to rely on what’s provided by Bounding Into Comics, whose webmasters provided some screencaps.

Larsen made his thoughts on the matter public in a recent thread on Twitter where he stated, “For some reason the conventional wisdom at Marvel and DC is to have new characters assume the identities of old characters.”

He explained, “But if I’m a fan of Iron Man–I’m absolutely NOT buying your s****y new Iron Man. I WANT it to flop so that old Iron Man can return.” 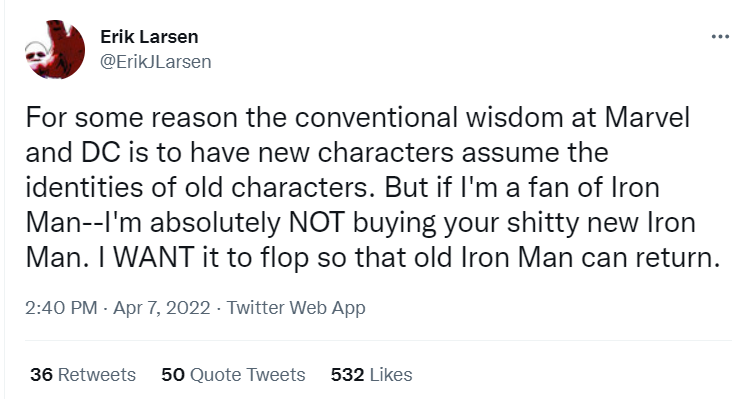 Trouble is, if recent activity of the Big Two is any suggestion, including the way they’ve repeatedly dealt with Steve Rogers as Capt. America, they want to get rid of such characters altogether, doing worse than just kicking them to the curb. As anybody who’s a realist comprehends, if they’re that obsessed, they’ll go miles out of their way to practically do what DC set in motion with Hal Jordan in 1994, when they had him villainized and later slaughtered for the sake of a political correctness that’s gotten considerably worse since the turn of the century. And it didn’t stop at costumed superheroes. Even “civilian” co-stars fell victim to this horrific, contemptible mentality. If memory serves, the Golden Age Atom Al Pratt’s lady fair, Mary James, was an early victim of this too, back in the mid-90s at the time Zero Hour took place (in hindsight, this is why I simply cannot appreciate the series titled Damage, which starred Grant Emerson, a son conceived for Pratt and James at the time).

Now, here’s what remains of Larsen’s connecting tweets by the time I got around to checking:

Creators get backend participation in new characters but not in reinvented ones--if Ed Brubaker had made the reveal for the Winter Soldier a red herring and instead revealed he was Fred Johnson--he would have had participation in that character. Instead he got nothing!

This made me think of something puzzling I’ve never understood in the approach to residuals, as practiced by the mainstream: why aren’t creators given royalties based more upon whether their work is reprinted, than on what characters are employed in a story going to press in the present? That’s something they’ve never seemed to emphasize, and has thus struck me as very bewildering, yet could perfectly explain the whole slew of comics that have yet to see reprints on a consistent basis, stemming from the Golden Age to the early 2000s. It goes without saying that to remain so lazy on reprinting a lot of the Golden Age materials that have yet to see official reprint – which both DC and Marvel have their share of – is insulting the audience’s intellect, and not giving them a real chance to read and judge the material for themselves.

The whole mindset of “I’m not going to GIVE these companies my great ideas” is self-destructive if you give them your great ideas anyway--and do it in such a way that you don’t get a piece of it.

Well maybe he’d want to consider arguing it’s time for the publishing arms to be bought out by separate businesses with more common sense in how to market the creations/stories, and how to emphasize specific themes in a way that’s respectable of the public’s intelligence, without shoving divisive ideologies down the audience’s throats. That separate business, however, cannot be Image, because they’ve already got more than enough of their share of SJWs running the show these days, not the least of whom could be Larsen himself.

Does it really need to be argued that, by making Savage Dragon into such a political product, along with sleazy depictions of sexual material, he’s not only pandering to the very same people who’ve turned Marvel/DC into such embarrassments, he’s also undermining his own arguments? What good does it do to run these arguments if he can’t avoid being such a far-leftist? As a result, even his criticism of the censorship that was running rampant in the mid-2010’s was undermined. If the modern push for censorship is coming mainly from the left, then he’s got to take issue unambiguously with said political faction, and can’t water it down or tiptoe around the issue. Unfortunately, I’ve got a feeling he’ll continue doing just that, which is exactly why the problem with serial efforts to marginalize white protagonists in favor of politically motivated replacements with different racial background or sexual preference will continue for quite a while, certainly for as long as DC/Marvel are still publishers. 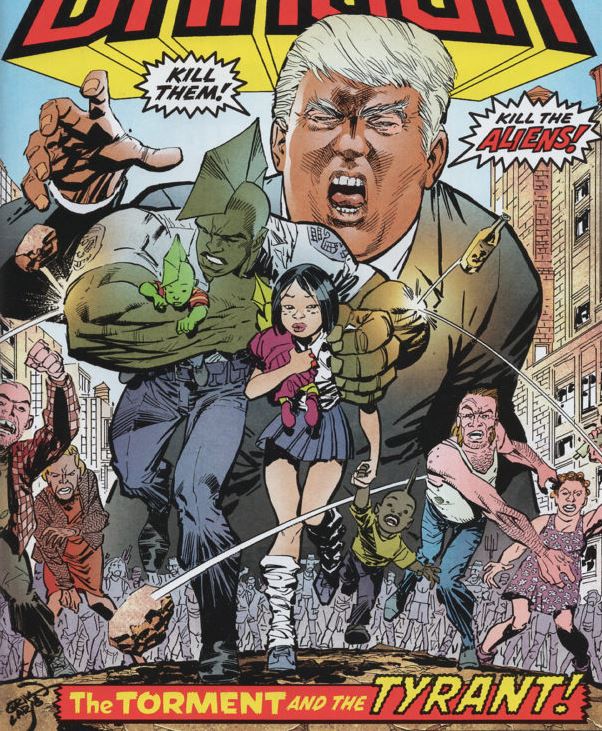 In fact, since Larsen brought up Iron Man, Marvel may be trying to get rid of Tony Stark altogether, but, does Larsen approve of their retconning Tony’s parents? How come only now does IM come up, when he would’ve done better to call out Marvel on this topic before? Sometimes, it’s not enough to just complain about a forced replacement in the armor, when a forced retcon to the origin can be just as harmful.

Here’s also some more of the ensuing thread, which included this part about the Hulk:

I hated all of that. It made the Hulk so much LESS unique when absolutely everybody became a Hulk. It’s so lazy and it dilutes the character so much.

That’s correct. Marvel’s refusal to work on more challenging ideas – even metaphors – resulted in desperation for something they believe counts as an exciting story, and look where it all wound up: with everybody turning into a gamma-radiation concept, and even Red She-Hulks, for that matter. There’s even some input from other artists and writers:

Because it’s easier for casual fans and interested non-fans to engage with a character that is familiar. They don’t want to invest in a character that may not stick around for the long term. Readers keep rejecting completely new characters and it takes time for a character to

If Igle looked more closely, he’d notice some recent creations like the Muslim Ms. Marvel and Muslim Green Lantern, along with the LGBT renditions of specific characters, have been kept going in some way or other based on political motivations, no matter how poor their crafting is, and how much this alienates audiences as a result.

If I create a character for DC who is entirely new but name him Batman--I get zero character equity--if that same character is called Battalion--I do.

See, this again is what makes the whole approach to publishing awkward at best. It doesn’t really focus on merit in writing, let alone artwork. It also makes clear why I think most creators should get residuals based on paperbacks/hardcovers sold in stores, and why it’s time to abandon the pamphlet format. That’s something else guys like Larsen curiously fail to address. If they really want to lay out the groundswork for bettering the industry’s future going forward, wouldn’t it be time to drop formats no longer delivering? His Savage Dragon series, if I’m correct, still relies on monthly pamphlets as the storytelling format, and as terrible as it is, wouldn’t he rather switch to a paperback format that’d carry it forth much better, if modern audience prefers such a format?

Or maybe Larsen prefers sticking to the current because it’s a better way to flood the market with his far-left politics in the bargain bins; I’ve sometimes suspected that’s why the pamphlet format’s still in use, because major publishers hope unwitting buyers will scoop them up on a whim, and won’t be shocked if my suspicions are correct. If such is the case, no wonder his arguments don’t carry the weight they could’ve.

With the movies it’s easy--just cast your film with a diverse group and ignore the comics and the fans on Twitter because nobody cares. In the comics, that’s more difficult because you can’t just swap the races of existing characters.

Wes Daugherity decided to wait until the moment he knew would eventually come. Larsen proved he still has progressive bonafides while throwing Lee and Kirby under the bus to prove his point. Wes also reminds us that Larsen once suggested turning Frank Castle’s the Punisher gay just to make people mad. This guy is a clown. – editor