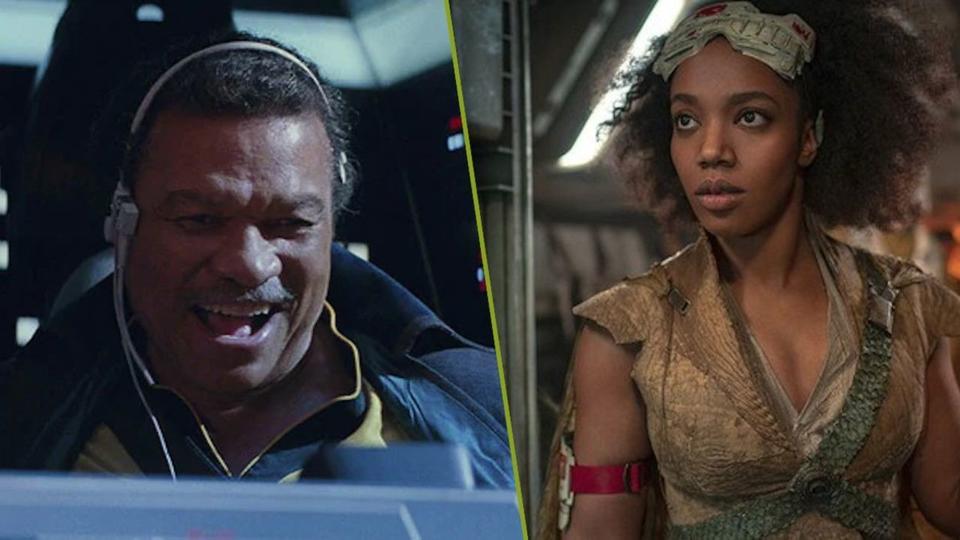 The Rise of Skywalker novelization seems to be an essential read if anyone wants to know what was going on in the movie. When the final installment in the Skywalker Saga was released late last year, Star Wars fans were led to believe that new character, Jannah, could be Lando Calrissian’s daughter. On the big screen, it’s vague, but it is certainly hinted at in the way that Billy Dee Williams looks at Naomie Ackie at the conclusion of the movie. The novel seems to imply that this isn’t the case.

In The Rise of Skywalker, Lando and Jannah meet after the Exegol battle. He asks Jannah where she’s from and she replies she doesn’t know. We learn earlier in the movie that she was abducted by the First Order as a child, much like Finn. Lando then cryptically says, “Well, let’s find out…” From there, either people thought Lando was hitting on the young woman, or that she was actually his daughter. Author Rae Carlson seemingly puts the rumors to rest in the novelization of the movie.

In a passage from the book below:

“Lando and the Lady Luck would help these special kids. Find their families, if that’s what they wanted. Help them discover their new place in the galaxy. Heck, maybe he’d find his daughter. Probably not; he knew the odds. But that would be a pretty good way to spend his twilight years, right? If the kids were amenable, anyway.” It seems that Lando Calrissian is going to be out helping kids after his latest adventure with the Resistance. This makes sense, especially considering the character’s backstory, which was fleshed out in The Rise of Skywalker Visual Dictionary. In that particular book, we learn what happened to Lando’s daughter.

The dictionary has this to say about Lando’s family:

“When peace reigned, [Lando] attempted to start a family, but tragedy struck and his infant daughter vanished. It was only later that it became clear who the culprits behind the abduction were: the First Order, building their fighting forces but also specifically striking out at the old Alliance leadership.”

Looking at The Rise of Skywalker Visual Dictionary and comparing it to the scene featuring Lando and Jannah, it’s easy to see why Star Wars fans assumed she was his daughter. The Visual Dictionary pretty much sets it up, which is contradicted in the official novelization of the movie.

Tarantino's Disney Complaints Resurface with Heavy Doctor Strange 2 Screenings
Star Wars Day Offers 2022: May the Fourth Be With You
Lucasfilm Announces All-New Star Wars: Tales of the Jedi Animated Show
Behind the Scenes from the Set of Star Wars: Obi-Wan Kenobi
Production Pushed Back for Disney's 'Star Wars: The Acolyte'
How to Make Sense of Disney’s Ongoing War on Children
Groomer-Gate: How Disney Has Pushed LGBTQ Content on Kids for Years