This I intend as a public statement regarding my position and my feelings regarding the Twitter debacle and should not be considered a journalistic piece in on itself. Over the weekend, I was in a Twitter exchange over the hiring of Eve Ewing with comic creator Kurt Busiek. When I mentioned that I had scouted talent for Marvel Comics at a con, this suddenly happened… 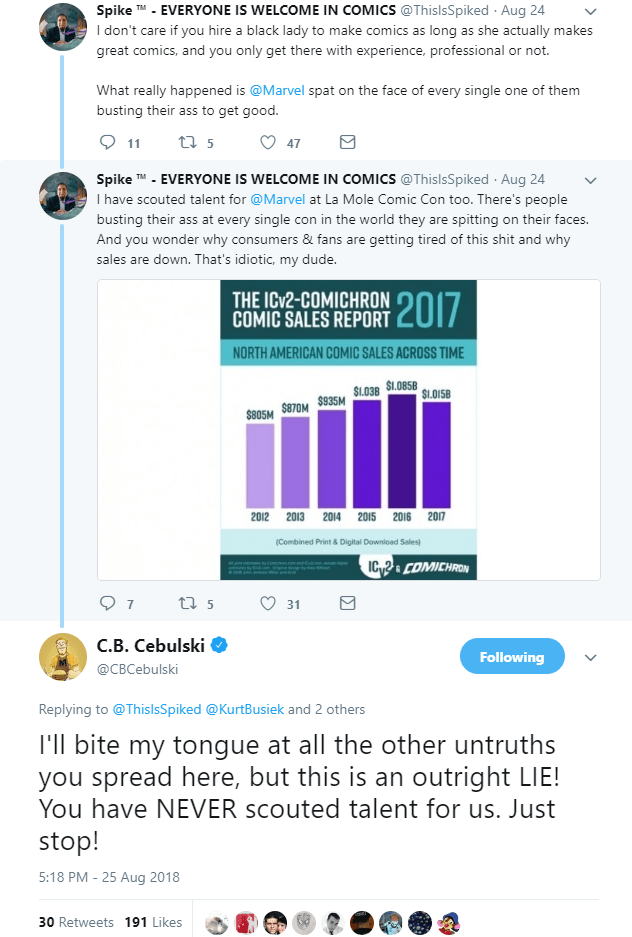 Yeah, that’s me. Bet you’re wondering how I got there. My history with Marvel spans out for some years. It was around 2012 when Rulo Valdés asked me to do some script interpreting for his gig on X-Treme X-Men. We were working at the time together with a mobile app developer in a short-lived project called ‘Los Luchadores’. After that, Gerardo Sandoval also contacted me when he was doing sample pages for DC but then landed a Marvel deal. 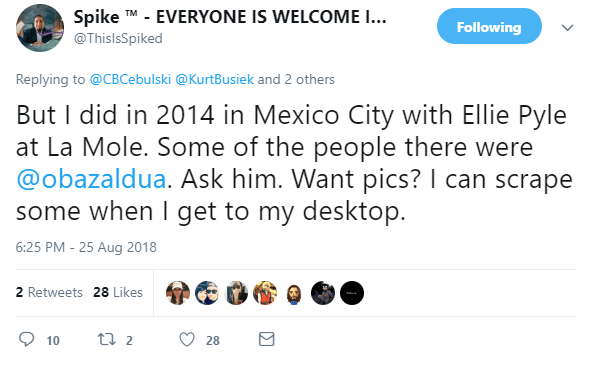 At the time I was a regular guest in comic book podcasts, I was on FM radio, I had worked at a comic book store called Badabing!, I was also working at Mexican comic cons like Expo Comics MX and La Mole. I was writing articles for Comikaze, a Mexican magazine, sending stuff here & there to Rich at Bleeding Cool as a Mexico City correspondent for the site. I had already worked in a couple of Mexican films (Antonio Roma’s Ambiciona & Migue Arenas’ Buscando A Mar) and was a student at Sogem where I specialized in writing screenplays, the closest thing I could get to comics. 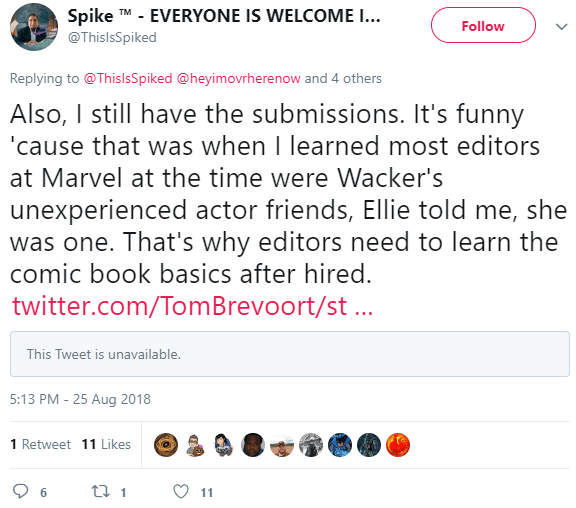 It was no secret I was obsessive about writing comics since forever. My first Marvel rejection was when I sent a Thor rip-off to Bob Harras when I was a teenager. He told me to ‘git gud’ (and he was entirely correct). Since then I’ve showed my scripts to everyone I could and have submitted to talent hunts through the years, like the ones Top Cow did or the Millarverse ones. 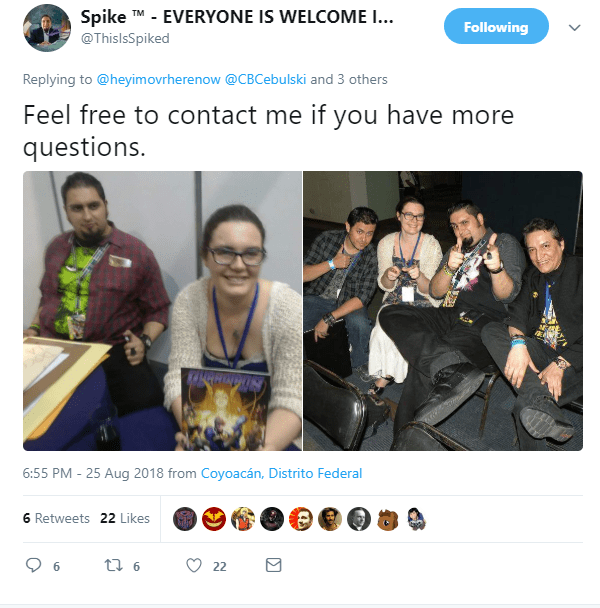 This all comes into play because that was the reason La Mole Comic Con, where I was an interpreter, asked me to assist Marvel editor Ellie Pyle with the portfolio revision. There was a filter first which featured professional Mexican comic book creators Paco Medina (Deadpool) and Ramón Espinoza (Niebla). After that, the ones who made it had a portfolio revision.

Some of the known artists there were guys like Óscar Bazaldúa, who was already a professional comic book published in Mexico and Europe, and later did some work for DC and currently has a Marvel exclusive. I have also helped him with script interpreting.

I did more than just translate stuff since I had both experience with the craft and knew the vast majority of the applicants, even going out of my way to help them show other works displaying styles different from the ones in their original portfolio pages. If I remember correctly I did that with Axur Eneas and Rocko Escárzega.

Let’s just say this is the reason I was later hired to write a story in the Spider-Verse miniseries edited by Ellie Pyle & Nick Lowe. Marvel printed it, you are free to check the evidence yourselves. 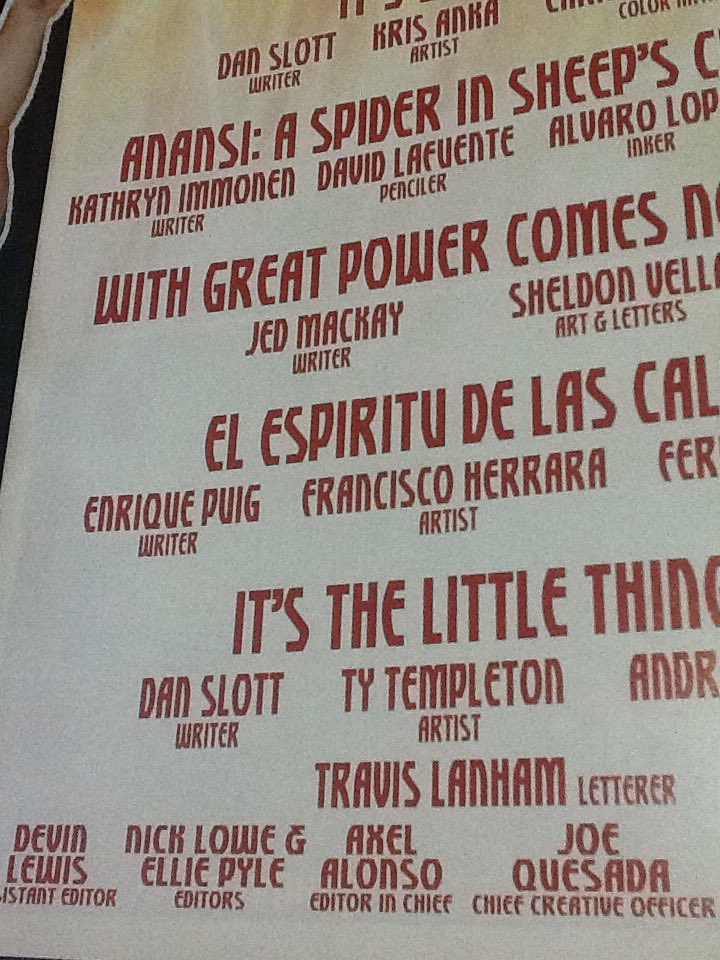 I’m a liberal technocrat myself, I believe in equal individual rights for everyone and merit. That’s why my problems with Marvel began when I started working for them closer. I realized it was amateur hour within the editorial staff (I even had to ask for corrections for the scripts while doing script interpreting, but I didn’t know it was this bad before).

My last pitch for the company was a 4 page story linked here. I got Mauricio Caballero to draw it in the early 2015. After that, I wasn’t really motivated and didn’t communicate with Marvel except when I was approached to help doing script interpreting and receiving my royalties when they were due.

The industry seems to love making storms with little glasses of water which could be easily avoided with a modicum of professionalism. They don’t really have a lot of control of what is going on. Assistant editors come and go like seasons of CSI television and they really have no control, especially with international creators. This nothingburger pales in comparison to scandals like editors printing anti-Semite, anti-Christian Surahs in an X-Men book. 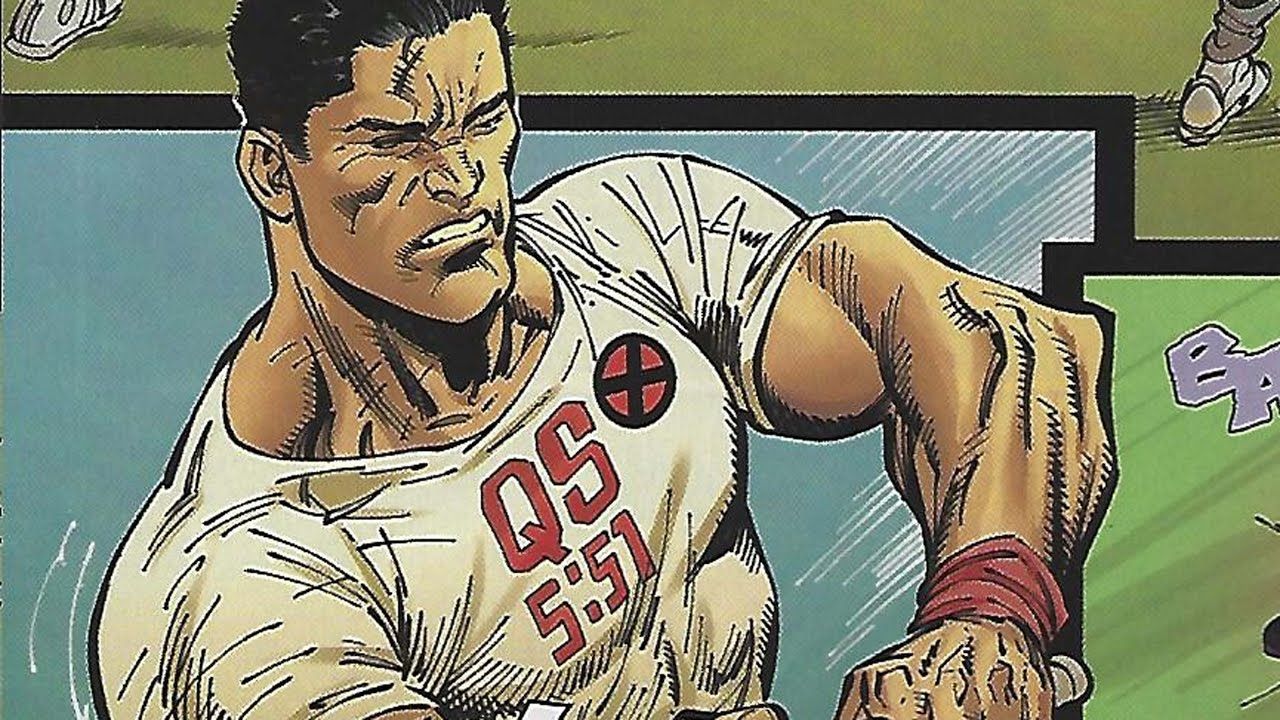 I have always conducted myself with professionalism regarding my work

All this time I could have inserted Kekistani flags in the comic book scripts to be drawn in the background or leak stuff, but I have always conducted myself with professionalism regarding my work and I have never done anything like that, even when I didn’t have a talent agreement and I could have easily capitalized on this kind of access with absolutely no repercussions. I didn’t.

There’s a reason why it’s me in this story. There’s a couple of coworkers with somewhat similar backgrounds. I’m not the only Mexican citizen grinding about comic book scripts and translations. I wasn’t the only writer/interpreter/journalist around. I just keep doing what I do and people appreciate it and come to me.

There’s also a reason why Mr. Cebulski decided to go after my usual, insignificant Twitter banter. No one else would have looked at twice at what I said, but what I said is entirely correct and Marvel is running out of arguments to spin what’s happening, and their postmodern insults and Marxist buzzwords like “white supremacist”, “Republican”, “Trump voter”… whatever, just doesn’t stick to me because everyone who knows me knows I’m an extremely chill Punk/Metal nerd from Mexico City with a very tolerant attitude and a globally diverse circle of friends in-and-out of #ComicsGate.

I refuse to play lapdog for anyone who doesn’t care about merit. I refuse to bend to anyone who assumes I will defend their Marxist elitism--literally--just because I happen to have liked the company’s products when I was a kid.

If you dislike “edgi bois” from Mexico City, then you are completely within your rights to move along and ignore me. But this edgy boy from Mexico also has a lot of pros who know that I provide a valuable service and they have no problem calling me at 2 A.M. for me to explain stuff from their scripts to them. I wonder why Mr. Cebulski didn’t DM me on Twitter or call me up or email me? A little bit strange. And he still hasn’t responded to my evidence or my replies.

Again, this is just my public statement regarding my position and my feelings regarding the little Twitter dust-up and should not be considered a journalistic piece in on itself. I invite Marvel to follow suit if they feel anything needs to be addressed instead of going about it like edgy internet trolls such as myself. I only represent me, not the largest name in the North American industry, a company which has never paid me to control my timelines.