Here’s a story on One Angry Gamer about what appears to be a DC-Ink imprint title starring the overused villainess who’s not much more than a quarter century old in creation alongside another villainess who’s been around a lot longer, in a tale filled with more obvious social justice propaganda, and even potentially denigrating to black women:

More race-swapping, this time it’s DC Comics. Mariko Tamaki and Steve Pugh’s Harley Quinn: Breaking Glass, which is due out in September, has race-swapped Poison Ivy, turning the seductive redhead into a black person with an afro. Yes, the redhead genocide in fiction continues.

The news originally came courtesy of a trailer that DC put out for Tamaki’s new comic, which is only 30 seconds long but reveals that a 15-year-old Harley Quinn, who lives with a drag queen named “Mama”, befriends a black Poison Ivy to fight against mega-corporations gentrifying Gotham.

It certainly sounds loathsome, but depending on your viewpoint, what’s most disturbing is the depiction of a black woman in the role of a villainous character who became a deadly killer over the years. What Tamaki and Pugh have done here, IMHO, is decidedly sick. Surely the biggest irony is that DC’s owned by a mega-corp – one doing a very bad job with their businesses at that – and yet, despite how a number of corporations/conglomerates are horribly left-leaning today, they still have no problem with crafting this stuff. 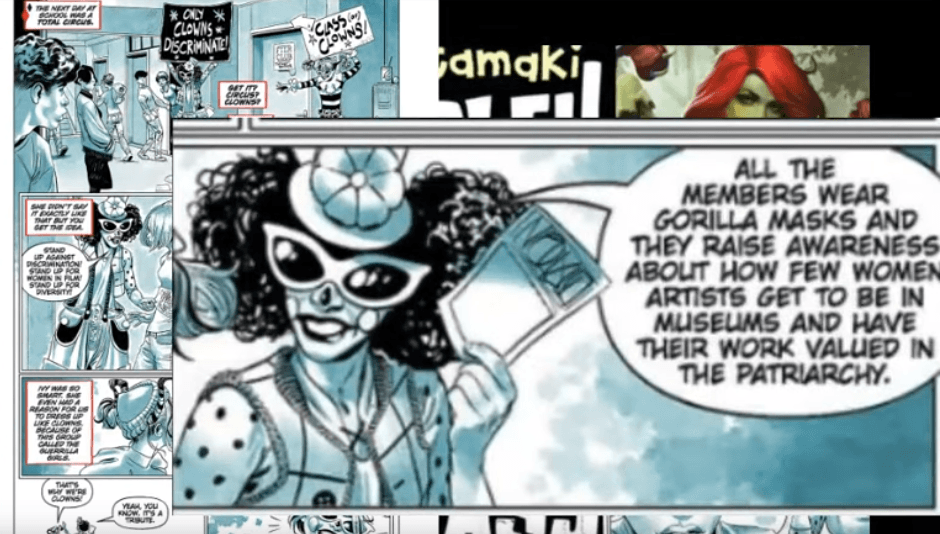 The most egregious part of the page, however, is the stand-in for Antifa, where Ivy attempts to recruit people into a similar group in order to fight the patriarchy, claiming that they wear “gorilla masks” and try to raise awareness about inequality that women suffer.

And the claim lady artists hardly have their work put in museums is a lie too, since if the writer did her research convincingly, she’d find there’s tons of female artists out there like Sonia Delaunay, Faith Ringold, Tarsila do Amaral, Leonora Carrington and Mary Pinchot Meyer. As for the Antifa metaphor, it’s coming at a time when the government is considering labeling them a domestic terrorist group, and the writer of that Fox News piece himself is a former member who wisely left the abominable hoodlums. Did it even occur to the scribe of the Harley Quinn comic that if women suffer inequality today, it’s because of the left pushing propaganda and insanity like transexuality, encouraging men to pretend they’re women in order to rob them of prizes like scholarships in marathons? Why, did she ever ponder how the now notorious leftist filmmaker Harvey Weinstein sabotaged a film about another notable lady artist, Frida Kahlo, and gave Salma Hayek a terrible experience? These leftists never consider their own side.

This may be an Ink imprint book, but it’s still no excuse for pushing this distasteful political propaganda. Especially if they take an accepting view of Antifa.

Our girl Tristen Just (aka Nerdette) also weighed-in on this.