Another form of censorship/cancel culture has taken place that was surely expected, given the cowardly atmosphere now. It all began when a NY Times propagandist exploited Dr. Seuss Enterprises’ own cowardly discontinuation of 6 of the late author’s children’s books to suggest similar actions be taken with Pepe Le Pew and Speedy Gonzales from the Looney Tunes franchise:

Charles Blow, a left-wing columnist for the New York Times, has suggested canceling the popular Looney Tunes cartoon characters Speedy Gonzales and Pepé Le Pew — the former because it is “racist,” the latter for contributing to “rape culture.”

Blow made the suggestions in a column applauding the removal of several Dr. Seuss books from circulation for allegedly racist caricatures. In the column, titled, “Six Seuss Books Bore a Bias,” Blow argued: “Racism must be exorcised from culture, including, or maybe especially, from children’s culture.”

[…] Pepe Le Pew has been targeted before, notably in 2018, shortly after the emergence of the #metoo movement. Breitbart News’ John Nolte noted: “Pepé Le Pew is the butt of all the jokes, who always, always, always loses in the end — usually violently at the hands of his so-called victim.” 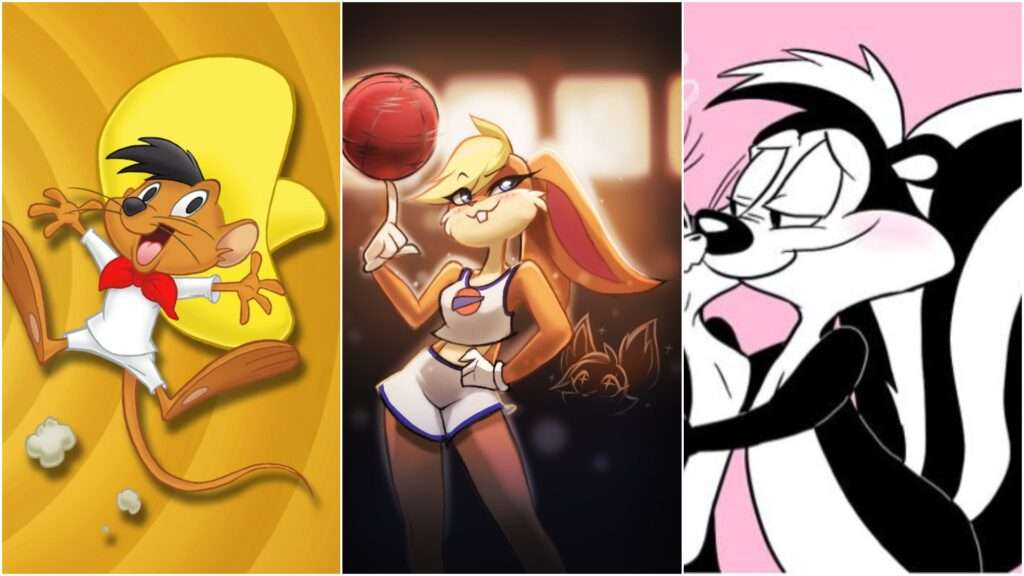 Well now it’s led to a capitulation from the makers of the Space Jam sequel, as reported by Deadline Hollywood (via Breitbart), and the irony of how they obliterated the anthropomorphic skunk’s role from the footage featuring singer Greice Santo is stunning:

But wait until you hear about the scene with Pepe which was cut.

Pepe was set to appear in a black-and-white Casablanca-like Rick’s Cafe sequence. Pepe, playing a bartender, starts hitting on a woman at the bar played by Santo. He begins kissing her arm, which she pulls back, then slamming Pepe into the chair next to hers. She then pours her drink on Pepe, and slaps him hard, sending him spinning in a stool, which is then stopped by LeBron James’ hand. James and Bugs Bunny are looking for Lola, and Pepe knows her whereabouts. Pepe then tells the guys that Penelope cat has filed a restraining order against him. James makes a remark in the script that Pepe can’t grab other Tunes without their consent.

Upon learning that her scene with Pepe was cut, Santo was upset according to her spokesperson. The actress-singer has been a victim of sexual harassment and has spoken out against it; even recording a debut single “Você Você” back in February 2018 with multi- Grammy-winning producer Humberto Gatica to empower women to stand up to sexual predators and sexual harassment. Santo even has a non-profit, Glam with Greice, which aims to empower victims of domestic violence to change their lives for the better. Santo took joy in shooting the Space Jam sequel scene with Pepe, because the skunk finally gets his comeuppance.

A spokesperson for Santo tells Deadline today, “This was such a big deal for Greice to be in this movie. Even though Pepe is a cartoon character, if anyone was going to slap a sexual harasser like him, Greice wished it would be her. Now the scene is cut, and she doesn’t have that power to influence the world through younger generations who’ll be watching Space Jam 2, to let younger girls and younger boys know that Pepe’s behavior is unacceptable.”

So here, the original script segment actually did a special favor for everybody rightly dismayed at sexual harassment/abuse, yet the studio caved anyway. This can’t possibly bode well for much of the rest of their properties, to be sure. It’s beyond absurd how a cartoon character whose actions are mild in comparison to graphic scenes you may see in adult live action films is considered the problem, his repeated defeats notwithstanding. Funny thing is, this doesn’t seem to have anything to do with whether Pepe represents a negative stereotype of French. I guess they think French-bashing by contrast is acceptable?

So far, Speedy Gonzales has not only avoided this situation, the guy doing the voice acting is defending the Mexican mouse and slamming cancel culture:

“I am the voice of Speedy Gonzales in the new Space Jam,” Does this mean they are gonna try to cancel Fluffy too?” the stand-up comic said, referencing his nickname. “U can’t catch me cancel culture. I’m the fastest mouse in all of Mexico.”

Good on him, but after the Pepe debacle, most people will probably be discouraged from watching anyway, including all the women the omitted segment was meant to impress upon. Will Popeye comics and cartoons where Bluto viciously grabs Olive Oyl by the arms be next, despite how his actions are presented as villainous? Come to think of it, the studios in charge of those probably already have seen to it they’ll never be broadcast again, not even the 1980 movie directed by Robert Altman, even though that may not have been successful financially. 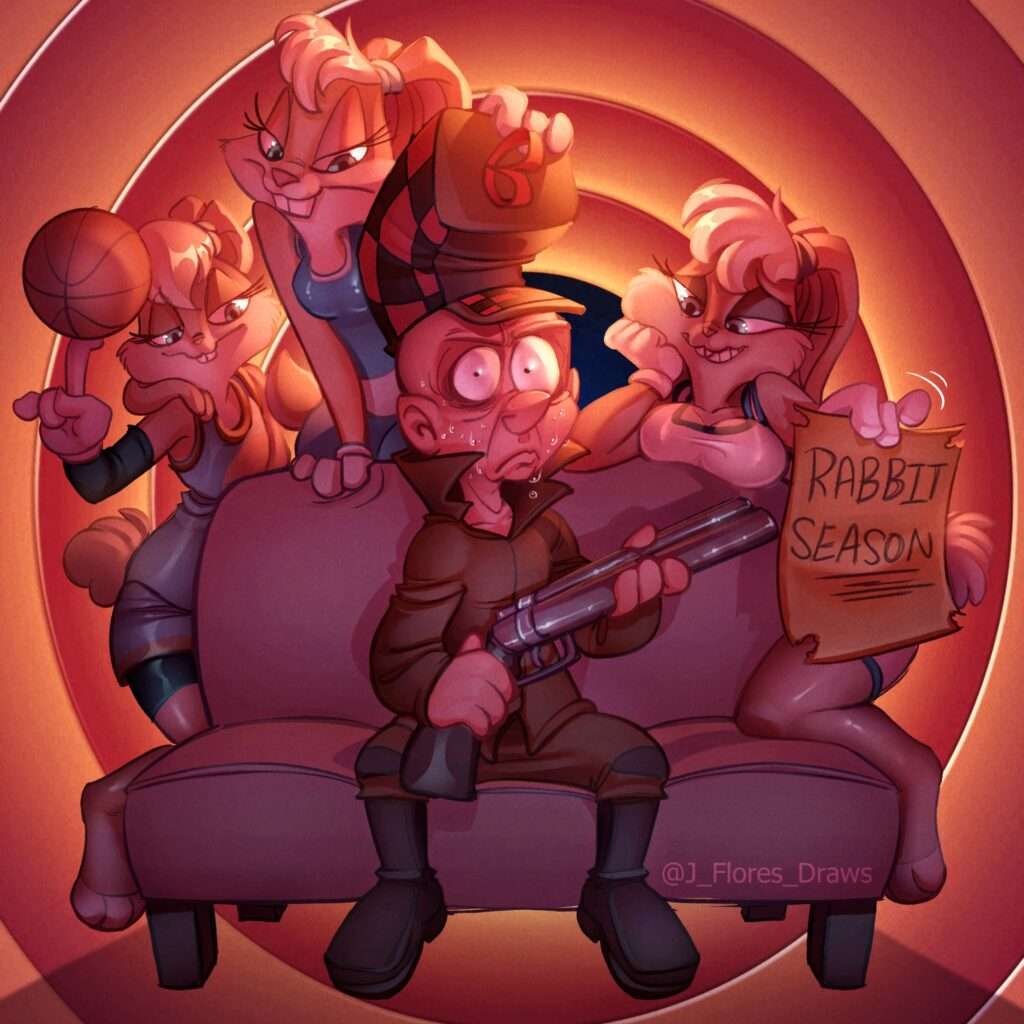 These aren’t the only letdowns in this belated sequel to the Roger Rabbit variation. Entertainment Weekly says Lola Bunny was victim of de-sexualization:

Last week’s EW cover debut of the true Space Jam: A New Legacy first look spurned many (creepy) thoughts about the redesign and rework of Lola Bunny, with director Malcolm D. Lee saying the goal was to make her less sexualized. […]

It’s possible Lee felt, like he did of Lola in the original Space Jam, that the character of Pepe was “not politically correct,” with the filmmaker admitting “at the same time there’s a long history of that in cartoons.”

“This is 2021. It’s important to reflect the authenticity of strong, capable female characters,” Lee previously told EW of the decision to give a new legacy to Lola. “She probably has the most human characteristics of the Tunes; she doesn’t have a thing like a carrot or a lisp or a stutter,” he continued. “So we reworked a lot of things, not only her look, like making sure she had an appropriate length on her shorts and was feminine without being objectified, but gave her a real voice. For us, it was, let’s ground her athletic prowess, her leadership skills, and make her as full a character as the others.”

Wow, they really are that terrified and hysterical, aren’t they? If the political correctness is already that bad, why should we believe Lola’s end result will be as feminine as they say? And since when didn’t she have a voice, or wasn’t capable? I’m not buying this idiocy wholesale as they’re hoping we will. There’s something wrong if the director advocates political correctness, as they hinted he’s done, because if they believe a lady can’t be strong if she’s beautiful and sexy, they are throughly missing the boat.

Based on this, it’s clear WB’s just as consumed by PC as many other leftist-run bastions in the US now. Of course, they’re the studio that filmed the Harry Potter adaptations, and after JK Rowling criticized transgender ideology, Robbie Coltrane was the only one who defended her, while the rest of the cast and crew involved threw her under the bus. So already, this is hardly a surprise some PC mentality was already lurking backstage. I know some of the early cartoons showing Elmer Fudd using blades like hachets may have stopped being broadcast on commercial TV due to concerns over violence in the past, but as noted last year, the hypocritical stance on violence with blades still stands in newer cartoons. Charles Blow is another ideologue who should be ashamed of himself for contributing to an already dreadful atmosphere, and so too is CNN’s Jake Tapper.

Stop doing gender reveals. They’re not cute; they’re violent. All we know before a child is born is their anatomy. They will reveal their gender. It may match your expectations of that anatomy, and it may not. If you love the child you will be patience, attentive and open.