Peter Simeti Goes Bump in the Night With AlternaWeen 2 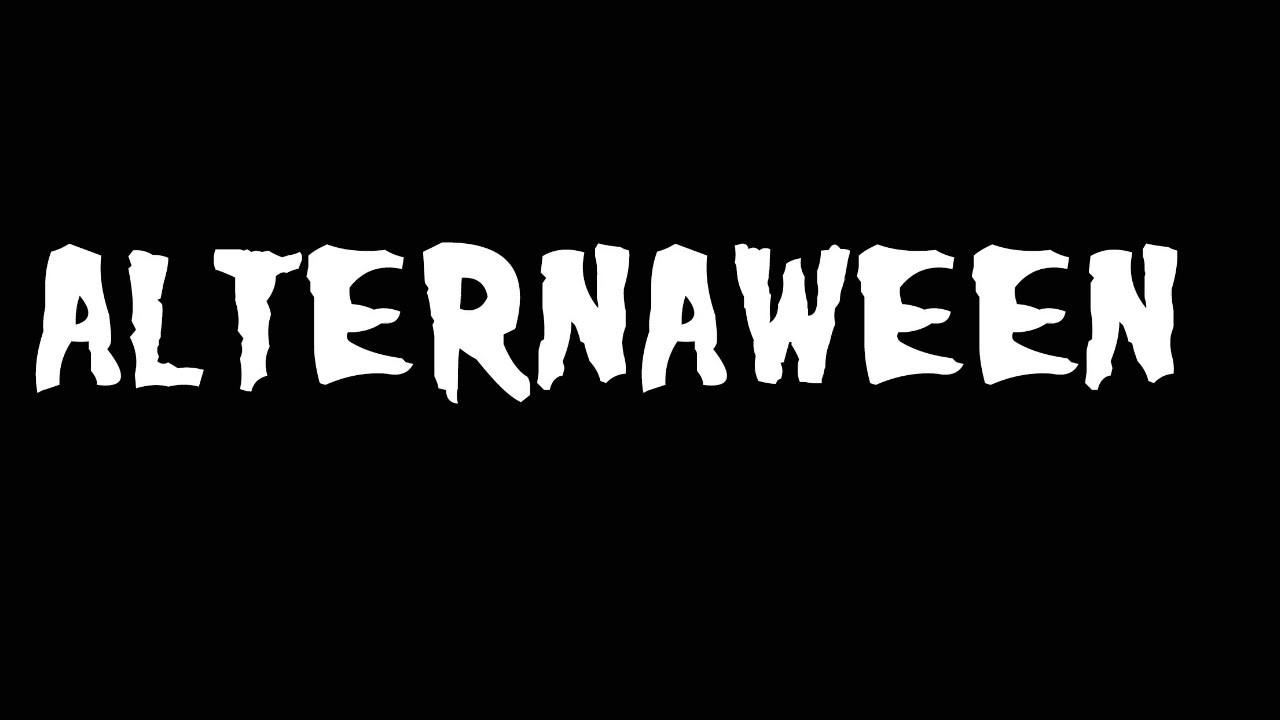 Peter Simeti is founder and editor of Alterna Comics, a 13-year-old indie comic book publisher that has caught lightning-in-a-bottle over the past 18 months. While Image Comics recently shuttered its subscription service, Alterna had to add one because of persistent reader demand. The company has an off-tempo approach to pricing, customer service, and distribution that sets it apart from much of the comic book industry, and has won it ferociously loyal readers.

An Alterna comic is printed on newsprint, costs between 99 cents and $1.99, and has tools to help connect comic book readers with local comic shops. If you buy an Alterna comic and post a picture of it online, there’s a good chance that either the creator or Simeti, or both, will personally thank you for the business – and they won’t give a fig about your politics. If you include the right hashtags, the Alterna online store will offer you a discount.

I spoke with Simeti via DMs over the weekend about his latest crowd fundraiser, AlternaWeen 2, which offers people steeply discounted comics (for as low as 50 cents per comic) that they can give out this Halloween. We chewed the fat about his campaign, wider distribution for Alterna comics, and what lessons the comic book industry can take from philosopher Friedrich Nietzsche. This is an very lightly edited version of that conversation.

(Before we get to the text of the interview, absolute full disclosure: I have a comic book proposal called AUMF currently being considered at Alterna Comics, and Peter Simeti considered and passed on my comic Movie Men. Nobody’s perfect.) 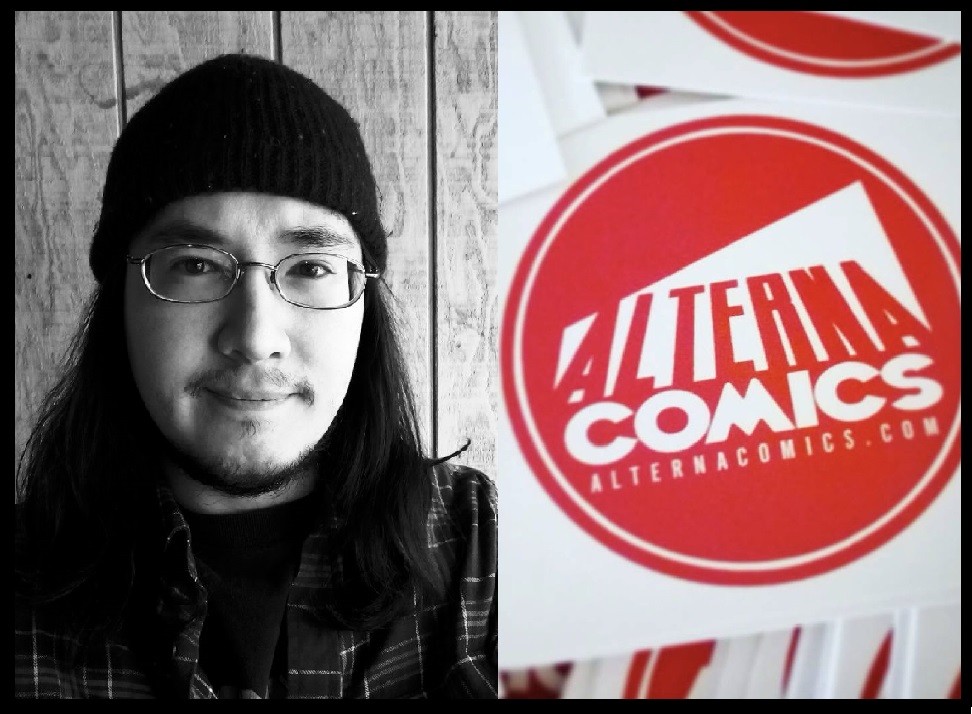 Jeremy Lott: Tales From Neroesville has been pronounced “the best deal for NEW comics on Indiegogo” by a very reliable source at three new issues shipped domestically for $11. Are you going to let Jason Meadows have that or do you want to say that enough of the books AlternaWeen 2 will put out there will be new that you should take his title?

Peter Simeti: I think we might have Jason beat by a mile but it’s OK… we’ll bow out of this one, haha.

Jeremy: Where did you come up with the idea for AlternaWeen, and why is it in August this year?

Peter: The inspiration for AlternaWeen came from Halloween of 2017 when a few Alterna readers were buying a few extras of our all ages comics and using them as trick-or-treats since they were so inexpensive (average cover price around $1.50).

In 2018, we made an event out of it and it did well! So now we’re back again and it’s going along smoothly. It’s in August this year so that we have enough time to get everything out to everyone.

Peter: With AlternaWeen there’s no tricks, just treats! We’ve got trick-or-treat bundles with some deep discounts, new Alterna hats, beanies, and shirts, an exclusive Alterna Comics Calendar, and everything in between. 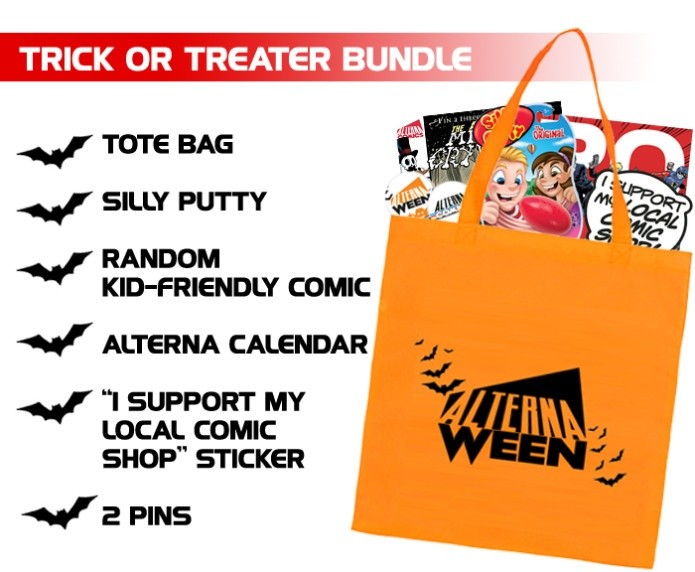 Jeremy: I know people who did AlternaWeen before AlternaWeen. A few of these folks have told me that many, many trick-or-treating children tell them that this is their first ever comic book. What needs to change for that not to be the future of comics?

Peter: Comics have to get in more places. Right now, the comic industry has comics that are for everyone, but the fact that they aren’t everywhere is a big problem. For most people, if it’s not on the shelf, then it doesn’t exist.

It’d be great to see comics in places where kids and families shop. Comics, as an industry, is just far too passive when it comes to getting product out there. We need a little less Field of Dreams and a little more Glengarry Glen Ross.

Jeremy: When are we going to see Alterna comics in 7/11s? Dollar Stores?

Jeremy: Alterna for many years was a one-man show, with you doing pre-press, advertising sales, shipping, and so much more. How has that changed?

Peter: Not much of that has changed. We’ve got Kevin Roditeli helping to sell ads as a sales rep now, but other than that, I’m still running everything else. You need to wear many hats as a small business owner. Mine all happen to say “Alterna” though.

Jeremy: You do all the single issues of your comics, or “floppies,” on newsprint. How would you compare the whole package of an average Alterna comic against, let’s say, the average Marvel comic?

Peter: I think an Alterna title can go toe to toe with any other publisher’s titles. They look great on newsprint and they smell great too, haha. Many readers have also been very happy with the fact that there’s no glare when reading our comics.

Comparing our $1.50 comics to comics that can cost $3.99, $4.99, or higher in some cases, I think readers will be pleasantly surprised to find that they can still enjoy a high-quality entertaining comic book that delivers a great value at a great price.

Jeremy: When you launched the It Came Out on a Wednesday anthology series, you predicted that it would have a short lifespan, given the current direct market’s trend in orders for continuing series. Were you wrong?

Peter: I’m finding that an anthology series generally has a better shot in the current market due to the fact that every issue is accessible for new readers. Whether it’s issue 1, 10, or 100, any issue of the series can easily be someone’s first issue since there’s no major dependency on the issues that came before it.

It’s been nice to see that there’s been a pretty consistent readership for It Came Out on a Wednesday though and that people are enjoying it.

Jeremy: You drew one cover for It Came Out on a Wednesday and do regular sketches to help sell Alterna trade campaigns. Would you like to draw your own comic book at some point?

Peter: I don’t mind drawing covers or sketches, but I don’t have any plans to draw a book. If I had aspirations of becoming a busy writer or artist, the worst thing I could’ve done was start my own publishing company. Besides, connecting with readers is the best part of the job and I wish there were more hours in the day just for that.

Jeremy: In the last year, you have been denounced, boycotted, had creators walk out, and were swatted for good measure. This happened over what I guess we could call your “fan positive” approach to publishing. But you’re still here. Was Nietzsche right that that which does not kill us makes us stronger?

Peter: I think Nietzsche might have also been right when he stated: “And when you gaze long into an abyss the abyss also gazes into you.” It’s important to understand what “the line” is and make every effort not to cross it.

Don’t become what/who you hate — or in some cases, what/who hates you. Similar to some of our favorite comic book heroes. When you see yourself as the hero but you commit acts of villainy, you become the villain. 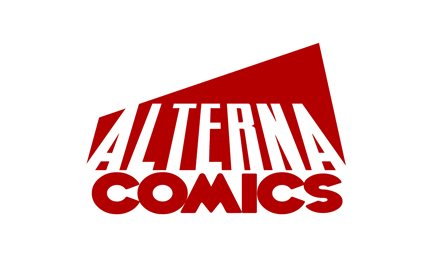