The MOST popular comic articles usually can’t reach the heights of averagely popular movie, TV, music, or politics pieces, so sites that rely on ad revenue—especially as platforms like Twitter, FB, and Google cut into it—have a hard time justifying “niche” verticals.

It’s no coincidence that the most stable comic websites do a lot of clickbait and/or cover a ton of comics-related TV and movies. I ran Paste Comics as the kind of site I wanted to read myself, but unfortunately that kind of site has a hard time paying for itself.

One of my few comforts this week has been reading the outpouring of support from the awesome PR folks I work with at different publishers, who are sad for me, but also sad to lose another decent outlet for comics journalism. It’s at least gratifying to know we were appreciated. 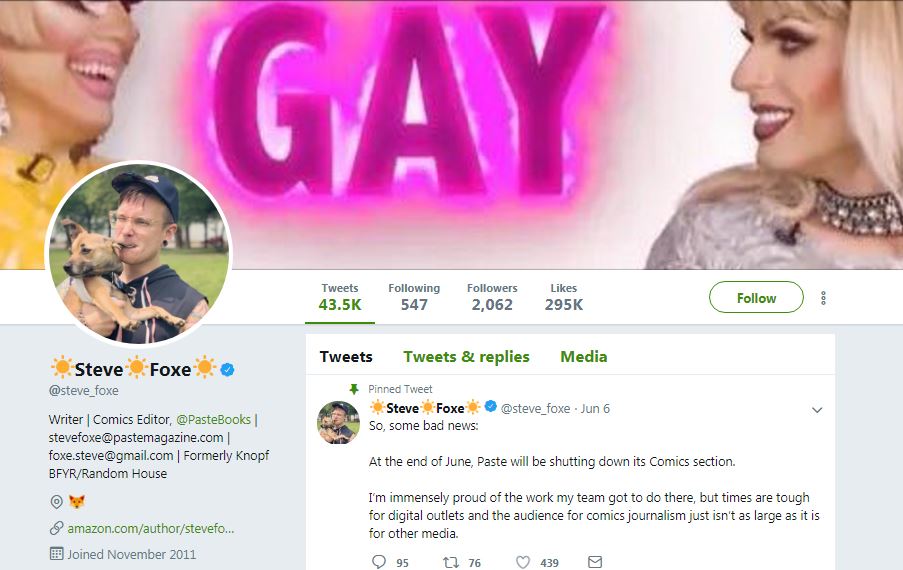 It looks like Paste Magazine is jettisoning their comics division. According to Comics Beat:

It’s a sad day for the industry. Paste Magazine comics editor Steve Foxe revealed today via Twitter that at the end of June, the outlet will shut down its comics section. Although there may still be comics coverage under the books vertical, the section dedicated exclusively to comics — with an editor and staff writers to support it — will no longer exist. This is a definite loss for the comics community, as Paste has built up a portfolio of insightful criticism and news coverage about the industry.

IIRC, they’ve been one of the biggest apologists for poor quality, and that could include politically themed stories. Check out what Paste thought of what Mark Waid’s got in store at Humanoids:

If superhero comics have a responsibility to reflect our real world, then superhero comics featuring teenage characters have more to reckon with than ever before, including the seemingly omnipresent threat of school shootings. Per Education Week’s tracking, there have been at least 13 school shootings resulting in injuries or deaths this year, many of which barely make national headlines now due to how often a tragic event like this occurs. Marvel Comics’ Champions series (perhaps clumsily) tried to tackle this wave of violence in a special issue last year, and now Humanoids’ nascent superhero universe is confronting gun violence in schools head on with Ignited, their first ongoing shared-universe title.

Written by Mark Waid and Kwanza Osajyefo and drawn by artist Phil Briones, Ignited opens on the first day back at Phoenix Academy High, where returning students and faculty are still haunted last year’s horrific attack. Friends and colleagues were lost to senseless violence, and some of those who survived underwent changes—they Ignited, gaining supernatural abilities they barely understand.

The challenging question regarding this project is – what exact angle does it take? Does it make any calls for gun control? If it does, it’s not in the promotional material I’ve seen so far, and if Paste’s comics department won’t comment on it, that just explains why it’s not such a big deal they’re folding it. Waid himself stated:

The events of Ignited are based on real-world tragedies, and we don’t take that lightly. With that in mind, we’ve reached out to kids nationwide—some now adults, because that’s how long this national tragedy has been going on—who have been directly involved in these shootings and given them free rein in our editorial pages to write about whatever they want—their stories, their solutions, their hopes for the future. Their voices deserve to be heard.

But, what if it’s just voices on the left that are heard? What if nobody makes a call for better school security at the entrances to the buildings? And, why does a book about a serious issue come with a fantasy theme? I’m honestly not sure if that’s the best way to handle real life issues. Certainly not if the story comes with a liberal bias. At least the site does admit Marvel didn’t handle their Champions story so well. When political issues overtake entertainment so blatantly, it’s no wonder the politics won’t work any better than the entertainment themes.

And when a site is as tilted against the audience as Paste has been, it’s no loss if they drop their comics section. In my opinion, it wouldn’t be any loss if Comics Beat folds someday also, as they’ve proven to be one of the most dishonest, establishment-supporting news sources around.