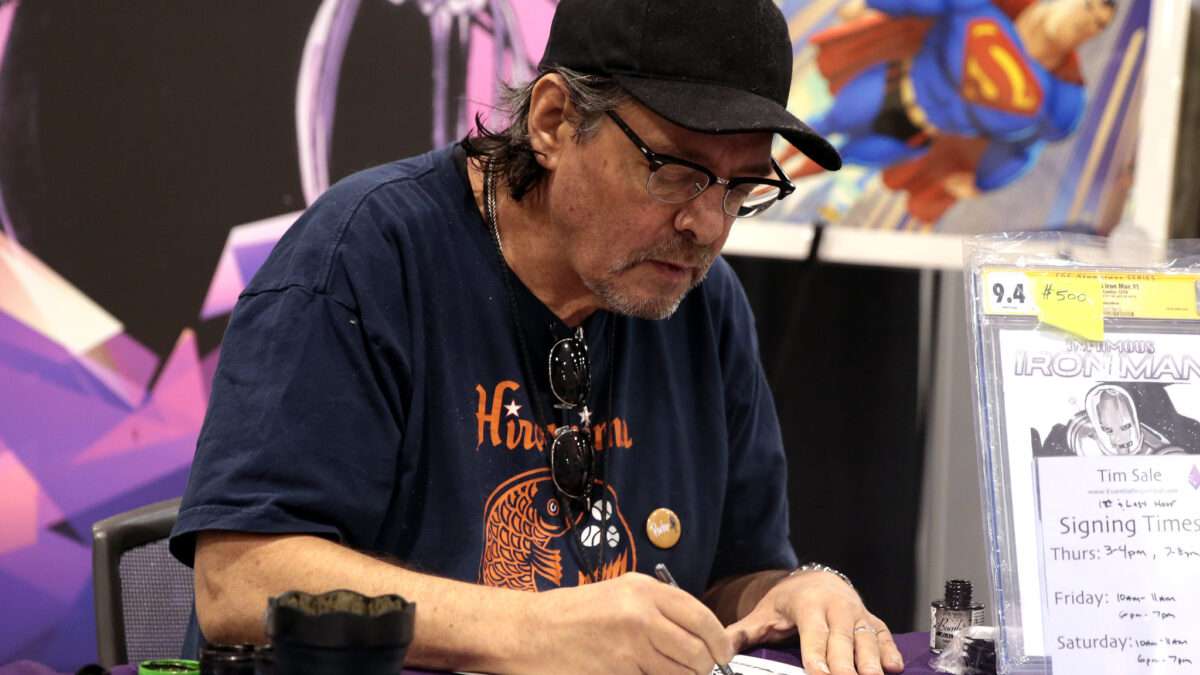 A writer at the Federalist spoke about the artist Tim Sale, who sadly passed on recently, and why he thinks the guy had talent. But this also tells something some may consider surprising:

What’s maybe most amazing about Sale is how little impact he’s had on the industry in terms of overt influence. That sounds like a bad thing, imitation being the most sincere form of flattery. But Sale’s style was so precise, so specific to him, that it couldn’t be imitated or even borrowed from. His artwork feels like a dream come to life; his pencil marks imbue characters with breath. Peter Parker and the Green Goblin seem like they are about to waltz right off the page, but not into our reality where bodies obey physics — rather, into some other plane of real existence.

Depending how you view that part, it’s still got to be a terrible shame Sale didn’t influence comicdom for the better, if you think his stories had potential. I’ve read excerpts of a few projects he worked on, at least a few which were collaborations with Jeph Loeb, a writer who, by the mid-2000s, was beginning to look like somebody whose writings were all style, no substance, though that’s mostly on items the latter did without the former, so I suppose you could argue whatever Loeb did with Sale was among the better items he’d written. 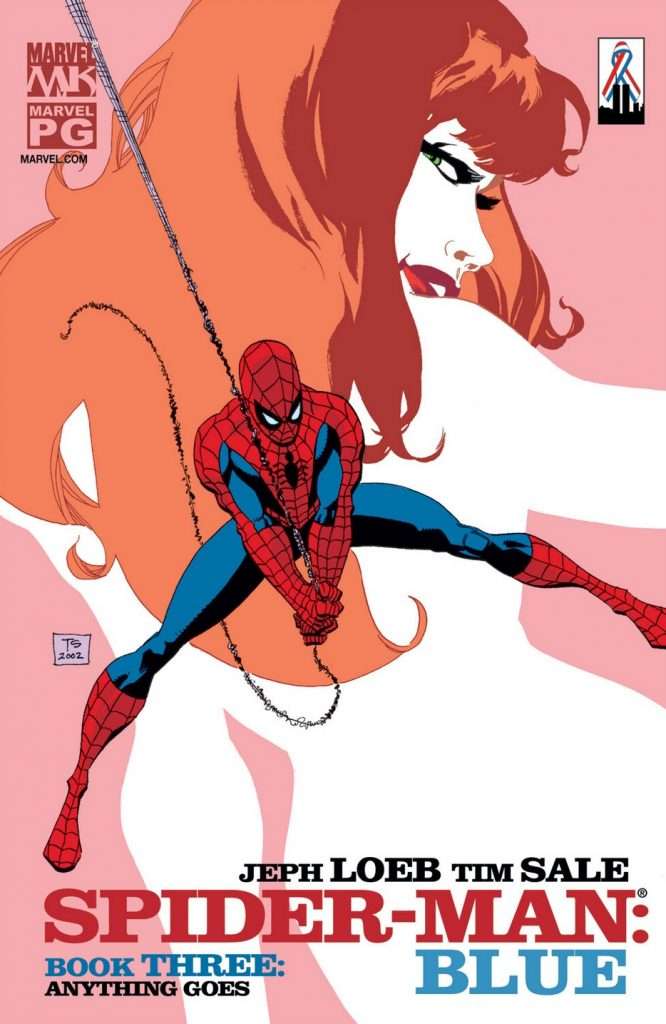 The writer continues to discuss the Spider-Man: Blue miniseries:

That’s one of the reasons “Spider-Man: Blue” is my favorite by him. It’s so full of life, in a story about death. Each stroke of his pencil was laden with epic whimsy and romantic sadness. And his take on Spider-Man was pretty straightforward — the character looked like a normal Spider-Man, instantly recognizable, the way Ditko and Lee had designed him all those years ago, yet somehow completely original. Sale always made every character his own, and converted them into his own visual language.

“Spider-Man: Blue” is the tale of an older Peter Parker, now married to Mary Jane, remembering his first love and how they finally got together. For the uninitiated, Peter’s first and arguably truest love was Gwen Stacy who was killed by the Green Goblin. Peter is recording the story of their romance on tapes in the attic, but because it’s a true Spider-Man story their romance involves just about every one of the major villains from his rogues gallery. And Sale nailed the look for all of them. But what is even more impressive is how he got the more mundane characters so perfectly. Using the most subtle implications of shape and form he makes the reader see Gwen Stacy’s soul and understand why losing her was so tragic.

On this, I’ll say that from what I looked at from this Spidey miniseries, it  may be one of the last readable books turned out by Marvel in the early 2000s. (Although the 6-issue length could be reason to worry, based on how the mandate imposed when Brian M. Bendis came around wound up ruining a lot of mainstream storytelling for the sake of trades.) Thank goodness that, as a self-contained story, it’s not connected with the editorial mandates Joe Quesada and Bill Jemas imposed upon the flagship Spidey series, where Mary Jane was kept away from Peter, before being brought back for what ultimately became a most catastrophic direction. 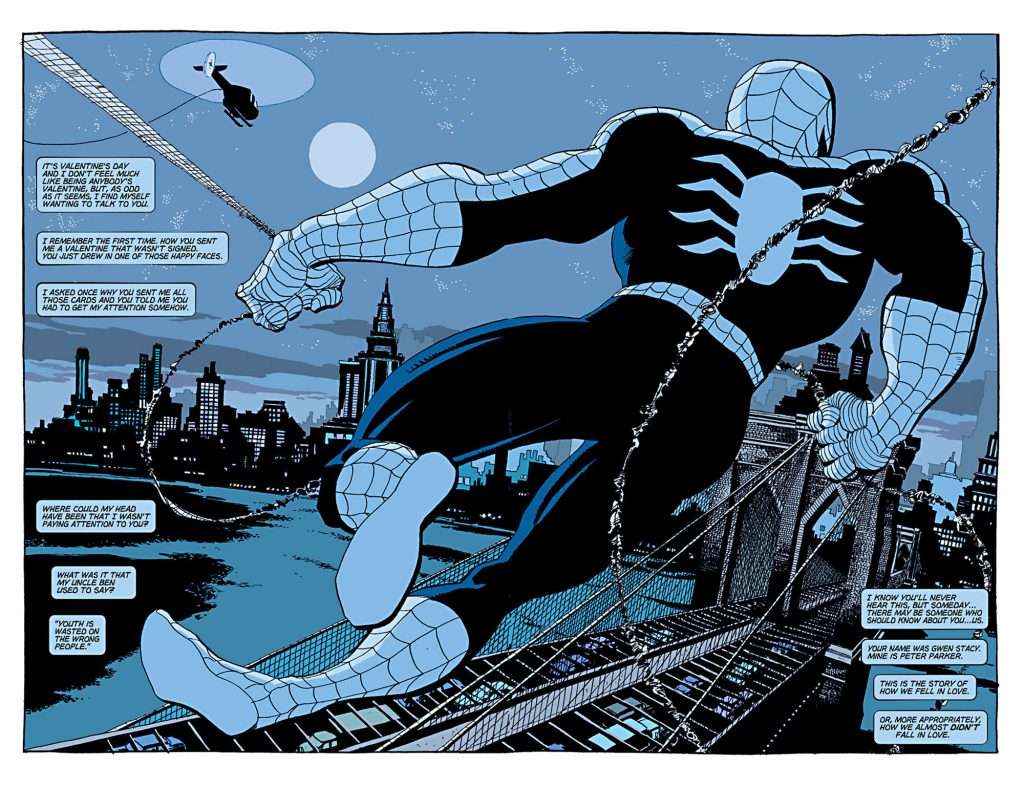 Yet that’s exactly why it’s a shame that, at least a year after Blue came to a close, its impact was dampened by the serious harm Quesada, along with writer J. Michael Straczynski, brought upon the flagship Spidey through the Sins Past storyline, which saw Gwen made out to look like she’d slept with Norman Osborn behind Peter’s back (and supposedly gave birth to twins this way), and Mary Jane was made out to look like a liar who’d withheld information from Peter all these years. Which flies in the face of the more respectable vision laid out by Sale. One can only wonder what he thought of the horrific abuse heaped upon Spidey’s world by Quesada and JMS. It’s a shame there’s only so many contributors to the field who’ll say absolutely nothing because they’re terrified of blacklisting. Even though the mainstream’s already collapsing and hardly makes a recommended place to seek employment. 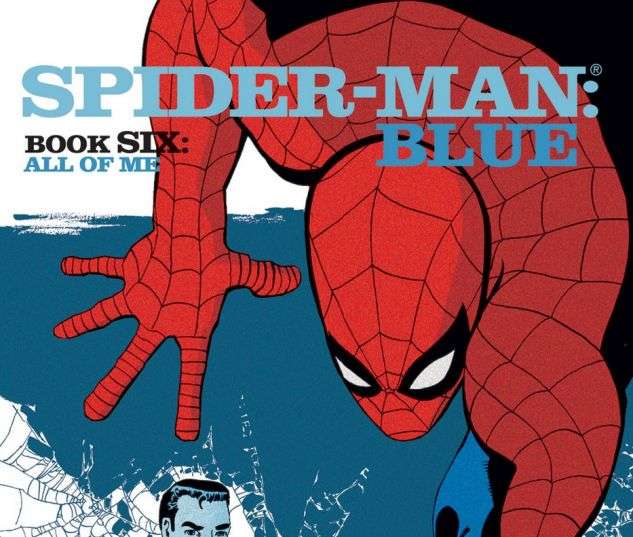 Thank goodness Sins Past was mostly reversed of recent, after C.B. Cebulski came aboard as EIC, though he hasn’t proven a good replacement for Quesada and Alonso in the long run, nor for Marvel as a whole. So at least Sale lived to see a wrong slighting his past work reversed.

Sale was a pretty talented artist, and the projects he’d done for Marvel and DC did show he was good at his trade, so it’s definitely a shame he’s gone. But if he had almost no influence on the comics industry, recent developments are exactly why it’s no surprise at all. Who among the PC crowd running the store now truly respects their predecessors?