I don’t know if Alan Moore’s truly left comicdom, as he’s said he intends to, but a 2017 interview turned up on a blog dedicated to his writings, translated from a Brazilian paper, where, not unlike Martin Scorsese, he takes a dismissive stance on the medium, only in Moore’s case, he makes a statement that’s extremely galling:

What was the impact of popular heroes comic books in our culture? Why are people fascinated by alternative realities?

I think the impact of superheroes on popular culture is both tremendously embarrassing and not a little worrying. While these characters were originally perfectly suited to stimulating the imaginations of their twelve or thirteen year-old audience, today’s franchised übermenschen, aimed at a supposedly adult audience, seem to be serving some kind of different function, and fulfilling different needs. Primarily, mass-market superhero movies seem to be abetting an audience who do not wish to relinquish their grip on (a) their relatively reassuring childhoods, or (b) the relatively reassuring 20th century. The continuing popularity of these movies to me suggests some kind of deliberate, self-imposed state of emotional arrest, combined with an numbing condition of cultural stasis that can be witnessed in comics, movies, popular music and, indeed, right across the cultural spectrum. The superheroes themselves – largely written and drawn by creators who have never stood up for their own rights against the companies that employ them, much less the rights of a Jack Kirby or Jerry Siegel or Joe Schuster – would seem to be largely employed as cowardice compensators, perhaps a bit like the handgun on the nightstand. I would also remark that save for a smattering of non-white characters (and non-white creators) these books and these iconic characters are still very much white supremacist dreams of the master race. In fact, I think that a good argument can be made for D.W. Griffith’s Birth of a Nation as the first American superhero movie, and the point of origin for all those capes and masks.

Well this is certainly disappointing he’s saying something almost like what Fredric Wertham might’ve said in his since discredited writings on comicdom. All, I presume, because Moore’s fed up that he’d been cheated out of too many writings by the company bigwigs? He’s not going about it the right way if he takes out his anger upon any component of comicdom and science fiction. 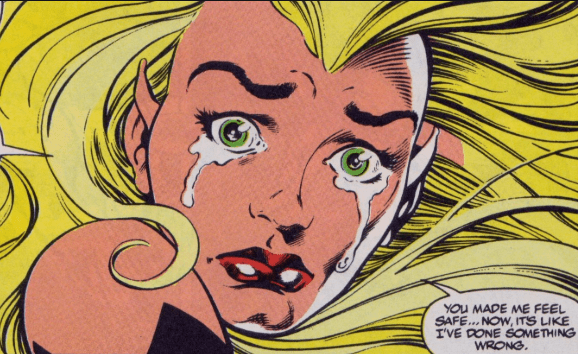 It may be overlooked by some, but early in his career, Moore did write at least a few superhero stories for Marvel’s UK affiliate in the early 80s, like Captain Britain’s early adventures in a publication called The Daredevils (which also reprinted some Daredevil stories by Frank Miller), and he was also the co-creator of mutant Roma girl Meggan in Mighty World of Marvel #7 in late 1983 with fellow UK native Alan Davis, himself a talented artist with an impressively cartoony style. Chris Claremont, also from the UK, would later make most charming use of Meggan as a cast member of the 1988-98 Excalibur series, where she would marry Captain Britain at the end of the run. I think Moore also has a handful of Night Raven stories to his credits. Does Moore now reject his stories for UK publications along with the rest? Well it’s a real pity he’s taking it so hard, to the point where he’d say something so alienating, and he makes everything worse by hinting he thinks whites literally comprise too many cast members, much like the social justice advocates in the US.

He’s at least half correct about the situation with creators today: unlike in the 70s, when Siegel and Shuster fought for recognition as the co-creators of Superman, I doubt many now would back them up, and Kirby was only half successful in reacquiring the rights to his art drafts during the mid-80s. But Moore’s analogy of superheroes to a white supremacist vision is insulting to those past veterans too, because all the aforementioned 3 were white, as were their famous creations like Superman and Captain America. So too was the late Len Wein, co-creator of Swamp Thing, Moore’s most notable work in an ongoing series during the mid-80s. And I think a terrible shame Moore went overboard, because, whatever problems he had with any publishers years ago, his work on Marvel UK and the Swamp Thing from the 80s still holds up very well, and now, more than ever, he’s forcing everyone to take his past work with a grain of salt.

So if he does ever truly retire from comicdom, it’ll be for the best, as he’s not doing any favors for the medium’s reputation if he keeps up that attitude. He has written a few novels, and maybe he’d do well to just stick with that for the future. Though it’d be best of all if he didn’t talk about comics again so long as he retains his denigrating positions.