A writer at Cleveland magazine, who only recently got into comic reading, wrote about a notable specialty store in the city, and tells why or how he got into the habit:

A minor twist of fate brought me here. I came late in life to comics. My wife, Delia, had read them for years. I didn’t until fall 2018 when I began working on a profile of comic book writer Brian Michael Bendis for this magazine.

Bendis had just taken over writing Superman, and curiosity drove me to delve into the character’s back story. I read books about how Superman and the modern superhero comic were both created in Cleveland, and went deep on the Superman comics themselves. I found something special in those pages, a love I still find difficult to explain. 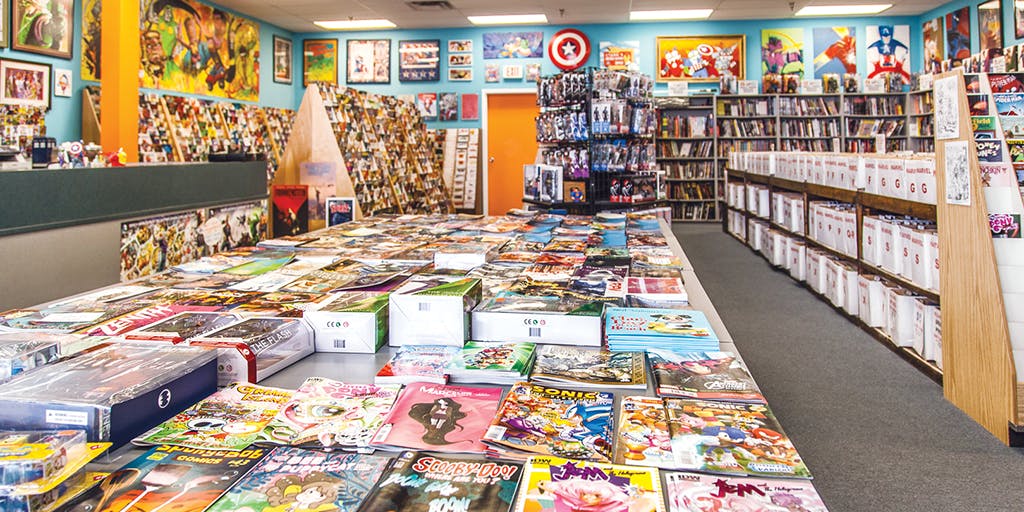 Bendis is why he got into this? It’s always the wrong people cited as an influence. And if the writer’s only reading the newer stuff, as the following suggests, I’m not sure what he means by “love”:

“Hi Sheehan,” he said, like he always does, but this time through his mask. “How you been, man?”

I lied and told him I’d been OK. He didn’t pry, and instead reached into the file folders and pulled our comics — Action Comics No. 1021, Lois Lane No. 10, Aquaman No. 58, Superman’s Pal Jimmy Olsen No. 10, and some others I don’t remember — and laid them on the countertop.

Seeing them, I thought: How many times have I stood here? How many times had I been excited to read stories like these? I picked them up, paged through to glimpse the colorful illustrations, held their weight. They were small, very ordinary things. But they made me feel normal for the first time in months.

I don’t know about the Jimmy Olsen issue, but that Action Comics issue is certainly one of the newest, and the Lois Lane issue must surely belong to the newer series written by the overrated Greg Rucka. The Aquaman issue is likely also new. In that case, I’m wondering why such writers never seem to research and write about the older stuff? It’s just hugely disappointing how they always go the easy route, profiling the most obvious choices along the way, all because Bendis is a Cleveland native. What’s so great about Bendis that isn’t so great about Louise Simonson, who’d worked on Superman in the 90s? Bendis has, in a short amount of time, lowered the bar on the Man of Steel’s reputation in comics, and it may not be possible to mend it at ease before the possible collapse of DC that could be coming sooner or later.

It’s great to say you’re a Super-fan, but citing a writer as awful as Bendis suggests the journalist’s choice for which writers’ work to read is very narrow, and does little to ensure they’re really in this out of dedication to what made Superman and other comics work best in the past.
Originally published here.