Remember the iconic trash compactor scene in Star Wars (aka ‘A New Hope, aka Episode IV?) Well, it turns out that the name of the dianoga creature was Omi. 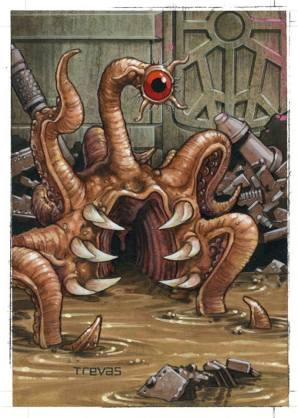 On the day of Princess Leia Organa’s rescue from the Death Star, Omi is consuming a large hunk of rotting meat when Leia, Luke Skywalker, Han Solo, and Chewbacca flee into the garbage chute. Enacting the belief of her people, Omi pulled Skywalker into the water, “baptizing” him, after she felt that he too was in “submission to It” before releasing him. Omi’s actions startled Luke and his companions. During the struggle, Omi sustained a wounded tentacle when Han fired upon her with his blaster. After “baptizing” Luke, she then headed deep underwater before the compression cycle could begin.

“The Baptist” is a short story written by Nnedi Okorafor for the anthology From a Certain Point of View. The story focuses on the dianoga in the Death Star’s garbage chute.[1]

So now, Han, Leia, and Luke are the monsters who wounded a defenseless sentient creature over a matter of cross-cultural misunderstanding.

Next Lucasfilm’s “Revisioneers” will tell us the tale of the poor Mynocks, who were only trying to bless the Millennium Falcon canopy with a gentle kiss.