An article was recently published with comments from Daisy Ridley that SJWs will undoubtedly use to attack the fans once again.

Daisy Ridley has been left scared by ‘Star Wars’ fans turning up at her house.

“There are things [about being in ‘Star Wars’] I don’t like talking about, because it’s not the good side. People turn up at your doorstep, that’s scary.

“And I’ve been followed, that’s a bit ‘woah’. But in terms of the actual experience?

“I had the best time. And now I’m out of it, I feel like I want to work really hard and honour the decision of the people that cast me.”

These quotes make it sound as though she’s talking about the fans in general, and many will attempt to erroneously connect this with older fans or the imaginary “alt-right” fans.

But unfortunately for SJWs, I’ve done Tatler Magazine and Tulsa World’s research for them.

Because the people known to have harassed Daisy turned out to be Reylos that were angry she wasn’t dating Adam Driver.

It turns out, back in August 2018, Reylos were screaming mad that Daisy Ridley brought her boyfriend on set. 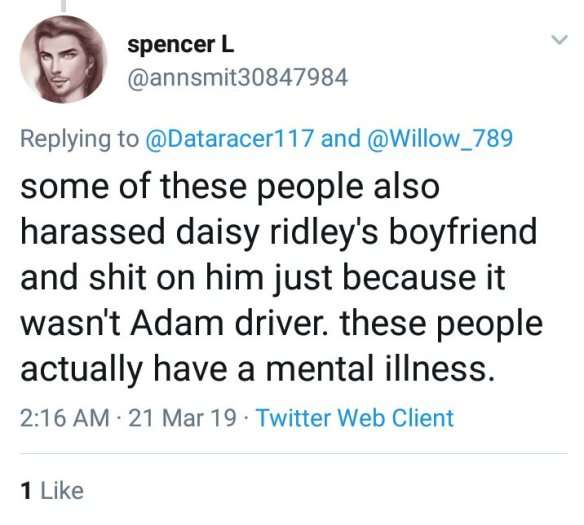 A Tumblr user by the name of Blue Chandrila wrote the following now deleted post: 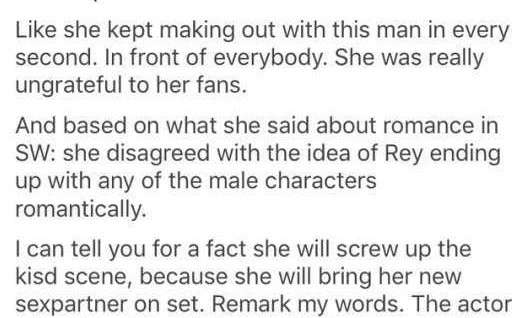 Two of the images that the Reddit user posted are as follows:

Reylos have previously lashed out at Daisy Ridley for being a princess of privilege, and who may or may not have direct connections to the late Alec Guiness.

All of this could have played into Daisy’s decision to leave social media. But the legacy media pushed an incorrect narrative blaming long time fans for it instead. Actual reality told an entirely different story however, and I’ve written about that here.

So my guess is that 40 year old “dude bros” that build MPC model kits in their garages probably didn’t show up on Daisy’s door step.

STAR WARS' DAISY RIDLEY is being TORTURED by TUMBLR LUNATICS!!! [REYLOS SHOW UP AT HER HOUSE!!]