Nerdette Speaks: “My Dance With The Devil Herself”

Waking up in the middle of the night is nothing new for me. I wake up, go back to sleep, like any normal person, but not last Thursday. No, last Thursday night, September 12 began a nightmare I never expected, nor deserved.

I woke up to a knock. Not just any knock. You know that pounding on your door when you instantly know who it is? That was signature pounding of law enforcement and something was wrong. I was scared, but going through my head was “Who was hurt? Who needed help?” Once I was ready, I opened the door. Never did I expect them to say they’d received a call to check on me because they thought I was dead. I instantly thought it was a cruel joke! Who would ever think I’d ever hurt myself or family? I’m one of the happiest people I know! LOL  I’m always trying to help others, so why would I hurt myself?

Something didn’t add up.

Until the texts began. I could hear my phone start going off as I talked to the police. Who needed me in the middle of the night? I was acquainted with these police officers. They knew me as a person, had they not.. my door would have been busted down. Literally nothing was adding up to me. I couldn’t understand who would call a well-check in for such an obscene reason. The cops left after I assured them everything was, and would continue to be, perfectly fine.

Then it was time to see who needed me in the middle of the night. That’s exactly when I knew. All my information that I’ve tried to keep personal as an online content-creator had been uncovered. From my job, to my family members, and even a time I was arrested for having a bowl on me. This information was accompanied with an obvious message to stop. Stop speaking out against my recent escapade. Even a threat of using my login information. And I believed it all. 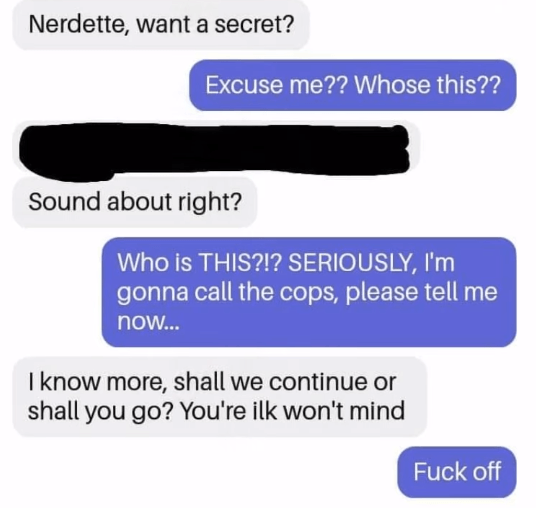 I was shaking. I didn’t know what to do. I ran, I literally hid. I tried reaching out, tried being cryptic, but was so afraid of hurting anyone else, so I hid. I packed up my family and went to stay with a friend. I was scared. That’s a feeling I never want to feel again.

Looking back, had I been more calm I think it would have been okay to stay at my home, to not just believe they knew my logins, but ask for proof. Yet in my hyper focused mind, I didn’t think of that. I thought by not nuking them, I put everyone in jeopardy I had ever spoken to privately, and I would never let that happen to my friends.

I did exactly what they wanted. They won. They silenced me, they scared me away. And I hid for nearly a week before I finally decided to reach out, and finally to make my video below explaining what had happened.

The worst part of all this is knowing my information is still over my head, my past life, my high-school, my college days… it’s scary. To know someone has that much power is a scary thing, hence why I’m taking precautions moving forward.

So I am so sorry. I never, ever meant to worry anyone. I never meant to make anyone wonder what happened, but please understand, I had to think about those around me, I had to put myself on hold, not knowing if I’d ever get back to just being me again.

And I hope you understand me still being a little vague with the details. I will share more soon, but right now I’m trying, slowly I’m trying. Thanks for all your support.