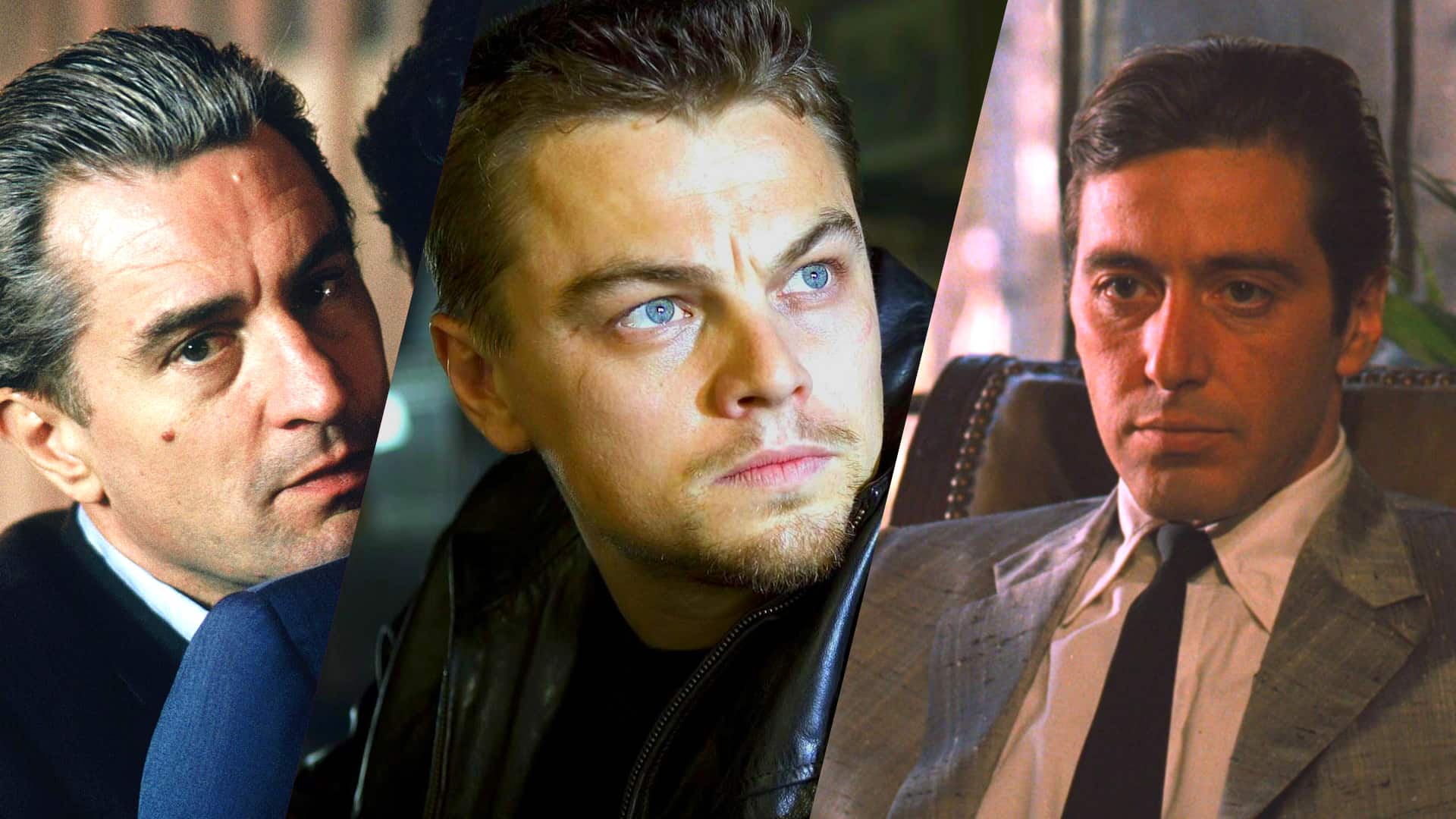 The Mafia remains a fixture of American movies and television, long after the peak of its power.

That’s because for a span of 50 years in the early-to-late 20th century, the mob exerted tremendous influence – not just on the street – but in unions, legitimate businesses, and even government. The mark it left on the culture has been a long time wearing off.

As  a result of Hollywood movies, the image most people have of mobsters is of suave yet brutal leg-breaking thugs. But random, extreme violence is no way to run a business. In their heyday, gangsters would use force only when necessary to make a point – and an example. If all your marks are dead, or if the cops get involved, you don’t get paid.

So a major factor in the mob’s downfall was the emergence of upstarts within and new competitors without who disdained the old ways. The drug-fueled chaos of the 70s and 80s spilled into the general populace, leading to louder calls for government crackdowns.

But nature abhors a vacuum. Somebody had to fill the power gap left by organized crime’s decline. In what may or may not be an ironic twist, depending on your outlook, that vacuum came to be filled by the same feds who’d helped take the crime families down.

You can get the dirt on Joe Kennedy and Operation Mongoose on any Boomer-tier conspiracy site. We’ll set past collaborations between the government and the old mob aside and focus on the real inflection point that led to our current situation. That was Bill Clinton’s election as president in 1992. 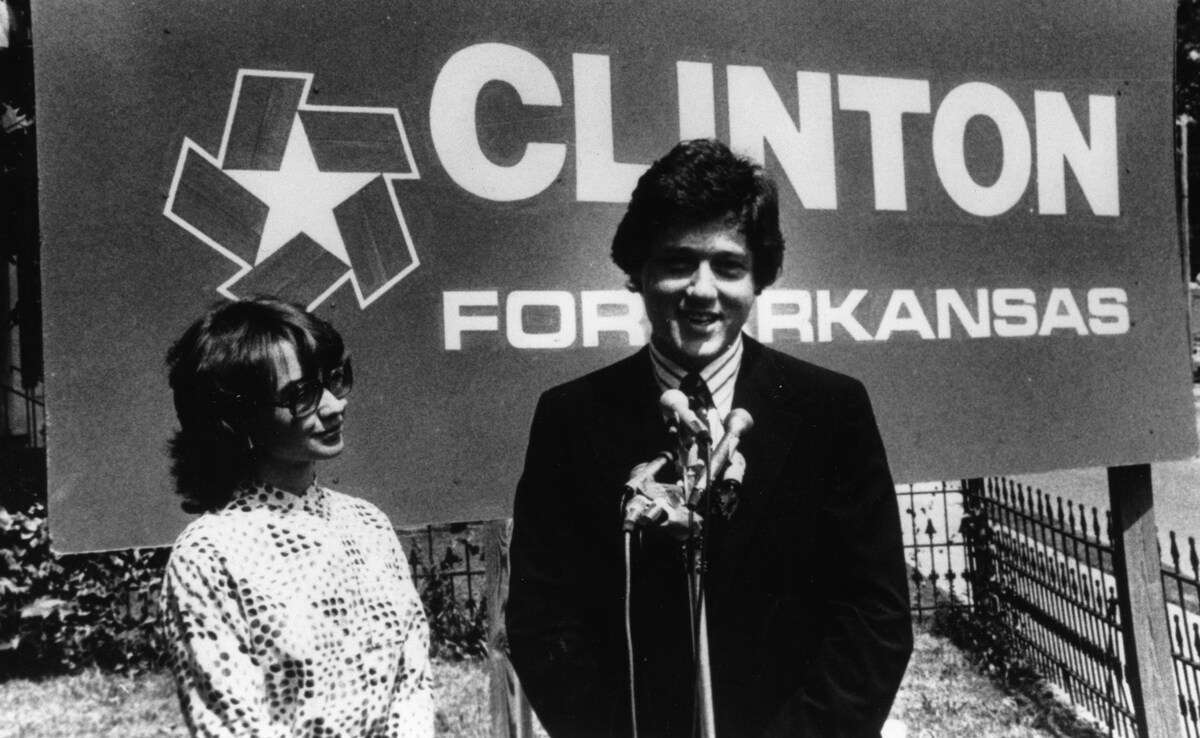 Clinton had run Arkansas like the dirty sheriff of a backwater hick town. He and his organization brought southern crooked cop politics to DC, and everybody in the place has been on the take ever since.

If you doubt me, recall that loan sharking has ever been the mob’s calling card. It’s a steady source of income on the street, far more so at the national level. Whose administration saw the federal government become the single largest holder of student loan debt?

Another bread and butter revenue source for mobsters is extortion. It was the Italian mob who raised the protection racket to an art form. Above and beyond the “Nice store you got here, shame if something was to happen to it” image from pop culture, mafiosi really would protect their extortion victims from other criminals.

Because once again, old school gangsters understood that there’s a right and wrong time and place for violence. Make a habit of dishing out excessive punishment, and sooner or later your marks will learn that the consequences of cooperation and resistance are the same. At that point, they’ll be as likely to go to the cops as they’ll be to pay up.

This is a conundrum our corrupt elites are running into. They favor similar excess cruelty as the cartels that turned Miami Harbor into a bloodbath 40 years ago, but for different reasons. Medellin soldiers wanted to prove they were more ruthless than the competition. It was still business to them. Our rulers, on the other hand, are devotees of a fanatical cult that demands blood sacrifice.

Our elite’s other main point of departure from the old mob is that the latter was driven by hyper-masculinity. In contrast, the Death Cult is characterized by feminine hysteria. The Cult has no code of omerta. Instead, it practices a form of moral extortion to obtain its victims’ compliance.

The transaction is always implicit, but in exoteric terms it goes like this: “We control access to all government, corporate, and entertainment positions. If you want in on the action, you have to mouth this year’s ritual invocations and display fealty to the current sacred cows on demand.”

Case in point: near-billionaire author James Patterson. We last saw him noticing Cult behavior in oldpub and calling it out. If anybody could take the Brandon Sanderson route and tell the cultmob to buzz off, it would be Patterson. Yet here he is performing a 2015 style ritual apology. 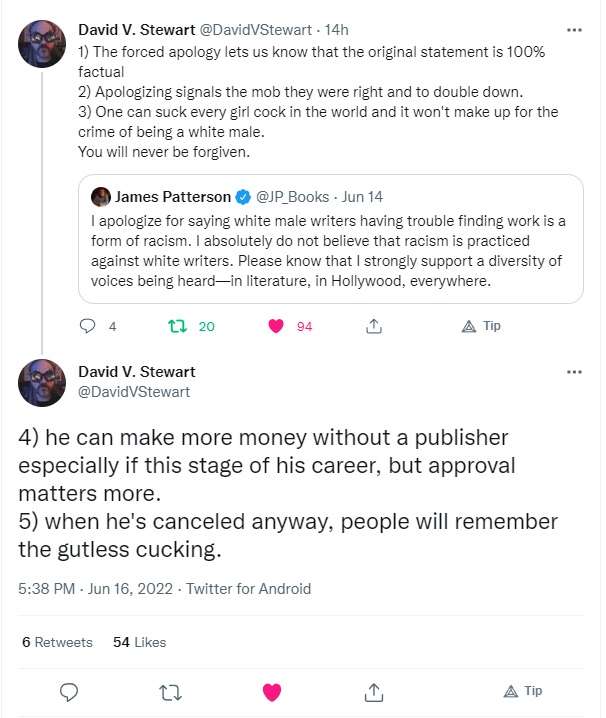 One figure that’s remained consistent for decades is that the Death Cult’s active membership ceiling is about 20% of the population. It’s no great revelation that a determined minority can exert outsized influence. The mafia did it for years. Until they no longer could. Which happened when they let greed and wrath get the best of them, leading to a massive public backlash.

Is the ruling Death Cult in for a similar crackdown? Signs such as growing grassroots protests against CRT, infanticide, and child grooming may indicate the affirmative.

In the meantime, the best step you can take – for the sake of your soul, if nothing else – is to stop giving money and attention to Cult media that hate you.

Instead, support creators who want to inform and entertain you.