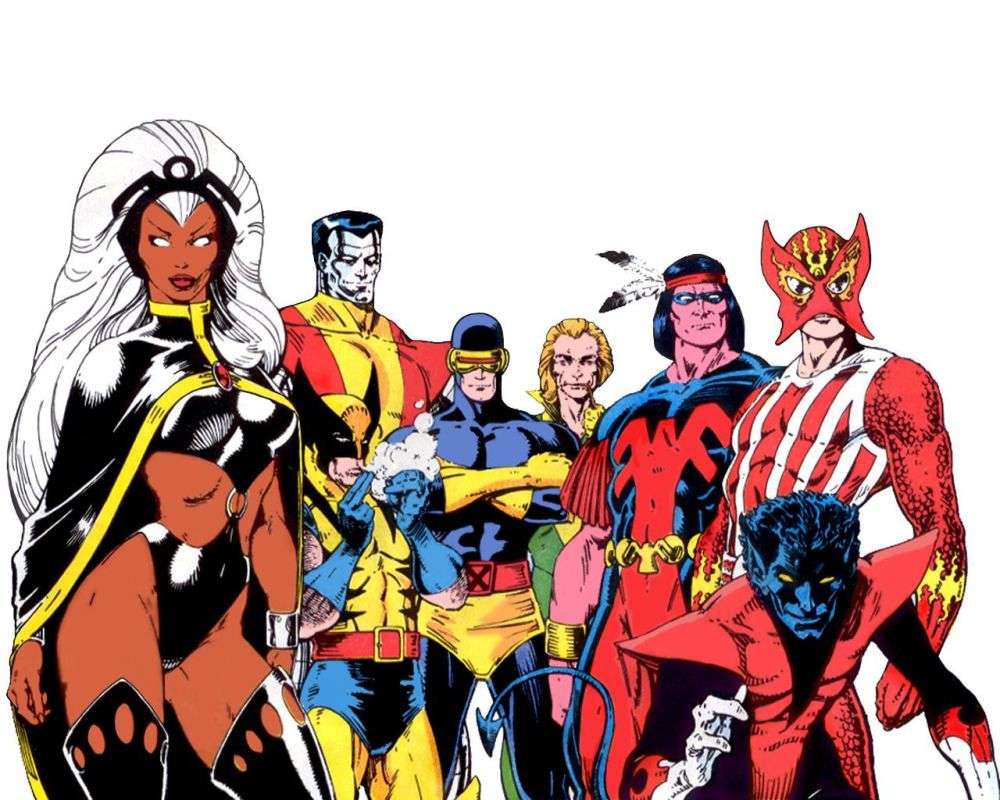 The Film Magazine, clearly a most left-leaning, self-important publication, wrote one of the most insulting, distorted items to date claiming that movies based on comics like X-Men “straightwash” the characters:

Things change in adaptations – outfits are modified, origins tweaked, sometimes even superpowers are added or subtracted – but characters’ sexualities are often so intensely a part of who they are that taking them away is undoubtedly detrimental to their representation. What would Spider-Man be without his pining for MJ or Gwen? What would Batman be without his flirtations with Catwoman? The comic books they’re based on are filled with gay, lesbian, bisexual and transgender characters. But, while generally gay, lesbian or trans characters have just been flat out avoided, bisexual characters have been straight-washed into oblivion.

The writer presumably hasn’t seen where Marvel movies are going lately, what with the Eternals film going the gay route, and the next Guardians of the Galaxy sequel looking to follow suit. What may have been the case before is less so now. And it’s only since the late 80s when mainstream started to slowly add LGBT characters more noticeably to their products, almost always presented as “normal”, and nary any questions asked whether it’s a healthy practice, or whether it’s a good idea for a practitioner to shun the opposite sex and not learn how to relate to the opposite sex properly. And whatever stories have come down the road since involving homosexuality have been far more for political propaganda in the mainstream, unlike most foreign films, where it’s not always exploited for the same. That said, what follows in this puff piece next is stupefying:

From the start of the modern era of comic book movies, canonically bisexual characters have been dumped into the wasteland of being depicted as straight. The “X-Men” comics, for example, have always been political stories – Stan Lee based Professor Xavier and Magneto on Martin Luther King and Malcolm X – but under the tenure of Chris Claremont, the stories dovetailed into addressing the oppression he saw en masse: that faced by the LGBTQ+ community.

Claremont wrote in the 80s, during the AIDS crisis, and his stories followed similar routes. Rogue is one of the central heroes of the original X-Men trilogy, and yet for the three films she is only ever presented as straight. Much was made about how Ian McKellen suggested certain scenes in X2 allude to “coming out”, and yet the sexualities of the canon characters remained ignored. This is even more interesting given that Rogue actress Anna Paquin is bisexual, and the director of X-Men and X2, Bryan Singer, is also bisexual, yet Rogue is reduced to someone pining for a boy. Notoriously homophobic director Brett Ratner, brought in to helm the third film, even forces a pointless love triangle for her, Rogue being pined after by both Ice-Man and Shadowcat.

Strange, I don’t think it’s ever been mentioned Singer, who was recently blacklisted in Hollywood over sexual abuse accusations, is bisexual, although Ratner was called out by the leftists a decade ago for use of a slur, yet he apologized, but clearly it makes no difference to SJWs. And yes, Paquin is reportedly bisexual. But what’s claimed about the fictional characters portrayed in the films is some of the most insultingly distorted slop I’ve ever read, since it was established years before, around the early to mid-90s, that Rogue had once been in love with a boy named Cody Robbins at age 13, and when he kissed her, she’d unintentionally rendered him comatose, causing her a trauma and leading her to wear modest garb to avoid direct accidents like that again. I own a trade paperback of 2 Gambit & Rogue miniseries from 1993-95, where it culminated in Cody passing away because the villainess Bella Donna Boudreaux had him kidnapped from a hospital where he’d been kept, but his ghost assured Rogue he wasn’t putting any blame on her. And this magazine has the gall to ignore that for the sake of their agenda? How shameful. As is any reworking of Kitty Pryde in the film to lesbian, before the comics did it so insultingly.

The argument could be made that these are films aimed at children and a large mainstream audience, and that in the early 2000s having two prominent bisexual characters would have been hard to do. But, as the world has changed, the fact that the X-Men films stuck to borrowing from LGBTQ+ culture without properly showing it becomes all the more troublesome. It extends further than just the mainline films, too. R-rated swear-fests like Deadpool and Deadpool 2 don’t offer much in the way of showing people.

No, the films are anything but kiddie stuff, but the way they’re insisting it’s such a big deal is utterly frustrating, because it demonstrates how, if homosexual culture is what they care about, then it’s all they’re going to care about. And you wonder why these kind of movies never emphasize foreign cultures like Romanian, Peruvian and Serbian customs, whether it be song or dance or what meals they like to eat most.

In the comics, Deadpool is an out, proud and extremely loud pansexual character flaunting his sexuality at any chance he gets. The first film opts, instead, to offer a love story of him trying to cure his own cancer to be with his love Vanessa. Despite Ryan Reynolds being perfect for the role, and having a very sex-positive attitude – a funny scene of him being pegged for International Women’s Day is a highlight – the first Deadpool film still presents the character as straight. Even in the sequel where Vanessa is unceremoniously killed in the opening act, the film becomes a long meditation on loss and Deadpool’s pining for his heterosexual love.

Deadpool is never shown as anything other than straight. Flirting with men sure, but never expressly showing himself engaging in sex with men. Given that the film is excessively violent, and filled with bad language, showing Deadpool having sex with a man would not be out of the realm of doable and certainly negates the excuse of avoiding such to reach large family audiences.

Ahem. It was only about a decade ago that this “pansexual” propaganda first turned up, as announced by writer Gerry Duggan on social media in 2013, yet he later erased his statement. What’s their point? This isn’t very old as they want everyone to think. But what they’re whining about is insulting in the extreme. As is their distortions of Wonder Woman, which is also the subject of this puff piece:

The rival to the MCU, the DC Extended Universe, is not much better, despite a rich history of bisexual characters to choose from. One of the cornerstones of the DCEU is Gal Gadot’s Wonder Woman, first introduced in Batman v Superman: Dawn of Justice. Diana Prince has gone on to star in two versions of Justice League and two solo films. Her first solo film, Wonder Woman, plays out like an epic war story romance, with director Patty Jenkins opting to tell a story of compassion and love during World War I. Diana is shown to have been raised on the mythical island of Thymescira, populated only by Amazon women. Chris Pine’s Steve Trevor is the first man she has ever seen.

Their romance forms the backbone of the narrative, allowing her to see the contradictions of mankind, and his heroic sacrifice convinces her that mankind has redeeming qualities. In the follow up, Wonder Woman 1984, Trevor is resurrected via a wish. The main point of contention is that his resurrection means he possesses the body of a totally different man. Despite the film’s epic runtime, WW84 underdeveloped one aspect of its narrative: the clear flirtations between Diana and Kristen Wiig’s Barbara (who becomes the villainous Cheetah). In the comic books, all Amazons engage in same-sex relationships. As such, Diana has been portrayed consistently as bisexual, as has Cheetah. Their relationship or, more aptly, their lack thereof, seems dismissive of a fundamental part of each of these famous comic book characters.

Jenkins’ exploration of love could have extended to showing Diana and Cheetah falling in love and Cheetah’s villainous turn being the emotional point of contention. While the comic code authority put a stop to most explicit depictions of Diana’s attraction to women for some, her creator William Moulton Marston was a professor who theorised that the world would be better under the loving authority of women. Diana herself was based on two women, his wife Elizabeth Holloway Marston and their mutual lover Olive Byrne. Byrne was also the daughter of radical feminist Ethel Byrne and niece of Margaret Sanger. The fact that Wonder Woman was explicitly based on two bisexual women, and radical feminists, is as key to her character as the lasso of truth, yet in Wonder Woman and WW84 it is absent.

This allegation too is not backed up by solid evidence, seeing as it all drew from the writings of leftist Jill Lepore, one of the worst propagandists around, and Marston’s family wasn’t pleased with a would-be biographical film about him and the 2 ladies in his life. And what, is the magazine implying Cheetah should’ve become a villainess in the movie because she’d been jilted? Even if that’s not the case, depictions of lesbians as insane criminals is an awfully crude cliche that’d be better avoided. That aside, if WW’s ever been depicted explicitly as bisexual, it wasn’t until recently, when PC mentality took over comicdom for real.

In the end, the magazine article is one of the most self-serving insults to the intellect I’ve ever seen, by people who only care about narrow agendas, hijacking classic creations to further the same, and not about more serious issues plaguing the world.