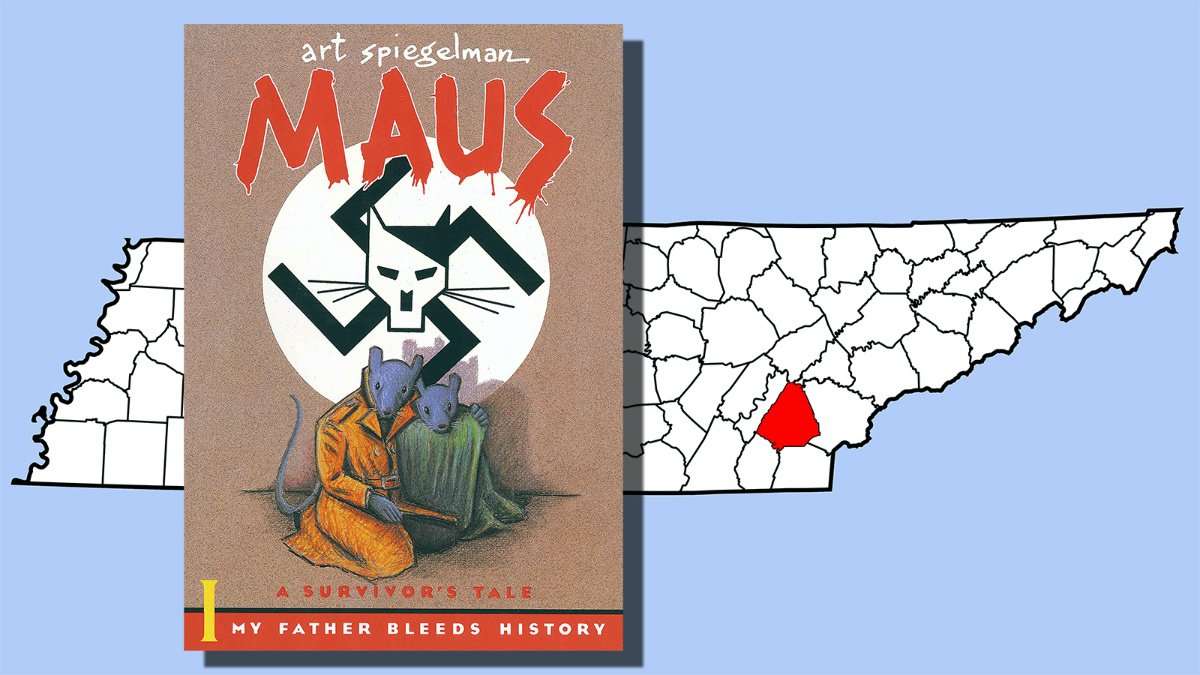 Far-left cartoonist Spiegelman’s experiencing something that was to be fully expected in the tragically politicized climate his side of the spectrum led to, as described by Reuters:

A school board in Tennessee has voted to remove the Holocaust-themed graphic novel “Maus” from its eighth-grade language arts curriculum, citing profanity and nudity contained in the Pulitzer Prize-winning work by cartoonist Art Spiegelman.

The 10-0 vote by the McMinn County Board of Education in Athens, Tennessee, located about 150 miles (240 km) southeast of Nashville, came on Jan. 10 but gained wide U.S. media attention on Thursday, ironically coinciding with International Holocaust Remembrance Day.

The board vote overrode a state-level curriculum review that had approved the teaching of “Maus,” based on the real-life Holocaust experiences of Spiegelman’s parents in Poland, with Jewish characters depicted as mice and their Nazi persecutors as cats.

The title of the two-volume publication, which became the first graphic novel to be awarded a Pulitzer, in 1992, is the German word for mouse.

In a CNN interview on Thursday, the author described his initial reaction to the ban as “total bafflement” and called the school board’s action “daffily myopic.”

Spiegelman, 73, said the board appeared from transcripts of its meeting to have “totally focused on some bad words that are in the book.”

The board, in a statement posted on its website on Thursday, said the novel was removed “because of its unnecessary use of profanity and nudity and its depiction of violence and suicide,” which the panel found was “simply too adult-oriented for use in our schools.”

To be quite honest, I think the board is making a hysterical mistake, based, if anything, on that this is a book drawing from historical contexts. Based on that, this is exactly why they shouldn’t be opposed to focus on nudity and violence the same way they presumably would when it comes to graphic horror movies and pornography tapes.

What’s really disturbing about this besides the school board’s decision, however, is that the leftist press decided to exploit this news for making it sound as though conservatives are literally behind this, and to defend Critical Race Theory:

The ban comes as Republican politicians around the country have seized on the teaching of “critical race theory” – putting the history of institutionalized racism into a larger instructional context – as anathema to public education, while calling for greater parental control in schools.

Oh, so that’s Reuters’ game? Blurring and obscuring the differences between this matter and a Marxist ideology that actually teaches hatred primarily against whites, and contrary to what apologists claim, it doesn’t teach history. Shameful that Reuters is making this sound more like a case of conservatives literally enacting censorship here.

I will say that, if the school staff behind this are right-wing, they’ve provided ammunition for left-wing fanatics. But if the school staff are leftists, then Reuters is actually letting them off the hook for a decidedly reprehensible action, and rendering the topic farcical.

But is ultra-liberal Spiegelman being altruistic when he raises objections to this? I’d spoken before about how this same cartoonist is one of the most anti-Trump activists around, and get the strange feeling he has no interest in taking issue with his fellow leftists for the censorious, deleterious atmosphere they’ve led to in the past decade. So, how does he expect to solve the current crisis that’s affected his work as well? Why, he practically admitted he may not be able to produce a book like Maus with the way things are going today. But does he realize leftism’s been the major reason for that? Again, he shows no signs of criticizing his own side for their deeds in this whole affair. 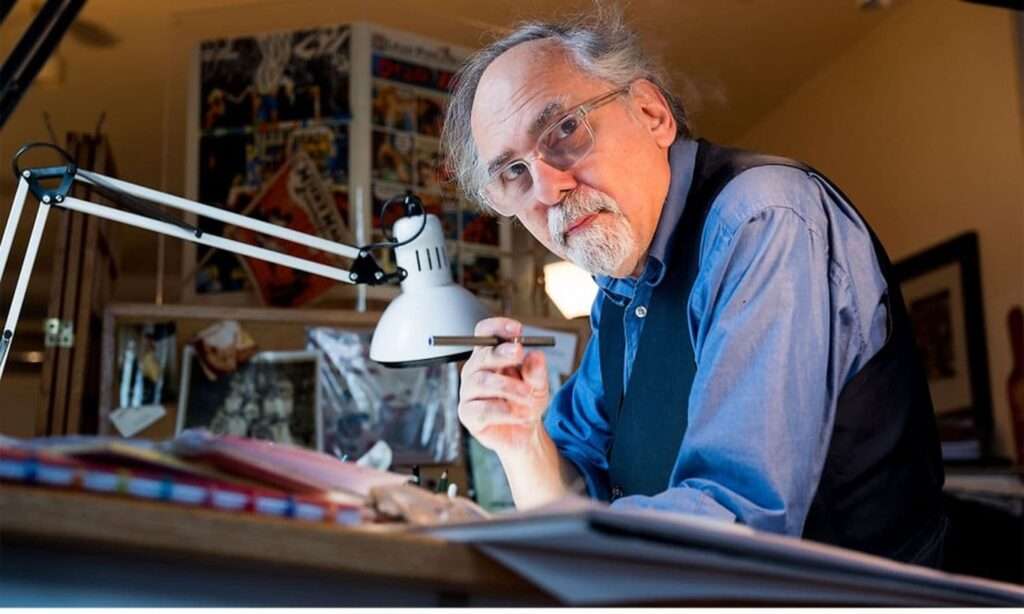 The Times of Israel/JTA reported that there’s been a backlash against the school board’s decision:

A rural Tennessee school board’s decision earlier this month to remove “Maus,” the celebrated graphic novel about the Holocaust, from its curriculum has attracted fierce backlash from other pockets of the state and beyond.

A nearby comic-book store is pledging to give away the book for free, an area church plans to hold a discussion on its themes and a college professor intends to offer free classes on the book to students in the county. […]

Nirvana Comics, a comic-book store in Knoxville, announced Thursday on social media that it would be giving away copies of Art Spiegelman’s Pulitzer Prize-winning book to any interested students, saying, “It is a must-read for everyone.”

According to local news station WBIR, the store was expecting a large shipment of the books to arrive soon, and was “in discussions with a much larger organization to expand the program.” […]

Seeing a would-be auteur like Gaiman weighed in on this, does even he realize the leftists he sides with have condoned censorship affecting these graphic novels? It’s uncertain, given how vague and superficial he sounds whenever he’s spoken about topics like these. 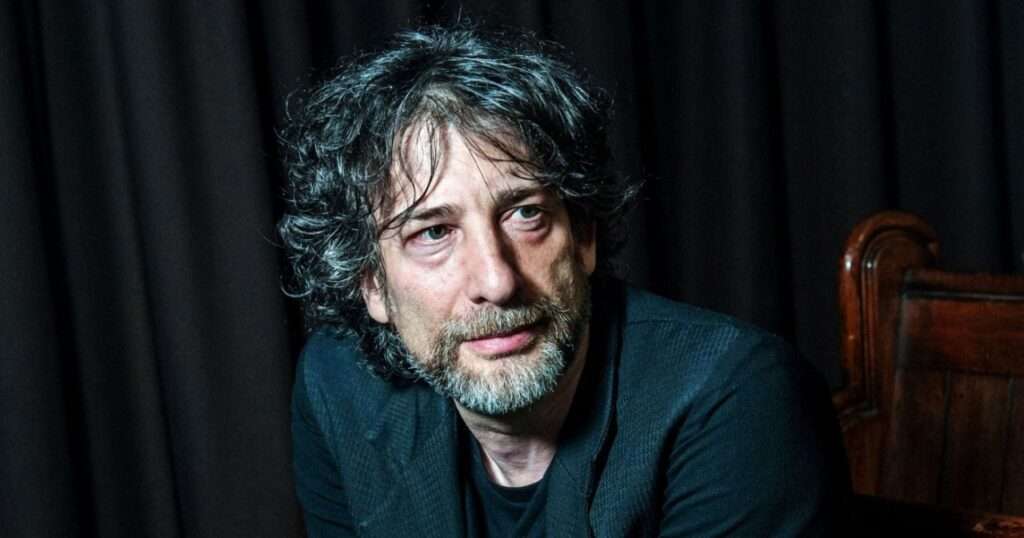 I think one of the saddest parts of this whole affair is that a writer at Yahoo is also exploiting this news to claim conservatives are the guilty party here:

Attempts by conservative activists to regulate how schools discuss race, sexuality and gender have contributed to an ongoing effort to remove books seen as controversial from school curricula and libraries.

The most recent high-profile example was Art Spiegelman’s award-winning “Maus,” a graphic novel that depicts the horrors of the Holocaust, being removed from a Tennessee eighth-grade language arts curriculum. The McMinn County School Board voted 10-0 to remove Spiegelman’s book on Jan. 10, but the story began to circulate Wednesday after a report from the Tennessee Holler. According to the minutes from the meeting, the use of curse words and “nakedness” were the impetus for the change.

[…] “You have these — they call themselves parents’ rights organizations — pursuing this censorship agenda and arguing that censorship is the proper solution, but once you start using book banning as a tool, where does it end?” Caldwell-Stone said. “So you end up with work like ‘Maus’ being on the chopping block, so what comes next?”

So only parental organizations are the worry, not far-left movements like the ones who believe PayPal use should be censored for all dissenters, or those who’re advocating censorship of classic books? It also says in Yahoo’s article:

Another organization involved is No Left Turn in Education, which has dozens of books listed on its website that it claims “spread radical and racist ideologies to students. They demean our nation and its heroes, revise our history, and divide us as a people for the purpose of indoctrinating kids to a dangerous ideology.”

The books listed are predominantly written by nonwhite authors, and on the same page, the group includes books that discuss LGBTQ themes and feature LGBTQ characters. Titles on the list include Ibram X. Kendi’s “How to Be an Antiracist,” Angie Thomas’s “The Hate U Give” and Sarah Hoffman’s “Jacob’s New Dress.”

And if these authors are teaching anti-white racism, not to mention indoctrinating encouragement to practice homosexuality and transsexuality, in some of the most stupefying examples of neo-punk subculture seen since the 1980s, that’s not a concern? Apparently not. But it’s to be expected the MSM would use this issue with Spiegelman’s books as an excuse to include irrelevant matters. 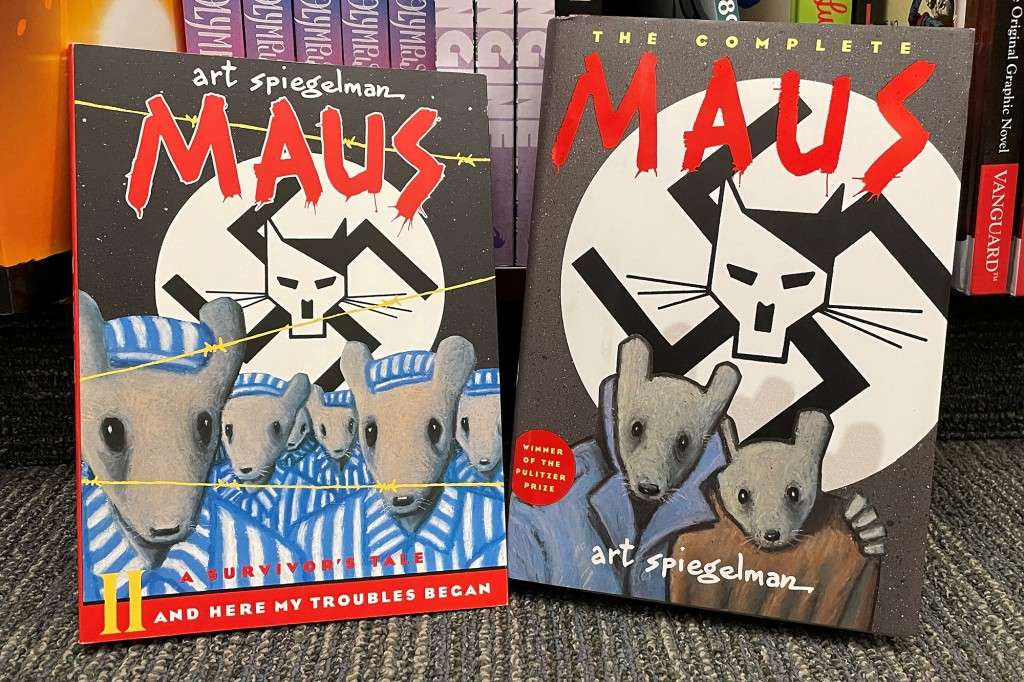 No matter how graphic some of the material in Maus is, I don’t think it should be removed from school curriculum. But it’s clear the MSM’s own reaction to this isn’t altruistic, and there’s only so many other comics they’re unlikely to defend if in jeopardy of censorship. For example, the Punisher, whose very own co-creator, Gerry Conway, as noted before, no longer respects, and probably never did. Why, what if the Spectre at DC, who was originally co-created by Jerry Siegel, is shunned the same way because Jim Corrigan was a police detective? Sooner or later, these sad possibilities are bound to happen, and nobody on the left in comicdom is likely to protest, because of all the defunding police propaganda they’re now embracing, a mindset that’s affected Mike Baron’s promotion for Thin Blue Line as well. Products like these, at this point, are unlikely to be seen in school curriculum either.