Screen Rant’s fawning over an issue of Thor where there’s a slam at the British Conservative party hidden in the text:

Marvel’s Thor comic took a swipe at the UK’s governing Conservative Party – the party of Prime Minister Boris Johnson – in its recent issue 12, echoing the well-known political refrain ‘never trust a Tory.’ Written by Donny Cates with art by Nic Klein, the line was spoken by Mr. Horse, the talking steed of Thor ally Jane Foster, aka Valkyrie, but it’s not the first time Marvel writers have taken a shot at the right-wing political party.

Created by writers Al Ewing & Jason Aaron and artist C. Cafu, Mr. Horse is written with the dialect and stereotypical personality of someone from the Yorkshire area of northern England. Marvel have gone so far as to publish a guide for how to speak like Mr. Horse, who rejected a more individual name as unnecessarily pretentious and possesses a disdain for “that Asgard” which echoes cultural expectations of Yorkshire antipathy to the more cosmopolitan London. Used interchangeably with ‘Conservative,’ the word ‘Tory’ is a common term in the UK which actually predates the political party but has become an interchangeable term for its members. Though, as here, it can be used derisively, it isn’t generally considered to be inherently pejorative or insulting when used by itself.

While there are legitimate issues for which you could attack certain Tories – such as their failure to prevent Muslim interlopers from infiltrating the country either through the Chunnel or by sea craft, to say nothing of their otherwise disastrous efforts to protect the public against Covid19 – something tells me this story’s writer has no interest in doing so. And if the site thinks their attempt to downplay the subtle insult to conservatives is convincing, forget it. If anything, this demonstrates scriptwriter Cates is quite the ideologue.

The insult happens during a moment between Mr. Horse, Throg (an amphibian version of Thor), and Lockjaw – a huge, teleporting bulldog – all animal allies of Marvel’s God of Thunder. Created by Stan Lee and Jack Kirby, Lockjaw is the pet of the Inhuman royal family, and it’s his regal connections that Mr. Horse first objects to, responding to the dog’s aggressive greeting with, “Ye toffee-nosed royalist wazzock,” again echoing a stereotypical animosity towards supporters of Britain’s monarchy associated with the Yorkshire area. When their mutual ally Throg brokers a peace, Mr. Horse relents, but ends by warning the amphibian hero, “Just watch thyself, mind — tha can never trust a Tory.” 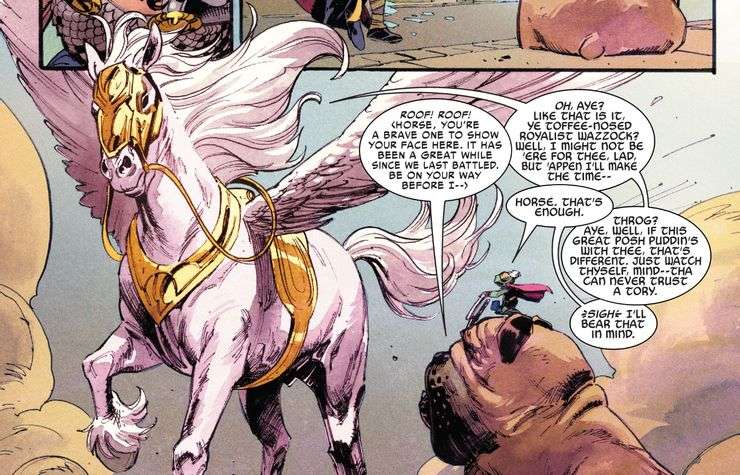 Well no realist is saying you should automatically trust right-wingers – the establishment GOP members certainly betrayed Donald Trump during the 2020 election (especially Mike Pence) – but why should you think the UK Labour party is any better? They were the ones who brought about freaks like Jeremy Corbyn, only distanced themselves from him awfully late, and don’t seem to have done much to prove they’d want to improve the UK’s fortunes. Oh, and if stereotypes are a bad thing, why are we being told it’s great if “Mister Horse” has a stereotypical persona? Wouldn’t an archetypical persona sound better? Why does the anthropomorphic character even have such a corny, generic name? As the article continues to lecture:

It’s an amusing moment intended to show that the interplay between the animal sidekicks is a good deal more complicated than fans might assume from the outside, but also a direct political reference on Marvel’s part, referencing a major political party and using a phrase that’s still very much part of contemporary political discourse. Marvel have been much more coy in relation to American politics, with even the politically charged Sam Wilson: Captain America studiously avoiding direct barbs at specific mainstream political organizations.

And they have no issue with potentially insulting stereotypes Cates’ story is drawing from? I don’t see much amusing about the moment, no matter what I think of the UK Tories. Not to mention their assertion Marvel’s more coy in dealing with US politics is laughable, because when Axel Alonso was EIC, they went overboard in many ways. It was after C.B. Cebulski took the role that they scaled back the embarrassments, but apparently, they believe it’s easier to attack a foreign country’s political scene than their own. 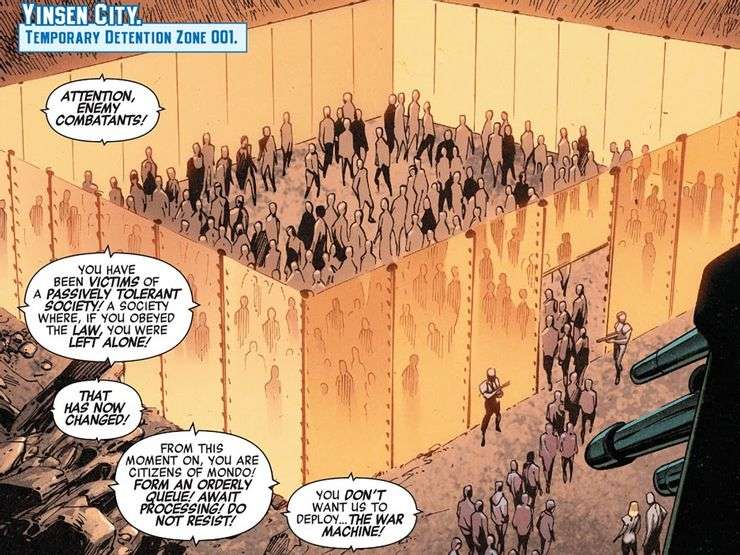 In contrast, Marvel have been willing to engage directly with British politics in past stories. Captain Britain and MI13 included a favorable appearance from Labour Prime Minister Gordon Brown managing a super-villain crisis, while Captain Britain and the Mighty Defenders saw hero Faiza Hussain, aka Excalibur, up against a militarized police state who declare, “You have been victims of a passively tolerant society! A society where, if you obeyed the law, you were left alone!” – a paraphrased version of widely criticized comments by Conservative Prime Minister David Cameron, who said, “For too long, we have been a passively tolerant society, saying to our citizens ‘as long as you obey the law, we will leave you alone.'” Less direct, Marvel’s ongoing comic The Union charts the adventures of a failing UK super-team seemingly assembled as a hasty response to Brexit.

Yes, that’s just the problem: they take a partisan approach, favoring liberals while shunning conservatives, and the character of Faiza Hussain was an early example of the editors’ pro-Islamic bias that became common post-2000. I’m guessing the paraphrase in the CB story they’re citing is meant as an allusion to the leftist “islamophobia” propaganda. And it won’t be surprising if Marvel’s siding with the anti-Brexit crowd to boot.

Though a worldwide brand, Marvel is enmeshed in the American culture which shaped it, allowing those with strong views on UK politics to express themselves more directly than their American counterparts. British writers have long had a voice in American comics – a medium which experienced its own ‘British Invasion’ of UK talent – and while the moment is a far cry from Thor himself expressing a political preference, it’s still a surprisingly direct reference to ongoing, real-life politics from a company which usually plays things a little closer to the chest.

That wasn’t the case when Alonso was EIC, as noted before. Why, it was hardly the case when Joe Quesada was EIC (2006’s Civil War, anyone?). Certainly UK-born writers have maintained a presence in comicdom for many years, with Chris Claremont being one of the earliest. But the difference is that like their US counterparts, the early contributors usually kept their political biases to a minimum, and didn’t allow the tone to overwhelm the entire story. Now, certainly as seen in the past decade, we’ve had an overflow of partisan politics that hasn’t gone away even after Cebulski took up the EIC position (speaking of which, he hardly gives any interviews now, if at all, echoing the laughable approach used by his DC counterparts). And this Thor issue is a telling clue there’s still political cancer littering Marvel, with the current difference being that they believe it’s easier to get away with attacking foreign conservatives than domestic ones. But you know the old saying, “never look a gift horse in the mouth”. That’s surely what Marvel’s leftist staff would like to rely upon for foisting their propaganda upon the world at a time when it simply won’t do, under the guise of a generically-named member of the equidae species.

And it’s inaccurate to say Marvel, from a modern perspective, is merely shaped by US culture, when it’s actually the ideologies of the modern staff they’re shaped by. Hence, all this political garbage we’ve been getting all these years.