ComicBook  reports that one of Marvel Comics’ “wokest” writers, who spent the past decade dumbing down their output, also worked as a story consultant on the new movie starring Thor’s mortal girlfriend, Jane Foster:

One of the most prolific writers on Marvel’s Thor comics was a consultant on the upcoming Thor: Love and Thunder. The fourth movie in the Thor franchise is loosely based on The Mighty Thor comics that featured Jane Foster’s time as the Goddess of Thunder. Natalie Portman returns to reprise her role as Jane Foster, wielding a re-forged Mjolnir as our heroes fight Gorr the God Butcher, played by Christian Bale. Jason Aaron was the writer of Thor/The Mighty Thor, and he revealed during a recent signing that he was consulted on Thor: Love and Thunder. 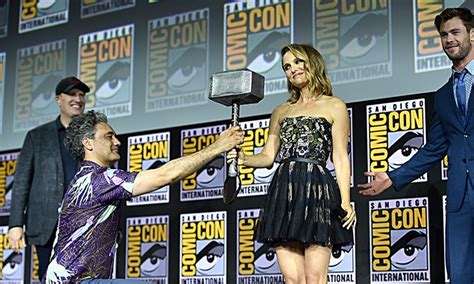 “A thunderous #SignatureSeriesSaturday with a quick message from writer @jasonaaron!” the CGC Comics Twitter account shared. “Aaron is here for his Private Signing, and we had to ask him about the topic that’s on everybody’s mind. Check out the video to hear what he has to say about the upcoming #ThorLoveAndThunder” A video was attached to the social media post, where Aaron shared his consulting role on the Marvel Studios project.

Ugh, this is truly dismaying, but hardly surprising, considering what a SJW he’s proven to be in the span of a decade.

So if it turns out the screenplay is dripping with woke ingredients, it’ll be expected, based on studio owner Disney’s recent track record. One more reason to avoid the new Thor sequel and stay far away from it. Aaron also created that supervillain called Gorr, and a character with a name like that is another reason to decidedly stay away; it’s just so revolting. More proof how much the Marvel movie franchise is continuing to deteriorate.