Beginning today, SiriusXM is the new destination for exclusive new original podcasts from Marvel Entertainment! In addition to SiriusXM’s recently-announced slate of original podcast series and highly-curated selection of popular shows, SiriusXM subscribers with select streaming plans will be able to tune in to exclusive new podcast series like Marvel/Method, a weekly podcast on Marvel fandom hosted by Method Man; Marvel’s Declassified, a nonfiction deep dive into the history of Marvel Comics; along with a thrilling new multi-part original scripted audio series, Marvel’s Wastelanders, kicking off in 2021.

SiriusXM subscribers can also listen to several popular ongoing Marvel podcast series like This Week in Marvel, Women of Marvel, Marvel’s Voices, and Marvel’s Pull List – all before they can be heard anywhere else – via the SiriusXM mobile app or online at siriusxm.com/podcast2020. Afterward, fans will also be able to tune into these podcast series on Marvel.com.

“Marvel has always told stories to entertain and inspire. And just as Marvel’s stories began in the comics and grew into the rich universe we know today, we see audio storytelling as just the beginning of unlimited possibilities for our brand,” said Dan Buckley, President of Marvel Entertainment. “Our fans are consuming content more than ever, and now wherever they are, they can explore the Marvel Universe through brand-new and ongoing podcasts that bring Marvel together with the world and people around us, along with exciting new scripted content coming on SiriusXM’s platform next year.” 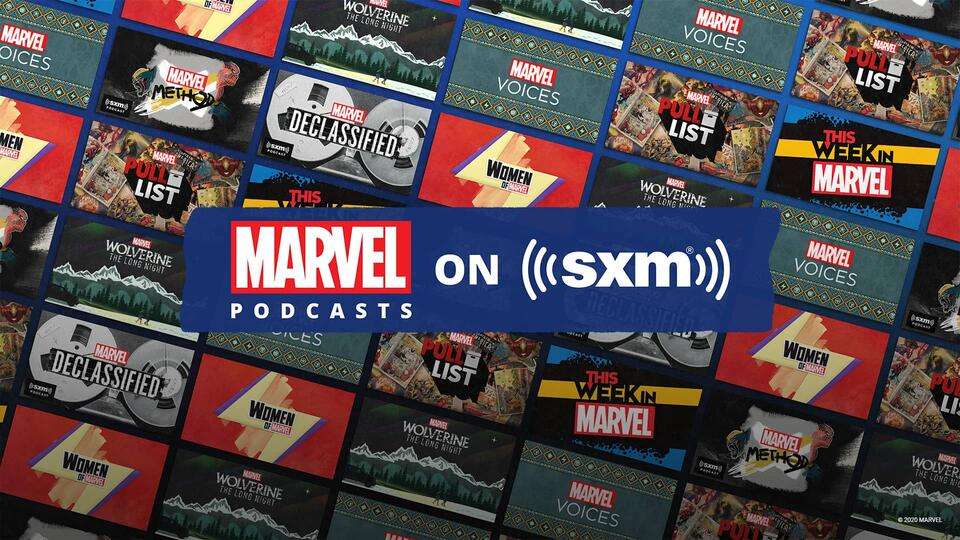 Exclusive new original podcasts from Marvel and SiriusXM include:

The ultimate remix of Marvel fandom! Marvel/Method is a SiriusXM exclusive weekly podcast where actor and rapper Method Man interviews celebrity guests about life and all things fandom, Marvel comics, music and more. Guests will include DMC, Killer Mike, Jemele Hill, and many more!

Marvel’s Declassified is a nonfiction narrative podcast focusing on the rich, dynamic, and evolving history of Marvel Comics – as told through a contemporary lens. Each episode is hosted by writer and comic book expert, Lorraine Cink (author of Powers of a Girl, co-author Marvel Absolutely Everything You Need to Know, and Ultimate Marvel) and acclaimed journalist and critic Evan Narcisse (author of Marvel’s Rise of the Black Panther). Utilizing unique access to writers, artists, editors, and industry insiders who have shaped key storylines and witnessed firsthand the historical shifts within the comic book industry, we get the real story of Marvel Comics as it could only be told by the House of Ideas itself. (Scheduled to premiere December 8th)

And SiriusXM subscribers will be the first to hear Marvel’s popular podcasts including:

This Week in Marvel:

Hosted by Ryan “Agent M” Penagos, Lorraine Cink, and James Monroe Iglehart, This Week in Marvel is the inside access to all the latest Marvel comics, TV, movies, games, toys, and beyond! (Available now)

Each week, Ryan “Agent M” Penagos and Tucker Markus give you exclusive previews of all the new Marvel comics that will be waiting for you in stores, along with a special guest to spotlight their favorite comic book moments in the Marvel Universe! (Available now)

Hosted by Ellie Pyle, Angélique Roché, and Judy Stephens, the Women of Marvel assemble to show how people of all backgrounds are making a powerful and positive impact on our stories. (Available now)

Marvel’s first scripted podcast, Marvel’s Wolverine: The Long Night, comes to SiriusXM and fully voiced in Spanish! The series will feature new voiceovers by Narcos: Mexico actor Joaquin Cosio among others. (Scheduled to premiere in December)

“The popularity of podcasts continues to skyrocket, and we’re thrilled to offer our subscribers an amazing selection of podcast entertainment and expand our unmatched variety of must-hear programming,” said Scott Greenstein, SiriusXM’s President and Chief Content Officer. “With exclusive new series from entertainment powerhouses like Marvel and Kevin Hart, SiriusXM originals featuring some of our most popular hosts, and a collection of top shows from leading providers, our subscribers now have direct access to our new destination for podcasts without ever leaving the SiriusXM app, and this is just the beginning.”

Dive in to all of Marvel’s newest audio shows and series on SiriusXM.